all about that one dream lyfe

this weekend was the bean's first foray into the world of competitive cheer.  yeah, she was on her school cheer team for the last five years, but this time she's on a team whose sole existence is based on competitions - no games, no pep rallies.  it's all very different and pretty intense.

saturday was picture day.  because of the super teased hairstyles that are required of cheerleaders, i'd bought a couple of faux headpieces to use in an effort to make things easier and to avoid having to do so much backcombing on the bean's actual hair.  i hate doing it, it makes such a mess and trying to brush it out and wash out all the product is such a pain in the butt.  check this thing out: 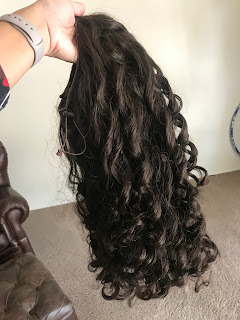 these things are created especially for cheerleaders who wear their hair in high ponytails and teased up like crazy.  the video tutorial with instructions on how to attach this thing seemed simple enough though - just throw her natural hair up into a high bun and then use the attached combs and drawstring cords to hold it in place.  before: 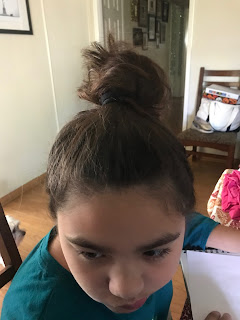 and after, with the equally ginormous cheer bow in place: 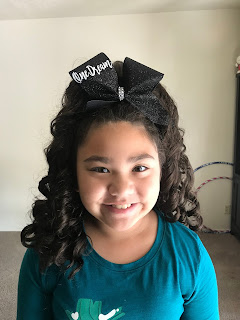 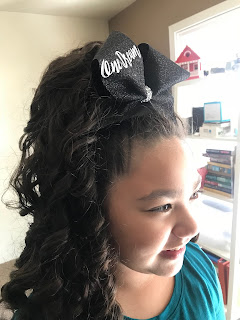 i went through the process a couple of times to make sure i had it down, and with that done i sent the bean to go get dressed in her uniform.  besides the fitting this was the first time she was going to spend any time wearing it, and we were both excited.  when she emerged from her room i made her pose for me in the usual spot: 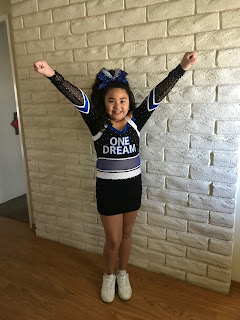 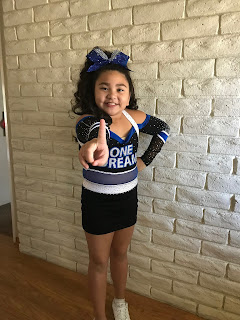 i die.  she looks about sixteen with all that hair (which she decided she wanted to wear for her pictures).

we hopped into the car and drove the short distance to where the girls were meeting up, and i got her to take a quick selfie with me: 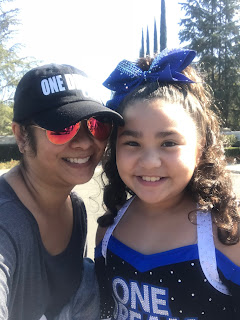 it was a beautiful day, warm and sunny, and this fountain served as the perfect backdrop for their portraits. 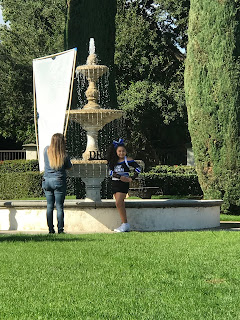 she did a "buddy" picture with a couple of her friends too: and then all three teams within the one dream squad got together to take one giant group photo.  the younger, new-to-cheer girls are called "hope," the intermediate girls like the bean are on the "believe" team, and the oldest and most experienced group is "inspire."  there's about 60 of them altogether. 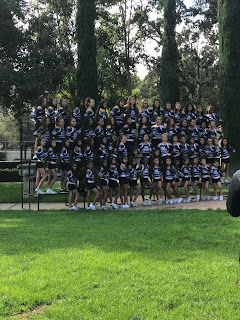 after going home to grab some lunch and get changed out of those uniforms, the girls gathered again at the gym to get one last practice in before the next day's competition.  a showcase was scheduled that evening too, where the three teams would get to show off the routine they'd been working so hard for the last five months to perfect.  friends and family were invited to the showcase, and it was a great chance to see the girls in action if you couldn't get to any of the competitions.  the bean was super stoked that one of her BFFs and her family were there, and she beamed as she saw them in the audience with me and the hub. 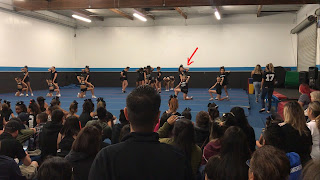 they'd brought her a beautiful bouquet of pink roses, which she happily accepted once the showcase was over. 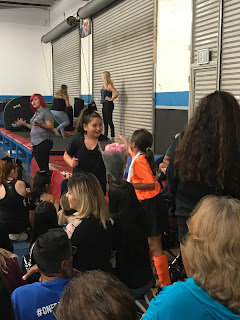 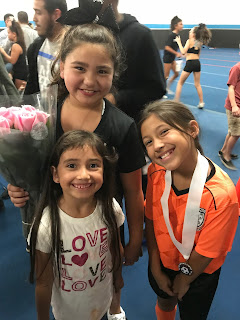 after that it was time to head home, grab some dinner and rest up for the next day.  the first competition jitters were setting in, and along with the excitement of picture day and showcase it wasn't hard to get her to go to bed at a decent time.