so much fun on a random thursday

my hair has been looking pretty ragged lately, so i was excited when i finally got to go in for my appointment to freshen things up a little.  because i'm so old, i see my hair lady every 3 weeks as it is to cover the grays.  but this time i was getting the whole shebang - roots, a trim, fresh highlights and more pink.  yay for me!

after using the fantastic new 10-minute color on those grays, she trimmed it and then did her thing with the balayage process.  and look, fun purple foils! 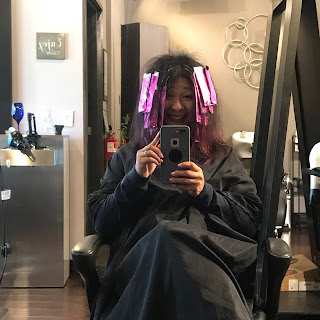 for some reason though, that 40 volume stuff wasn't lifting the color out of my stubborn ass hair quickly enough.  i love that we have to spend time covering the non-colored parts and move on to trying to pull the color out of other parts.  very push-me-pull-you of my hair.  and so i got to sit under the dryer that made me look like i was wearing a helmet and getting ready to blast off into outer space. 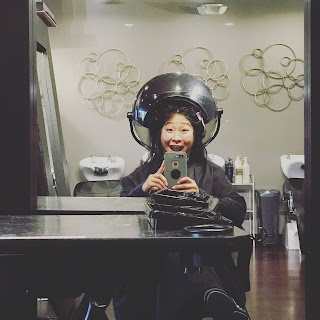 because time was ticking and i had to get to school to pick up the bean, we pushed it to the very last possible minute before she took the foils out, washed out the bleach and dried my hair to move on to the next step.  this is...less than cute. 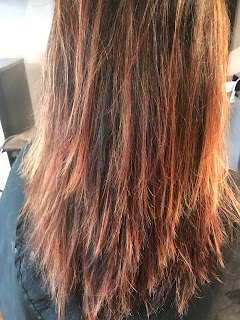 i got a pink scalp! 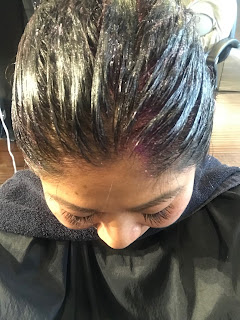 and of course, with a wave of her magic wand it was all done and dried and styled all pretty with a round brush.  i'll admit that it's not quite as pink as i'd like, but i can fix that with some of that color depositing deep conditioner i've got stashed away. 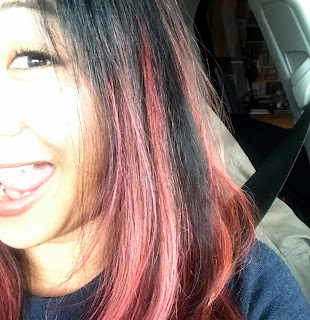 to make the day even better, look at what appeared at mcdonald's that very day: 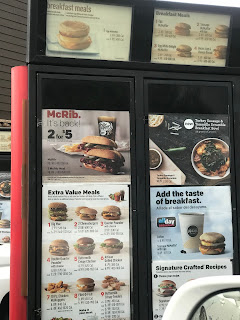 no, i didn't get two of them, but i sure did chow down on the one i did take home.  and as soon as the old lady got home and the bean was done with her music lessons, we hopped in the car to head down to anaheim for a little disney magic. 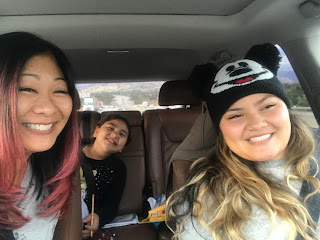 california adventure was doing a special extended sneak peek at the upcoming movie "coco," and that afternoon it was open to just annual passholders. 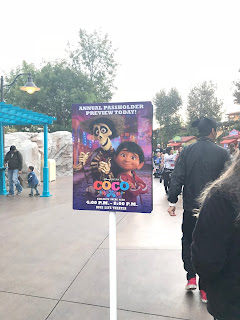 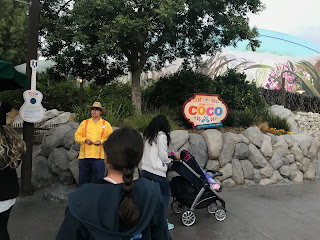 in the waiting area of the theater, cast members were standing at a table handing out some swag - cinch backpacks that came in mighty handy when we decided it wasn't cold enough for our jackets after all. 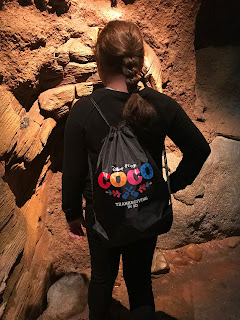 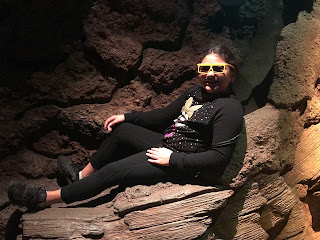 the preview was really fun to watch, and i'm really excited to see the movie when it comes out on thanksgiving. 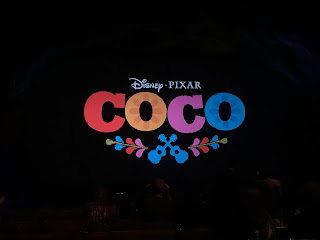 our next stop after that was the boudin bakery tour for our free piece of delicious sourdough bread. 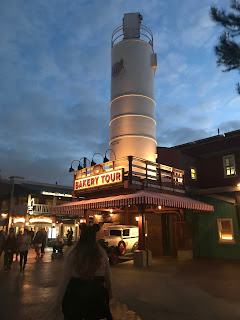 as we walked along the self-guided tour, we watched cast members work some magic as they created some of their groot-shaped loaves of bread.  they take a piece of flattened-out dough and place it carefully under this contraption: 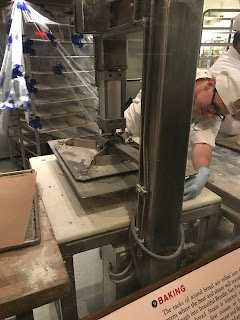 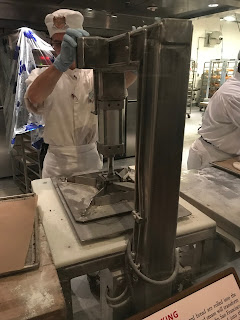 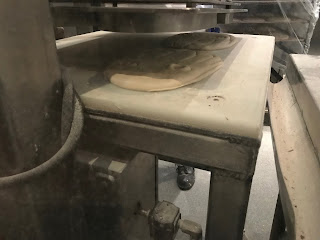 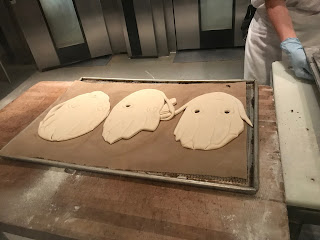 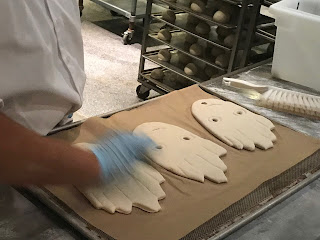 a stop at ghirardelli is always in order after that bakery tour, because they hand you a free piece of chocolate at the entrance.  the old lady and i kind of had a bet about what kind it would be - i thought they'd already have some sort of holiday sweet out, but she thought it was too early.  but look: 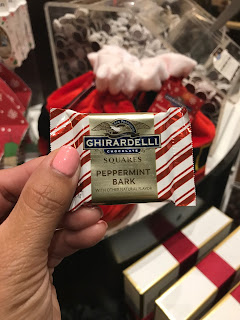 they're doing a bunch of prep for the holidays already, with all of the halloween stuff long gone and some christmas decor already up.  disneyland officially kicks off the holiday season on november 10th, so they've only got so much time to get it all done.  the kiosks for the food festival are already in place, too. 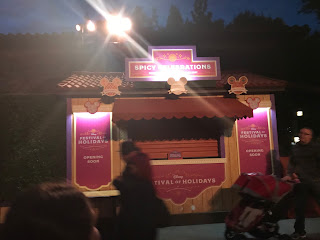 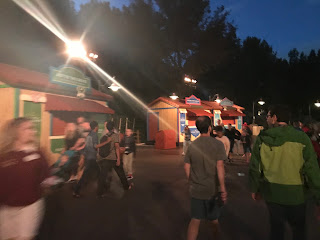 we decided to head across the way to the disneyland side to grab some dinner and look around, and as we walked over i noticed how eerie the sky looked. 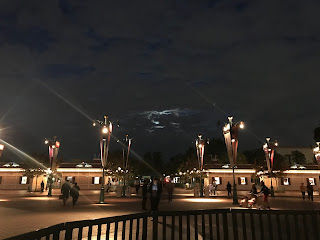 plaza inn is always a favorite spot, where the bean and i get some of their delicious fried chicken and the old lady either opts for pot roast or pasta.  after we finished eating we went over to check out the castle, which they're also starting to decorate for the holidays.  castle selfie time: 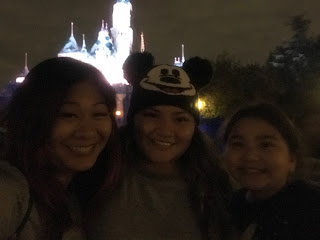 i don't know if you can tell, but the "snow" is making an appearance on the castle. 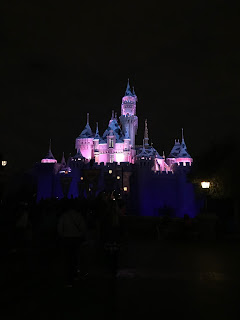 i hadn't yet had a chance to ride the haunted mansion with its "nightmare before christmas" overlay this year, so that ended up being our one ride for the evening. 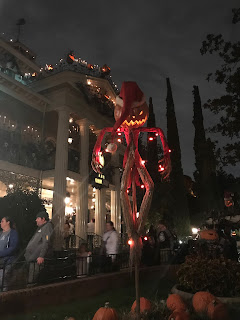 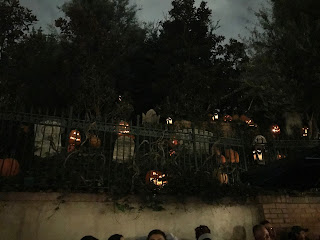 we grabbed a couple of treats on our way out - a mickey krispy treat for the bean and a housemade peppermint patty for the bean, plus a hot cocoa for the old lady. 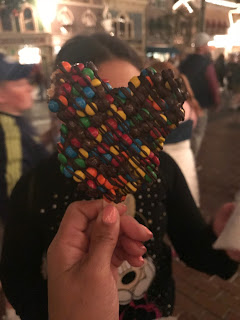 and then we burned off all those calories as we trudged up the stairs at the parking structure all the way up to the donald level, which is just below the very top.  and the "mean girls" fan in me had no trouble remembering where we were parked, because as we pulled in i read "7G" as "kevin g."  i know, i'm a dork. 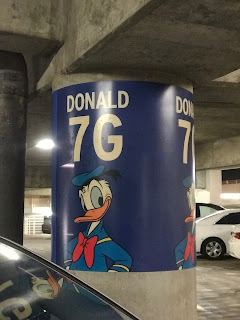 it was a short and sweet visit, but we squeezed in a good bit of fun in those few hours.  these are the times that i really appreciate having an annual pass - head down, grab dinner, ride a ride and enjoy a treat.  easy peasy.
at November 03, 2017

Email ThisBlogThis!Share to TwitterShare to FacebookShare to Pinterest
Labels: christmas is coming, disneyland