because of crazy scheduling conflicts, we decided to bump up our troop scoutsgiving potluck super early.  with the troop picking up the turkey and gravy, the girls sat down and decided amongst themselves who would bring what, and the bean decided that she wanted to bring sweet potato casserole.  it's her favorite thing to eat on thanksgiving, and while i was out shopping for the ingredients i thought it would be a great idea to have her do all of the prepping under my supervision.  she loves to cook anyway, and it's always a good idea to let her increase her skills in the kitchen.

with her sister's help, she found the peeler in the utensil drawer and got started on peeling the sweet potatoes. 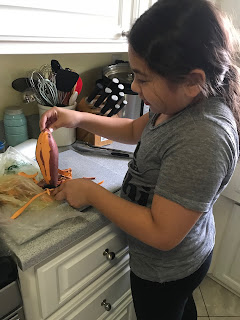 i showed her to hold it on the cutting board and chop it into fourths, but after a few tries her fear of that sharp blade got the best of her, so i took over for the rest of the chopping. 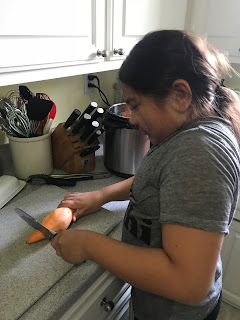 we decided to take the easy way out and pop the potatoes into the instant pot instead of the traditional boiling method, which was actually pretty fantastic.  we didn't have to babysit them and they were cooked in half the time.  she measured out the rest of the ingredients, poured them into a bowl with the cooked sweet potatoes and busted out the hand mixer.  it was easy to get them done, and she was pouring them into the pan and smoothing the top in no time. 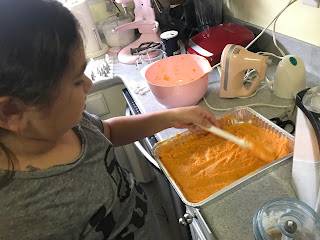 after she mixed up the topping and sprinkled it all on, the casserole baked for about half an hour and voila: 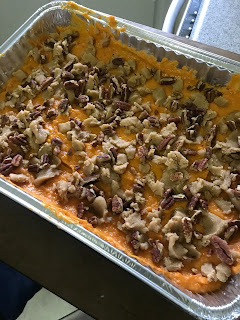 it was delicious, and she was pretty proud of herself when we served it up at the potluck.

and then on sunday morning, she came into our room and announced that we were not to go anywhere and that she was going to serve us breakfast in bed.  she didn't have to ask us twice - we were more than happy to sit back and relax, catching up on emails and social media while we listened to all the activity happening down the hall in the kitchen.

she burst back into the room with two tv trays, because she said she didn't want us to worry about the plates falling off the bed.  she scurried back and forth between the kitchen and our room, bringing a glass of orange juice for her daddy and some milk for me, along with place settings and then she proudly brought in the breakfast she'd been slaving over - scrambled eggs with cheese and diced ham with peanut butter & nutella toast for me: 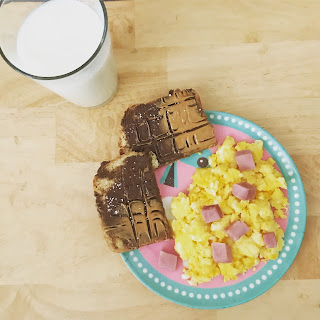 and peanut butter and jelly for the hub. 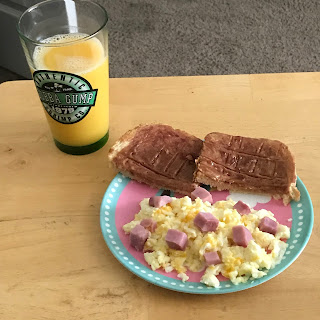 she did a fantastic job, and we stuffed ourselves silly.  it was all super delicious, and i can't wait to see what else she comes up with next time.
at November 09, 2017

Email ThisBlogThis!Share to TwitterShare to FacebookShare to Pinterest
Labels: girl scouts, the bean can cook