having halloween on a tuesday kind of sucks because it's a school night, and who wants to have to rush through things to get to bed on time?  the only saving grace we had was that tuesdays are the only weekday that the bean doesn't have a scheduled extracurricular activity besides her after school math tutoring.

her school doesn't celebrate halloween, but the kids were allowed to break from their uniform for the day and wear an orange shirt if they had one.  of course, she decided to spring this on me that very morning, and after going through both of our closets and coming up with nothing, she managed to borrow a denver broncos tee from her sister to wear.

with that crisis averted and her happily dropped off at school, i headed off to barre in one of my old running costumes to participate in the costume contest.  there were only two of us in attendance for that class, and we realized that it was likely due to parents staying at school for the morning halloween costume parades.  and since the other lady didn't wear a costume, i won the prize by default, heh. 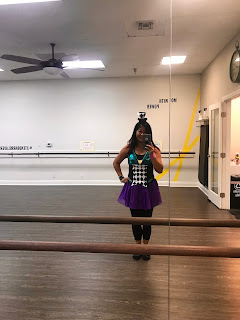 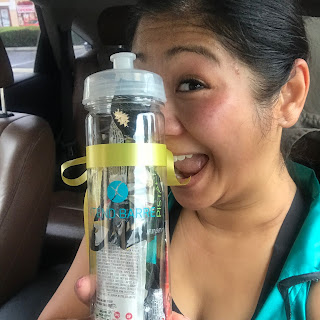 although i'd been under the impression that the bean's class wasn't really doing much aside from an art project followed by a little treat and watching a movie, a few texts with the other room parent brought me back to school to help out.  there were a few other parents there as well, so i wasn't really needed, but being the "official" room parent i kind of felt obligated to make an appearance.  the bean was happy to see me anyway, and so it was all good. 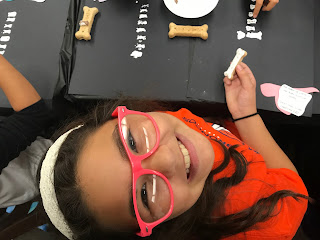 they were using milk bones in several different sizes dipped in white paint and stamped onto black construction paper to create a skeleton, which was their current focus in science class. 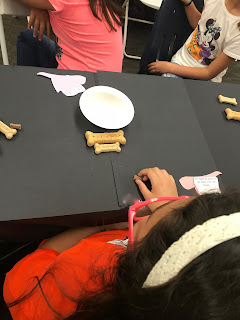 when that was done, the kids headed off to recess while we stayed behind to clear off the desks and distribute the treats - a cookie, a juice pouch and a little bag of candy. 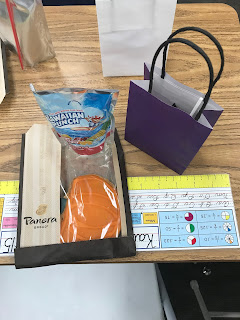 the other moms and i headed over into the room next door to take a peek at the pumpkin decorating contest that the 5th graders were having.  "get some ideas for next year!" the teacher told us as she opened the door.

there were some really fantastic, super creative pumpkins displayed.  here's just a few of my favorites: 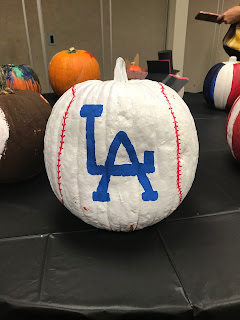 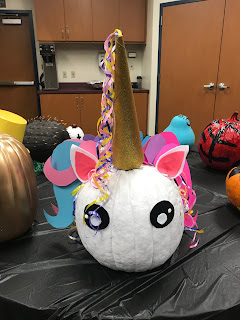 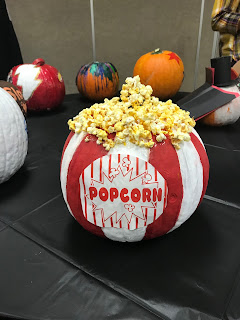 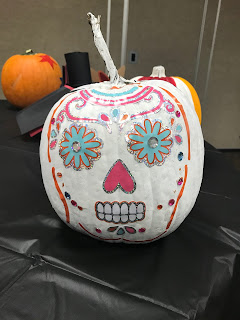 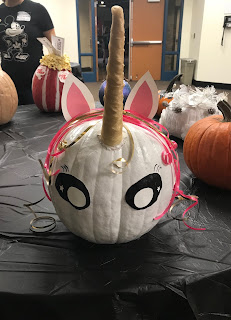 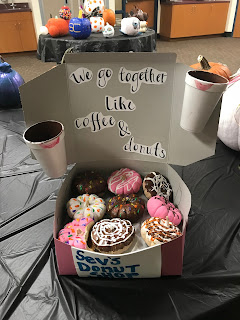 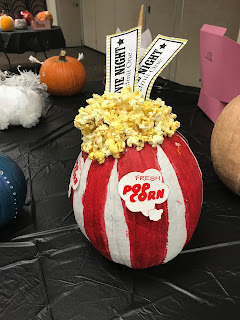 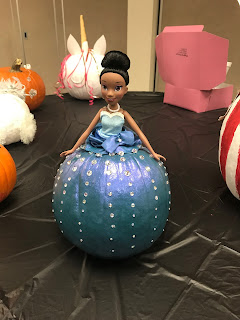 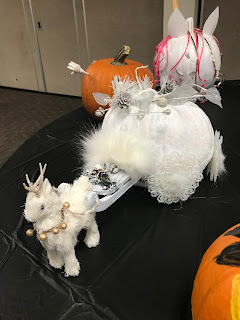 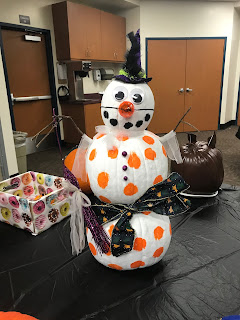 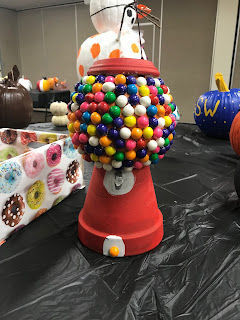 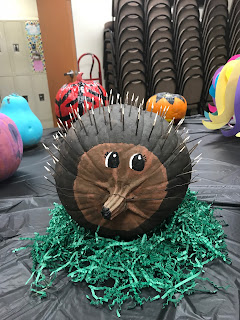 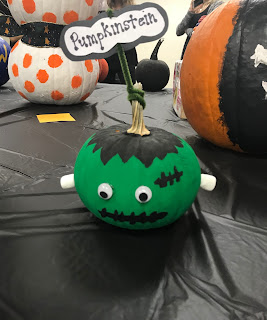 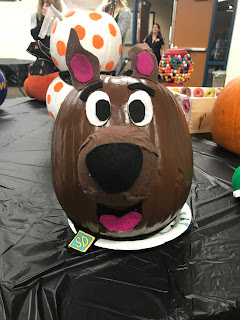 by the time we were done checking them out, recess was over and the kids filed back into the room, excited to see the treats waiting for them on their desks and spend the rest of the school day hanging out and watching "it's the great pumpkin, charlie brown." 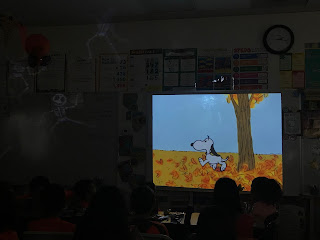 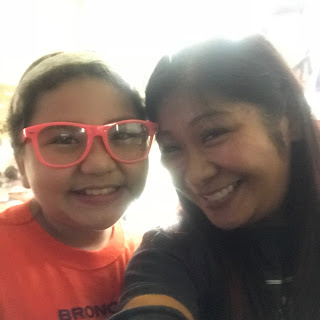 later that evening, we met up with my co-leader and her family to do a little trick-or-treating in downtown glendora.  we'd not been there before, and finally got to check out the famous "pirate house" on the main drag. 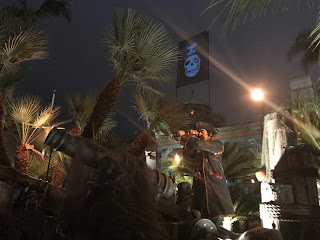 a local church sponsors "halloween block parties" held at some of the homes of their members throughout the area, and we stopped to check one out.  there were free hot dogs, games, a bouncer, and they even had the dodger game on, which attracted quite a few parents. 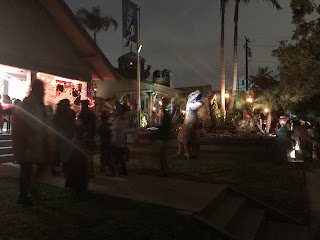 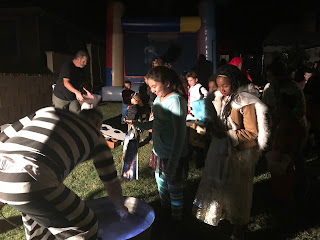 a lot of homes were all decked out for the holiday, and some were cute while others were pretty creepy. 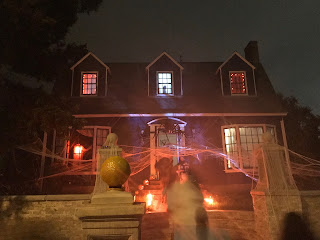 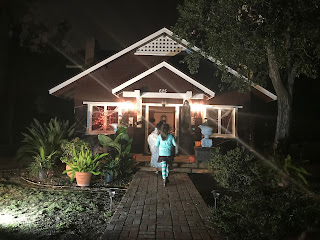 when we were all done, we got a group photo of the kids (yep, the old lady included): 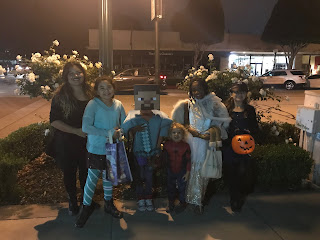 and the parents, too. 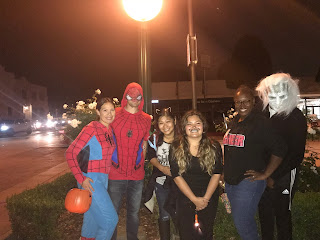 on our way back to the car, a friendly reminder from one of the bazillion churches on every corner: 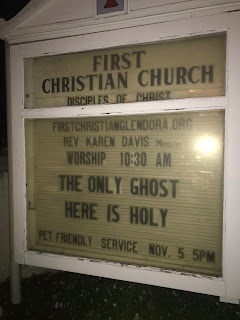