i'm such a room parent fail

it's hard to believe that thanksgiving is next week.  i know i say this every year, but seriously...where does the time go?  2017 has literally flown right by and it feels like a big ass blur when i try to think back on what we've done this year.

i got to join the bean and her class a couple of days ago for their thanksgiving party, where we'd decided to keep it nice and simple.  we put together a sandwich bar - hawaiian rolls, turkey, cheese, mayo, mustard, pickles.  and i learned quite a lesson as they started digging in - 9- and 10-year-olds like to eat.  a lot.  especially when hawaiian rolls are involved.  holy crap.  we definitely ran out of food a lot faster than i'd anticipated.  oops. 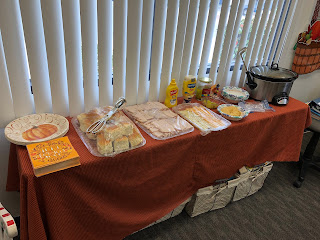 and then as we started dishing out the soup, we found that the crock pot had somehow failed us.  it was super hot to the touch - like hot enough that i burned a finger just testing to see if it was warm - but the soup inside was stone cold, like straight out of the fridge cold.  i ended up having to dish out bowls and warming them two at at time in the microwave.  that was fun.

still, the kids were somewhat satisfied and happily ran outside for recess once they'd gotten their fill.  once they got back, they separated into their two classrooms to work on a fun thanksgiving-themed craft together before coming together again in the presentation room next door.  there they got to spread out and sit at tables that we'd set up with the makings of another craft - this time, a fun edible one.  they had plain sugar cookies on a plate with tubs of frosting, candy corn and other adornments all ready to go, and they were super excited to get started. 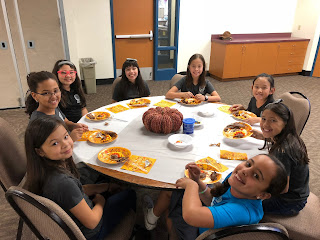 it was fun watching them work on their cookies, which magically turned into turkeys as they added all of the toppings in the order they were given. 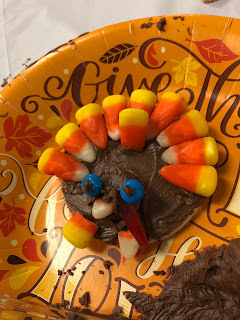 and the bean said that the cookies were delicious, even though she doesn't typically like frosting (i know, so weird). 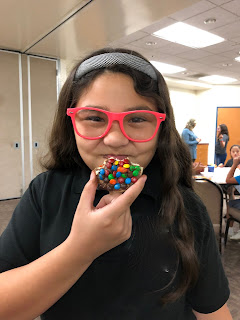 she let me get a quick selfie in before they settled down to watch "a charlie brown thanksgiving." 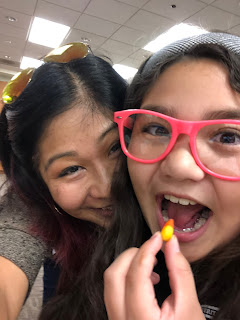 and now we have all of next week off to relax and unwind a little.  it'll be nice to take a break, and we have some fun local stuff planned as a family.

Email ThisBlogThis!Share to TwitterShare to FacebookShare to Pinterest
Labels: thanksgiving