the bean and i were up bright and early the next morning to get her ready for competition.  we'd been to a workshop led by the cheer coach to show us how their hair and make-up was to be done, and after years of dance recitals and things, i was feeling pretty confident in my skillz to get it right.  turns out that the hairpiece i'd bought wasn't going to work after all...they wanted the ponytails to be teased high and straight with some beachy, loose curls at the bottom.  yarg.  at least she'll have some pretty cute cheer portraits this year, i guess.

along with the uniform, the coaches provided each girl with a cute little personalized makeup bag and all of the makeup in the right shades that they wanted them to wear for competitions.  i really like that - and this way they make sure that everyone has everything they need without having to shop for stuff and risk the possibility of not matching. 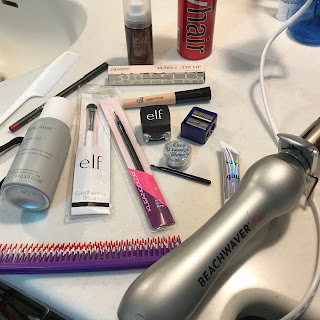 with the help of the old lady's beachwaver curling iron, multiple hair products, two different teasing combs and some extra-strength hair ties i managed to get her hair properly teased and high-ponytailed. 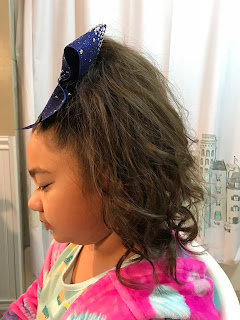 next we tackled her least favorite part - the make-up.  we'd seen at the workshop that it was pretty simple, so i was hopeful that we could get through it quickly without tears or fighting.  there was glitter for the eyelid, black gel liner for a winged eye look, and a really pretty shade of red for the lips that we saved for the very last minute.  i think i did a fairly decent job of duplicating the desired look: 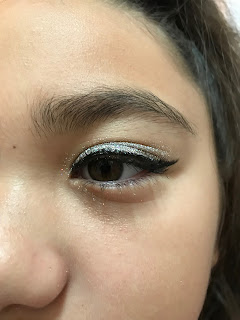 once all that was done, it was time to put that uniform on.  still, we decided to wait on putting the lip color on so she could have something to eat in the car on the way. 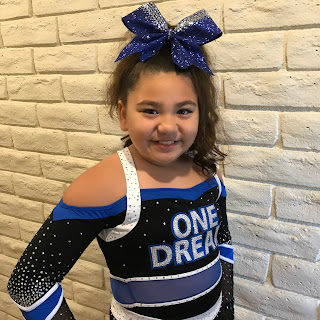 we got down to yorba linda pretty quickly, and the rest of her team was easy to find as we pulled up.  i knew this was a fairly small competition - just the right size for a first competition as a brand new team.  and as we stood in line to enter the gym, the girls headed off with their coaches to do a little warm-up and practice.  i could see that our team had a pretty big turnout, with practically every other person in the line wearing some sort of one dream paraphernalia. 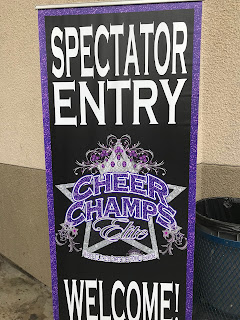 my friend had saved us some seats with a pretty good view of the mats, right behind the special chairs that were set up for coaches to sit in during their teams' performances. 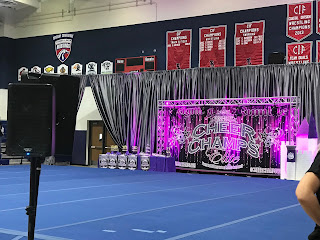 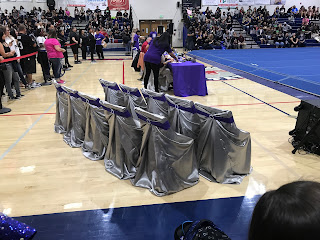 the girls got to come in and sit with us while the other teams went out and performed for the judges. 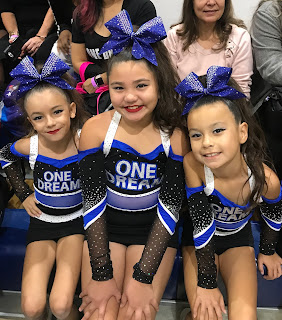 and when it was their turn to go back and warm up, the coaches texted us this picture. 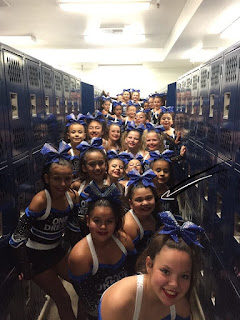 the hub arrived and i was happy to see that he'd put on the "cheer dad" shirt i'd bought for him, heh. 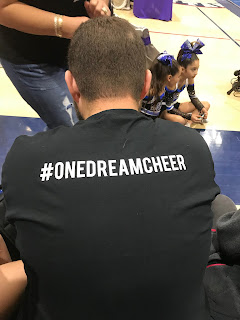 i was so convinced that i would cry when the bean took the mat with her team and performed the routine they'd been working on for so many weeks.  she was nervous and i just reminded her that she had to trust in her skills, the hard work they'd put in and her teammates to pull it all together.  she seemed okay after that, and i stood with the other parents down on the floor to watch them get to work. 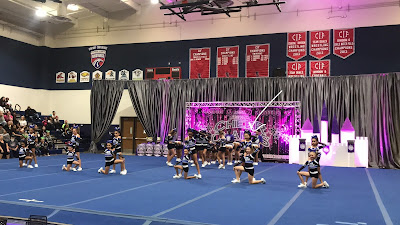 they nailed the routine, hitting all the stunts and smiling through the whole thing.  we were all so proud of them, and our humongous support squad roared with approval with every stunt. 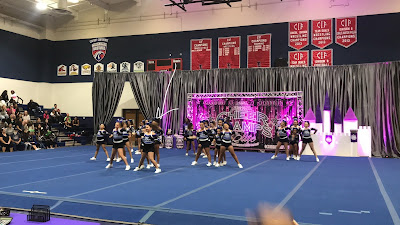 the competition was somewhat unorganized and ran about an hour behind schedule, so everyone was relieved when all the performances were done and it was finally time for awards.  i managed to catch the bean's eye with a smile as she sat down with her team to see how they'd fared. 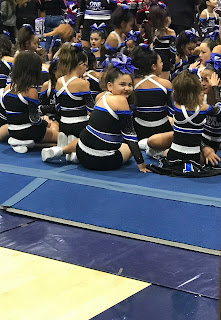 the coaches had done their research and realized that none of our teams had any other squads competing against them.  this meant that they'd basically be performing for the judges to receive their critique and evaluation, and so while everyone was excited when they received their trophy and banner we all knew it was pretty much a win by default.

we have another competition this weekend, and this one is much bigger and more important.  it's a qualifying competition that will give them a bid for the national competition in las vegas in january, so the girls have been practicing nonstop all week.  like, they had showcase on saturday, competition sunday and then they've had at least an hour and a half of practice every night since then.  they won't get a break from cheer until this sunday.