january happens to be a pretty awesome month for visiting disneyland...if you're a passholder.  but if you're buying a day pass, it's the worst - this is when the most attractions are closed for refurbishing or removing their holiday overlays.  but the weather is typically comfortable (as long as you're good with cool-ish temperatures) and the closures often keep a lot of visitors away.  january also used to be known for a half marathon weekend - starting with tinkerbell in 2012 and switching to star wars in more recent years.  but with all of the construction going on with star wars land and the new five-diamond hotel coming, all races at disneyland have been put on hold indefinitely.  sigh.

since both girls were free on monday - the old lady with her regular day off and the bean out of school for MLK day - we decided to head down for a fun disney morning.  since we'd gone straight to california adventure the last few times we went, we decided to hit up the disneyland side.  the old lady kicked on the turbo when we got inside the gates to snag us some fastpasses for space mountain while the bean and i followed at a much more leisurely pace.  as we made our way down main street, we came across the massive walls that are hiding the work being done on the old main street vehicles tracks.  apparently there are parts of the tracks that haven't been redone since the park originally opened 60 years ago, and it was time to do a little updating. 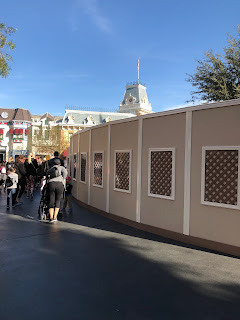 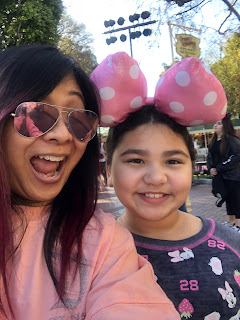 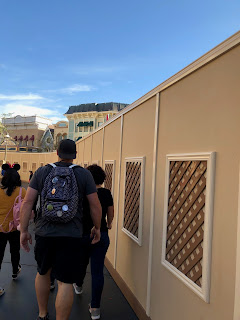 there are even walls that block the view of the castle, which kind of sucks.  if i were visiting from out of town or wasn't a frequent visitor and wanted to take some fun pictures, i'd be kind of annoyed. 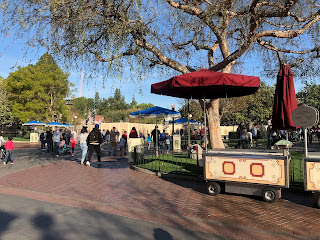 after securing those fastpasses, we decided to wait out the 30-minute line for matterhorn mountain. 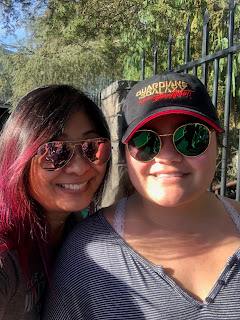 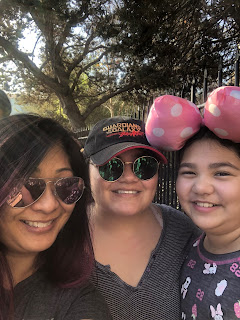 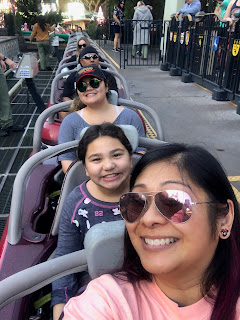 another ride we hadn't been on in awhile was indiana jones, and with the wait listed as just 25 minutes, we were happy to wait it out.  when we got inside the building, the bean decided to show off a fun feature of her new shoes: 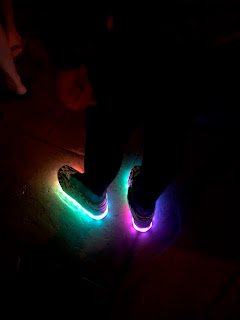 the wait time was dead on, and we were happily squealing our way through the ride in less than the quoted time. 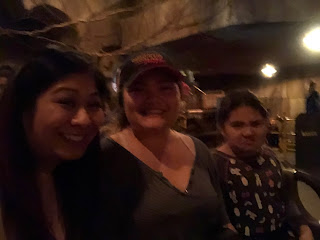 next up:  big thunder mountain. 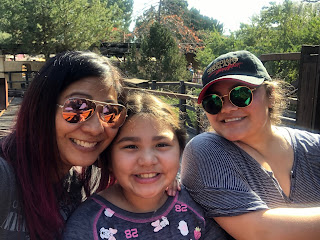 by that time, our fastpass window for space mountain was open.  the bean opted to sit with her sister, and the rumored new single rider line was confirmed as a random stranger was seated next to me. 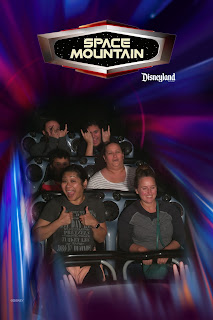 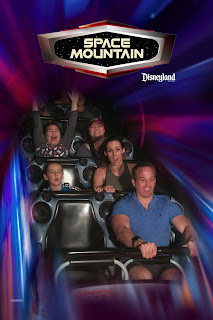 i'm not gonna lie, it was super awkward sitting that close to someone i didn't know.  i mean, this isn't a new concept to me - i've been both that single rider and seated next to one - but the other rides usually have more than one person seated in the row.  it was a little uncomfortable and although you can't tell from that picture, it really dampened my excitement throughout the ride.  oh well.

we grabbed some lunch next door at pizza port before making our way to our last ride of the day.  it was about 12:30 or so by then and we'd already ridden all of the big rides, and since the bean still had cheer practice later that afternoon we decided to leave early.  but we hadn't gotten to do "it's a small world," the holiday edition this year and it was surprisingly still open for a few more days. 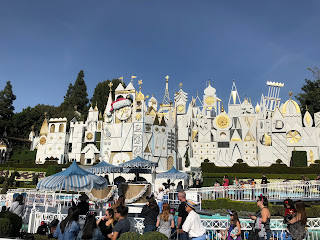 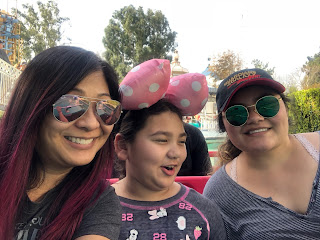 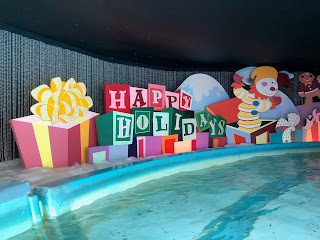 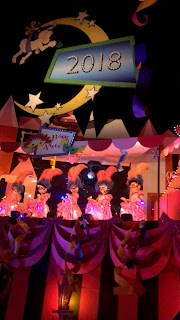 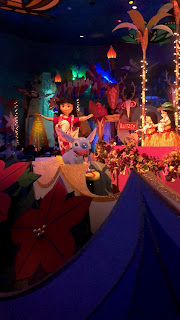 i'm no dooney & bourke fan, but i have to admit that i think this print is super cute. 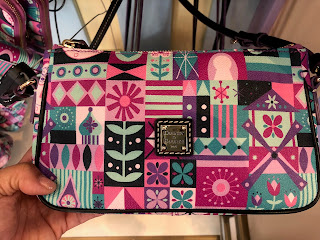 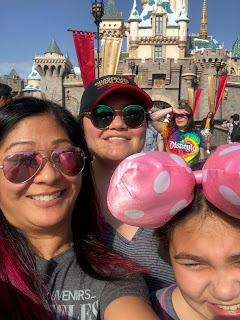 we'd promised the bean that she could grab a dole whip before we left, and we made good on our promise. 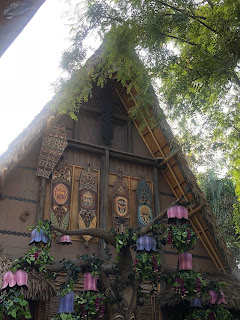 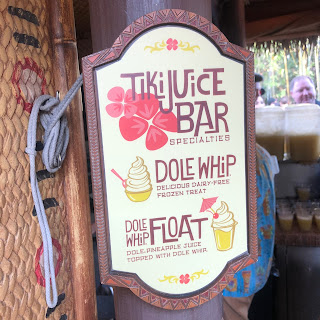 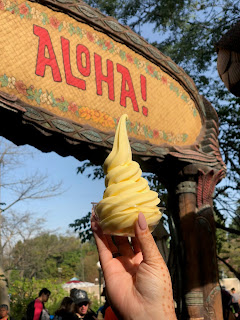 the old lady and i decided to grab a treat of our own from the candy palace on main street, and we sat down on the curb to let the bean finish her frozen treat before we boarded the tram and headed back to the car. 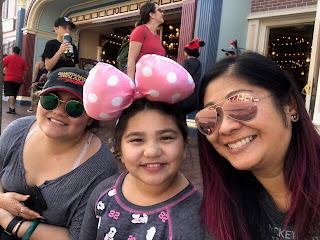 i tried to take a fun picture with my new kate spade for minnie mouse ring that the hub had given me for christmas, but i couldn't get it to turn out right no matter what i did. 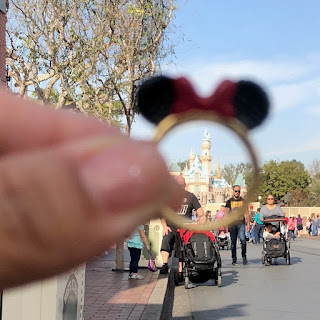 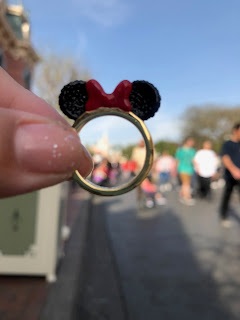 the old lady had chosen a caramel apple for her treat, while i went with one of their giant handcrafted peppermint patties dipped in dark chocolate.  these are so good. 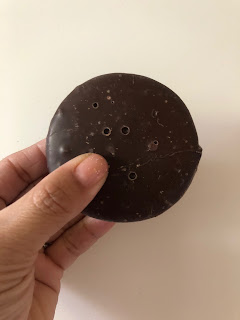 we'd only been at the park for about four hours, but it was a pretty darn good disney day.  we'd ridden everything we wanted, enjoyed a nice lunch and capped it off with some tasty treats, and still managed to get home with plenty of time for the bean to get some rest before cheer practice.  and we left just as the crowds were starting to arrive.

parent-teacher conferences are happening next week, and the bean took home a note last week from her teacher that basically said "she's doing so well that a conference isn't necessary unless you really want one."  score!  and since next friday is a no-school day for said conferences, i think maybe we'll head down to disney again for what will hopefully be a nice, easy breezy day in the parks.  we can even do all the stuff her sister doesn't like to do since it'll be just the two of us.

seems like a pretty nice reward for doing so well in school, right?
at January 18, 2018