we kicked off new year's eve day with some homemade bacon waffles.  the batter we used was so fluffy and lovely that by the time i finished making everyone's plates and got around to my own, i had just enough for this cute little mini waffle: 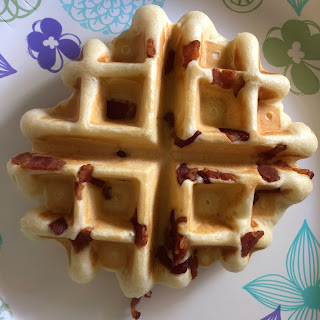 that's okay though, because that also meant that i got to use up the rest of the bacon.  heh.  and i poured myself a lovely mimosa to wash it down with: 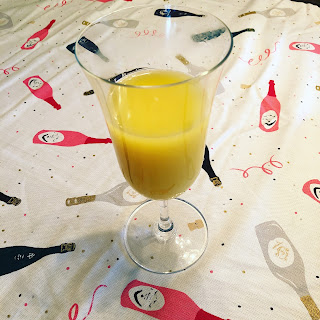 the hub had had the bright idea to have the bean invite a handful of her friend over to celebrate the new year, sleepover optional.  we gave her a limit of 5 friends to ask, but being totally last-minute we were only able to get 2 of them to come over, with just one available to spend the night.  one friend was spending the night on colorado boulevard with her family to watch the rose parade the next morning, another had a family gathering and then one girl had to drop out at the last minute.

we'd actually had a bunch of grand ideas for NYE - we'd looked at hotels, considered vegas, debated a cabin up in the mountains...and ended up staying home like we always do (which isn't a bad thing, because it's always nice to be comfy and cozy without having to deal with the craziness out in the world on new year's).  we headed to party city to pick up some decorations and fun party supplies, stopped to grab some snacks to serve and then headed back home to get the house ready for a fun evening.

i mean...someone had to test out the photobooth, right? 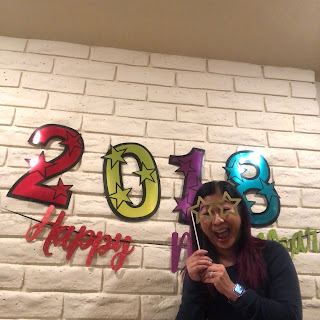 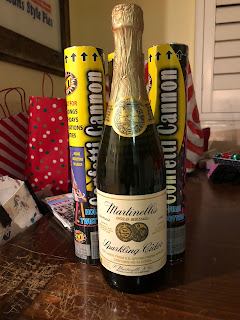 and the bean laid out her party plan on paper.  gotta love it. 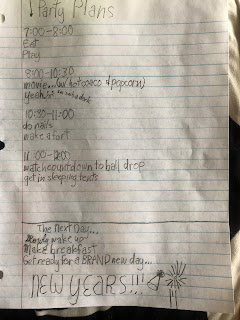 of course, when her friends arrived, all those well-thought-out plans went right out the window as they squealed with joy at being able to spend some time together doing nothing but having fun.  they hung out in the bean's room, stopped to eat some pizza and ended up playing a fun game on the floor for awhile. 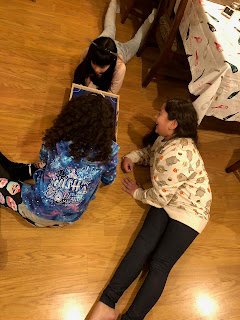 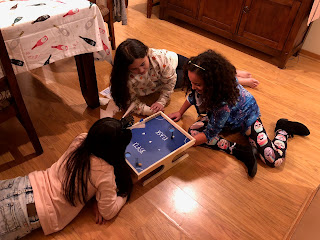 they disappeared for awhile into the bean's room, where i later discovered the hard way that they'd pulled out her slime collection.  one of the girls came out with a big ass clump of pink slime stuck in her hair, and so we spent the next 15 minutes working on getting it out.  "we can just cut it out," she said.  um, no way was i going to send anyone home with a chunk of missing hair.  luckily, a combination of ice and then warm water got it all out with minimal damage, and they went back to playing until her dad arrived to pick her up.

meanwhile, the hub and i were hanging out on the couch, drinking the most delicious hot chocolate i'd made in the instant pot and watching ryan seacrest do his best to entertain the crowds freezing out in times square. 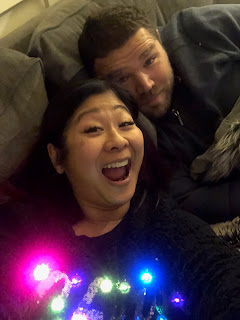 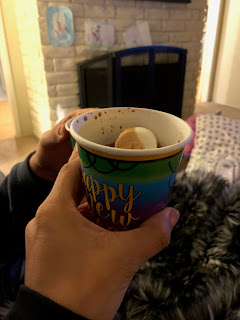 we got the bean to stop and pose for a second so we could snap our annual new year's eve photo: 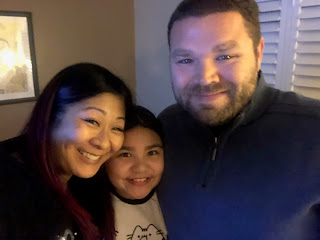 and then she and her friend picked a movie on tv and got comfy on the couch. 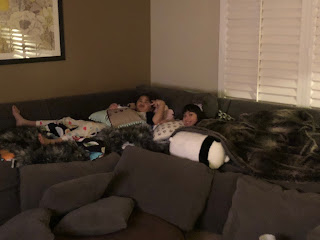 the hub and i moved to our room to keep watching seacrest, where i naturally fell asleep because comfy warm bed.  it looked like this was going to be the year that i slept right through the countdown, but luckily the girls started up with the noisemakers a few minutes early and i got up with two minutes to spare.  they'd headed outside with the hub to shoot off the confetti cannons, and i was briefly concerned about waking up all the neighbors.  but at the stroke of midnight we heard all sorts of firecrackers and fireworks shooting off all around us, and so we let them run around hooting and hollering like crazy people for a few minutes. 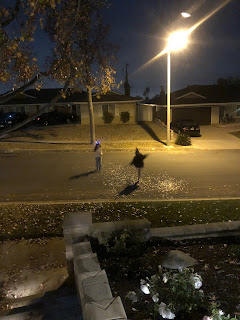 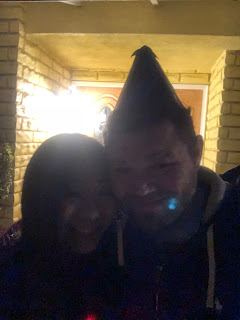 when we went back inside i saw the fort that they'd built in the living room while i snoozed happily in my bed. 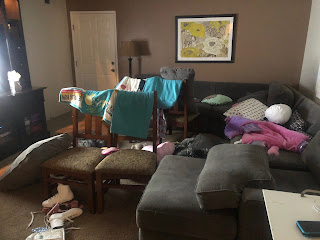 the next morning, we all got up and i decided it was the perfect morning for not just waffles, but cinnamon roll waffles. 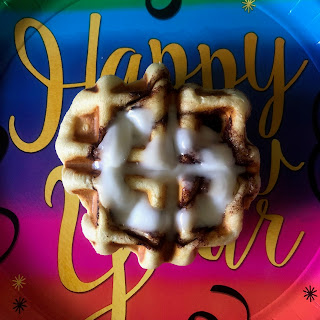 it was fun watching the hub and the old lady go at it with the new game we'd just bought.  thanks mom - this is one of two family fun board games we picked up with those target gift cards! 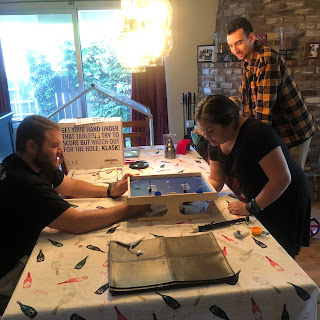 and later, when the hub headed off to check on how the lounge was doing after a couple of days away, the bean finally got to have a playdate with one of her friends while the rest of us went to the mall to do some exchanges and spend some christmas cash.  how great are these $560 christian dior sunglasses?? 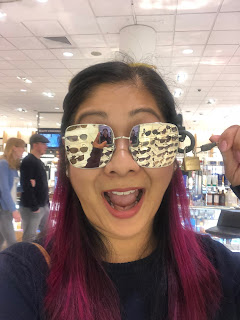 okay, not really.  i actually thought they made me look like johnny depp in the willy wonka movie, which made me laugh.  but check out these mickey jelly shoes i spied in the shoe department: 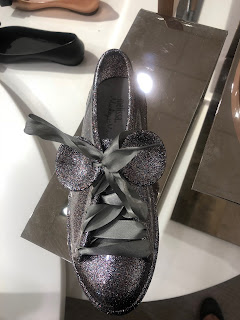 i think maybe they were playing hide and seek.  heh. 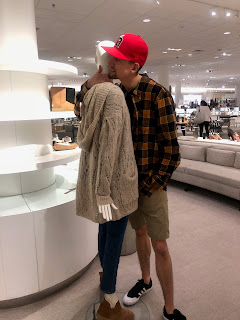 when it was time to pick up the bean from her friend's house, we took her straight over to my cousin's house to exchange presents with the kids and drop her off for a surprise sleepover.  they were all elated to see each other, and it was nice to see them all.  after grabbing some delicious mexican food to go, the old lady's special friend headed home to get some rest before going back to work the next day while the two of us headed to the local movie theater to catch a showing of "pitch perfect 3." 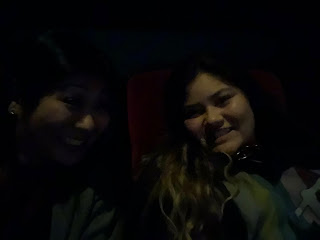 we definitely enjoyed this one more than the sequel, which had been pretty bad.  and now i've almost seen all of the christmastime releases on my list - jumanji, the greatest showman, pitch perfect 3 and the last jedi.  the old lady and i will probably go see that last one next week, when the bean goes back to school and our lives go back to normal.

it's so hard to believe that the holidays are over and we're in a brand new year.  i know i say it every year, but MAN, 2017 flew by like it was nothing.  time just moves too fast for me these days.  i just need everything to slow down a little so we can take everything in and enjoy it all.

Email ThisBlogThis!Share to TwitterShare to FacebookShare to Pinterest
Labels: going to the movies, happy new year, yay for new year