molly came into our lives on christmas eve in 2004.  the old lady and i had done a lot of hoping and wishing and dreaming about adding a maltese to our family, and while the hub was initially resistant he surprised us with her at a christmas party. 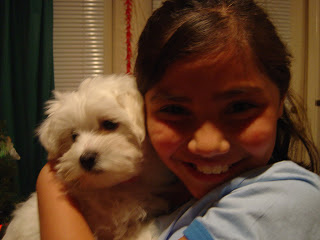 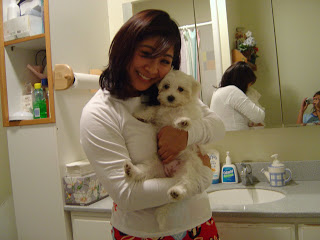 he'd met her a few weeks prior, and so while it took him a while to warm to the idea of having a dog in the house, he was her favorite because she met him first.  but who could resist this adorable little furball? 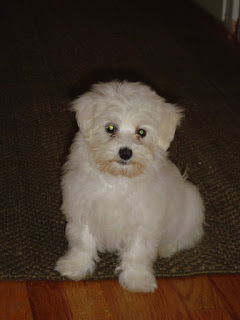 she's been a part of our family for a little more than thirteen years now.  she's seen it all, loved us unconditionally through the years, been a faithful and constantly underfoot companion to all of us.

the vet took us into one of the exam rooms to go over her test results with us, and the bean sat down and zoned out as he started talking about blood tests and lab findings and stuff that didn't seem very interesting at first.  but as the old lady and i asked him to explain the numbers that concerned him, she started listening more closely and burst into tears when the diagnosis became clear:

her kidneys are operating at roughly 40% right now, and the doctor told us that she'll probably live for a few months, maybe six.  maybe even a full year, if we're lucky.  but until then, we need to hook her up to a bag of fluids every other day that will help keep her hydrated and flush out the toxins that her kidneys aren't strong enough to clear out of her little body anymore.  she's lost about five pounds in the last year, which we'd attributed to regular morning walks at first.  we've had to change her food and had to stop giving her the treats that she loves so much.  and because none of us are able to stomach doing it ourselves, we'll be taking a trip to the vet's office every other day to have a thick needle inserted just underneath her skin to administer 150 ccs of fluids that are working as sort of a doggy dialysis.

she's been home for a few days now, and aside from the cone of shame she's sporting to keep her from gnawing at her bum, for the most part she's still her old happy self.  in fact, she's extra chipper, it seems.  she has her moments of running around and bouncing from one room to another, jumping up onto the couch in one shot instead of in several tries like we've seen her do in recent months.  i'm wondering if it's the meds she's on, or the extra fluids that she's now getting.  although we're definitely noticing that she tires quickly and spends a lot of time just laying down and resting.  i suppose it's because now we know that something is wrong, the signs are more evident to us when before we just chalked it up to old age.

poor baby.  she looks miserable, huh?  at least the cone is only on till friday. 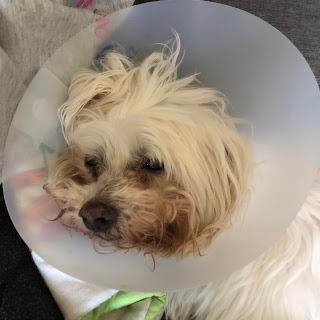 we're trying to soak up as much molly as we can now.  her diagnosis has given us more of an appreciation for having her around, and i have to admit we'd kind of taken her for granted.  i always miss her when she isn't in the house, and so i suppose we'll just have to brace ourselves for the inevitable.

Email ThisBlogThis!Share to TwitterShare to FacebookShare to Pinterest
Labels: molly's getting old, sadness