okay, so while i'm avoiding making actual new year's resolutions this year (because it just seems to always set me up for failure, and i don't like being a loser), there are a few things that i'd like to focus on this year.  one of them is doing more cooking at home and trying not to eat out so much during the week.

i haven't posted much about it lately, but the love for my instant pot still runs deep.  that thing still gets used pretty regularly, and my collection of saved recipes grows larger by the day.  and my finger may have slipped and ordered myself a nice upgraded second pot last week.  i cannot wait till it comes...it's the bigger version with a few more options available on it, like a "cake" button and the ability to make yogurt.  when i bought the first pot i hadn't really imagined that homemade yogurt would be something i'd want to do, but as time passes and i'm seeing more and more posts about how delicious and inexpensive it is, well...you know how i always suffer from FOMO.

i did manage to be fairly successful this past week with the cooking at home thing, though.  we busted out with a pan of lasagna that the hub had bought at a local italian restaurant on monday, so i guess that doesn't count since i didn't actually make it.  still, it was cheaper than eating out...that's good, right?

tuesday was a so CA-chilly, super rainy day.  the hub requested chili and cornbread, so i busted out a recipe i'd made once before that everyone seemed to like.  well, almost everyone - the bean doesn't like chili, so i got the chance to try my hand at a baked potato soup for her using some leftover potatoes i'd been trying to figure out how to get rid of.  it didn't photograph very well, but it was really tasty and she loved it.  the chili looked a little better, i suppose: 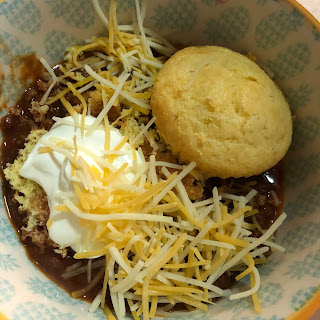 the next day, i decided to switch things up a little and bought some baby back ribs.  i'd been successful with these in the past, but hadn't made them in months.  i used a simple recipe and was able to smush two full racks of ribs in there to cook at once.  a quick brush of bbq sauce and a few minutes under a broiler to bake the sauce on (during which i also threw some asparagus in to roast), some quickie rice pilaf and dinner was served: 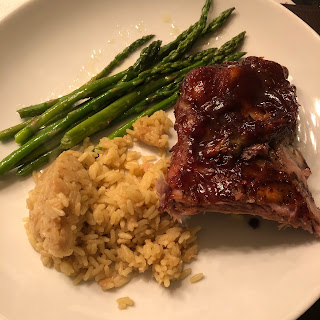 my family loves lemon chicken.  i haven't made it in quite awhile, and the recipe i usually use isn't one for the instant pot.  and i'd noticed that we finally have lemons on our tree in the backyard, so it was a good time to try a new recipe.  i liked that it incorporated some wilted baby spinach, which i knew the bean would balk at but threw it in anyway.  i served it over couscous and it was a big hit: 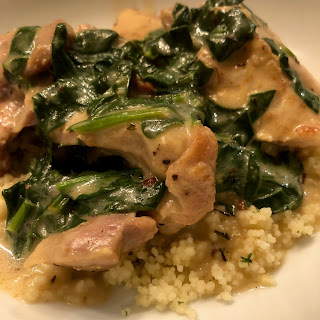 the bean loves those sous vide egg bites that they serve at starbucks.  i'd found a copycat recipe that i'd been eyeing for awhile and had even bought the silicone molds suggested to use with it, and so i finally bought the ingredients and gave it a whirl this weekend.  the molds are intended for homemade baby food: 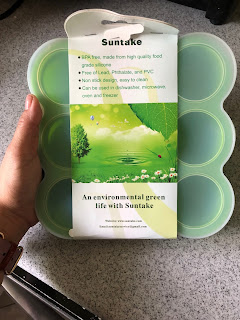 but i realized that it was too big to fit in the inner liner, so i pulled out the kitchen scissors and trimmed off one of the rows.  once i confirmed that it was good to go, i started filling it with the bacon bits i'd just cooked up in the instant pot using the saute function. 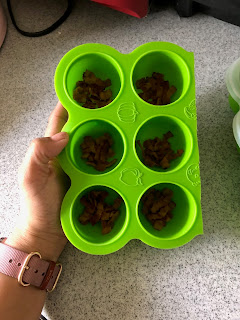 the egg batter gets blended to make it smooth, and in the vitamin it was done within seconds. 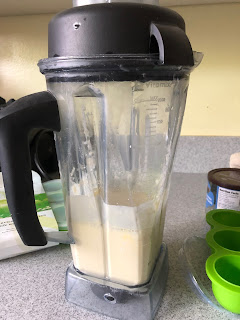 it goes in the instant pot for 8 minutes at high pressure, and then the pressure is released naturally for another 10 minutes.  when i opened the pot and took the mold out, they looked like this: 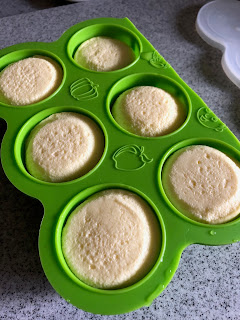 i'd read lots of people complaining about the egg bites being hard to remove, sticking to the molds, what have you. but as i flipped it over onto a plate, they slid right out and here's what i had: 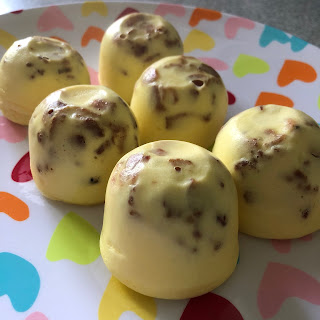 the bean and i cut into the first one, and it was super soft and fluffy and very much like the original ones at starbucks: 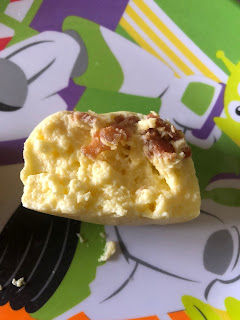 for a quickie dinner, i decided to make the bean some drumsticks using a recipe for honey garlic chicken.  i served it with some plain white rice and she gobbled it all up happily.  it's not very picturesque, but it was quite a hit. 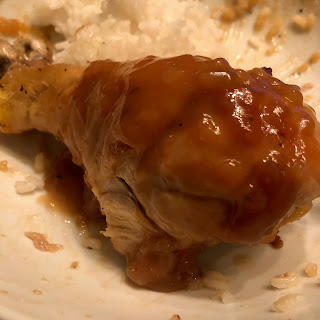 i've got a bunch more recipes saved and honestly, i posted the links for the ones i used here because i want to be able to go back to them again and not do the whole trial-and-error thing.  heh.