my mollydog is 13 years old.  she's been part of our family since before we were even officially a family, before the bean was born, she's seen so many of our ups and downs over the years.  she's a terrible guard dog, takes 20 minutes on what should be a 10-minute walk, still uses the whole house as her restroom, and is often a royal pain in the ass.  but she's our mollydog, we adore her and can't imagine life without her.

but i mean...she's 13. she still has her random bursts of energy where she runs around the house like a chicken with her head cut off, still jumps up onto the couch (although she does miss more often than she makes it), and loves her morning walks with the hub.  on the flip side, she spends a good amount of time sleeping on the couch or on her bed and we can tell that she can't see or hear as well as she used to.

and then when i picked her up from where she'd been boarded while we were in vegas last weekend, the staff told me that they noticed that she'd been gnawing on her backside and seemed to have trouble pooping.  damn.  fast forward to yesterday, when i finally got to take her to the vet.  after i explained what we were concerned about, they took a look at her and diagnosed her with an anal gland blockage - a fairly common issue, but would require anesthesia to fix properly.  and to go along with that, she had some dental issues that also needed to be taken care of, and so i approved all of the work to be done at the same time so that she'd only need to be put under once.

except that after they ran some tests to make sure that she was healthy enough to handle the anesthesia, they found some issues with her kidneys.  and also that she was anemic.  shit.  so then i had to let them keep her in the hospital for 24 hours so they could hook her up to an IV to get some fluids through her and then re-run the tests to see if her numbers improved.  i asked the doctor what the diagnosis could possibly be and he basically said it could be as simple as an infection that could be treated with meds, or it could be cancer or possibly kidney failure.

man...this sucks.  we won't know what's wrong with her until later this afternoon.  and of course, my mind has already taken me from rolling my eyes at having to watch her shuffle around the house wearing the cone of shame to the unhappy place of learning how to live without her.  i can't walk past her bed without crying, my eyes are so sore, and i've already had to use the old "oh, one of my eyelashes fell in my eye" line with the bean.  because of course, i don't want her to be worried or sad unless we actually know there's something to be worried or sad about.

i took this while we were waiting for the doctor to come in and check her out. 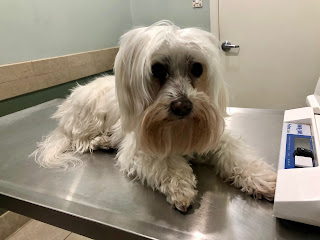 and before i left, when i thought she was just having her blockage fixed and her teeth taken care of, i got to hug her and tell her i loved her.

please keep my adorable, old lady pain in the ass doggy in your thoughts today.
at January 25, 2018

Email ThisBlogThis!Share to TwitterShare to FacebookShare to Pinterest
Labels: molly's getting old