the girls and i were super stoked when the annual two-week blackout period on our disneyland passes finally ended.  the bean was still on christmas break, but with her cheer practices and the old lady's work schedule, it wasn't until thursday that we were finally able to head out. 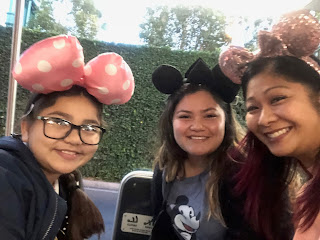 our goal was to hit up the california adventure side, for two reasons - to take some last photos of the paradise pier area before it closed down for its transformation to a pixar-themed area and to use up the sip & savor pass we'd bought at the beginning of the holiday season for the festival of holiday food kiosks.  they're no good once the holiday season is over, so we wanted to make sure we took advantage of them while we could.

it was already pretty dark by the time we made our way into the park, so all of our final pier pictures look like this: 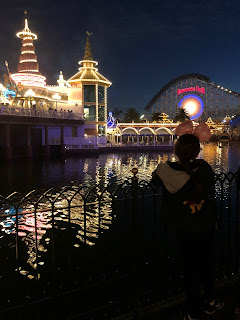 i just kept taking pictures of everything i figured was either going away or getting re-themed. 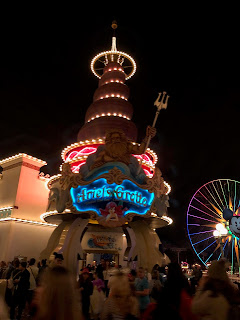 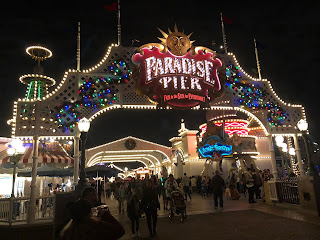 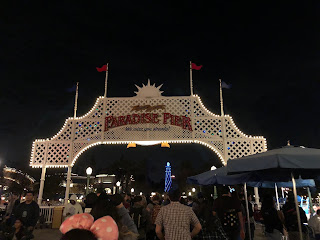 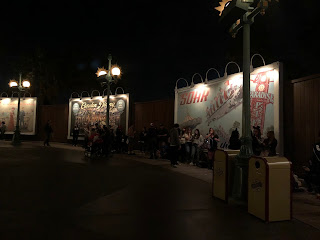 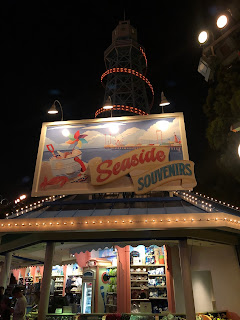 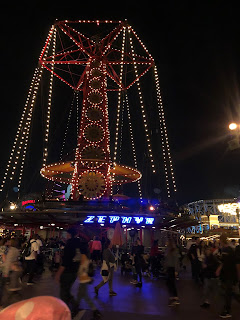 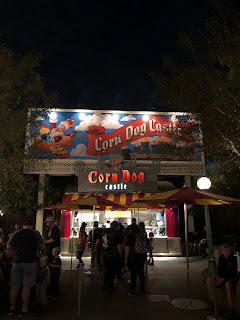 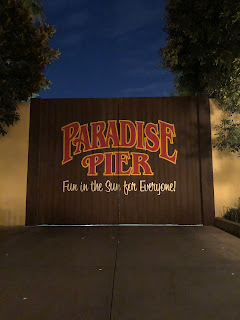 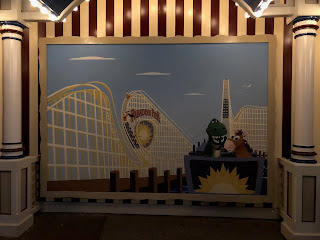 as much as i totally get the whole "disneyland will never be completed, it will continue to grow as long as there is imagination in the world," i have to admit that i really loved all of the california-themed details in this park.  i miss the golden gate bridge at the entrance, the giant letters that spelled out "california" out front, the train cars that housed an ice cream parlor and souvenir shops, the super kitschy beachy decorations...one day i should bust out my old photo CDs and share some of the pictures we took back when california adventure first opened.

we made our way back towards the very rear of the park, where the midway games and old-timey themed shops were. 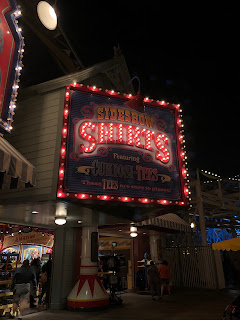 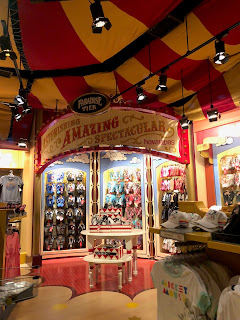 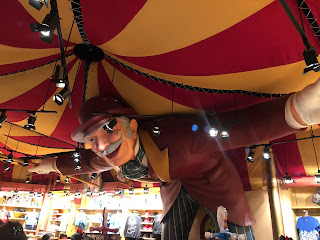 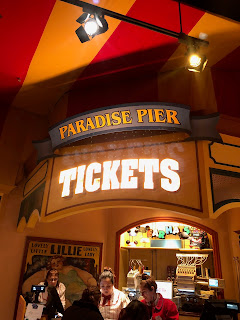 the california screamin' ride is one of the original attractions from when the park first opened, and while the ride itself will remain the same, it's being re-themed with characters from "the incredibles." the bean actually just finally rode this coaster for the first time a couple of months ago, and we stood there and listened to neil patrick harris' voice do the countdown at the beginning of the ride. 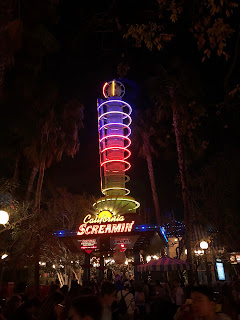 goodbye, paradise pier!  thanks for the memories! 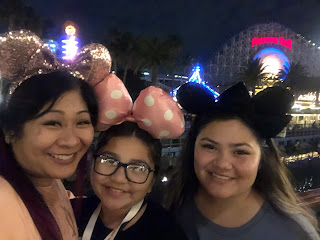 then it was time to get our grub on.  we visited the AP corner, where they were selling some exclusive merchandise and had plenty of tables and chairs to hang out at and charging stations to keep your devices juiced up. 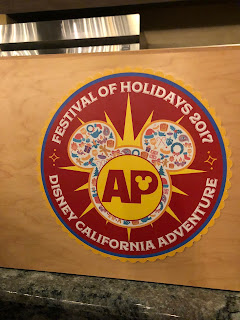 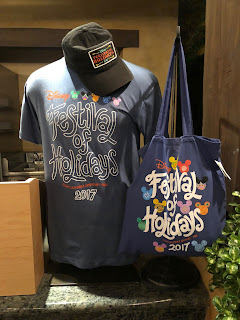 we had eight little tickets to redeem at the kiosks, and the bean chose the mac & cheese with cornbread crumbles, seared salmon filet with potatoes and lemon caper sauce and the warm chocolate float with whipped cream and brownie crumbles: 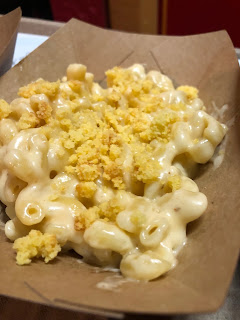 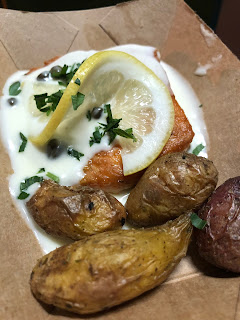 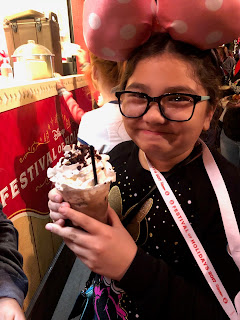 i opted for the chilled crab salad served with warm polenta and the beef short rib with mashed potatoes and gravy. 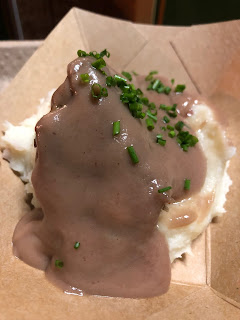 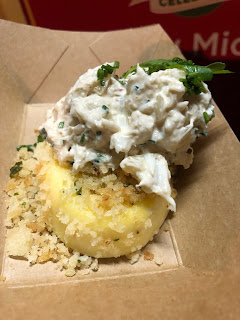 the old lady's picks were the reuben potato smash with russian dressing and rye toast crumbles (they were really into crumbling stuff onto everything this year), nashville fried hot turkey with housemade dill pickles and cookie butter & jelly cheesecake tarts. 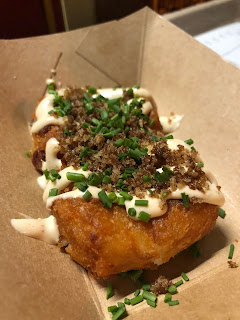 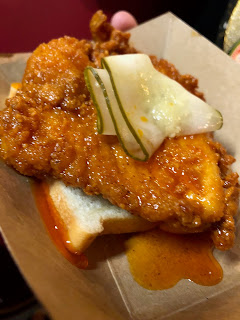 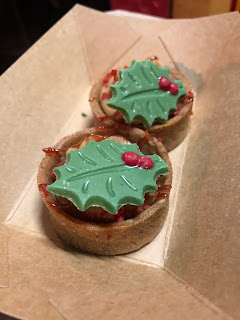 the perfect storm - final days of the holidays and paradise pier and annual passholders finally allowed access again - created some pretty huge crowds that whole week.  and so after we were all done eating and browsing through some shops, we took one last look at the giant christmas tree: 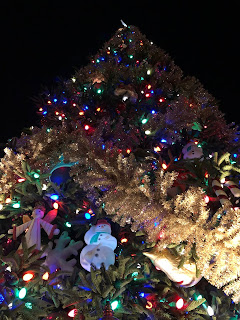 and that was that.  i hear that the walls area already up around the pier areas that are being remodeled,  all of the holiday decorations are slowly but surely disappearing, and the crowds are mostly gone.  it's actually a really good time to visit the resort now, with so many attractions closed for refurbishment and all the kids back in school.  it even rained today, which i bet made for a really nice day at the 'land.

Email ThisBlogThis!Share to TwitterShare to FacebookShare to Pinterest
Labels: california adventure, the holidays are truly over