yay, i managed to get through another week of making most dinners at home last week!  i used the instant pot for most of it again, which makes life so much easier for me especially when we get home late from cheer practice.  and check it out - my second pot was delivered and now i have two! 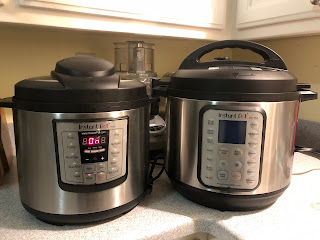 on monday, i decided to use up some stew meat i'd bought for a batch of amish beef & noodles, but i added some green beans so there'd be a veggie in there: 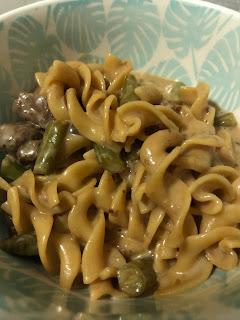 i was really going to try to avoid making too many meals that include pasta - you know, trying to cut carbs but not succeeding even a little bit - but i'd been wanting to try a recipe for tuscan chicken pasta and had finally remembered to buy all of the ingredients i needed.  and this one was a big hit with everyone: 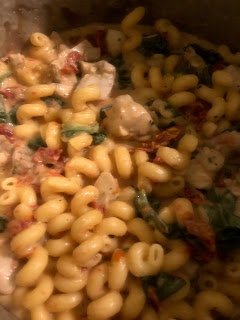 another recipe i'd been holding onto for awhile was for a simple italian-style soup with ground beef, tomatoes and teeny-tiny acini de pepe pasta.  we ate this with a loaf of fresh french bread i picked up at the grocery store, and while the bean grumbled about the chunks of tomatoes i'm still calling it a winner. 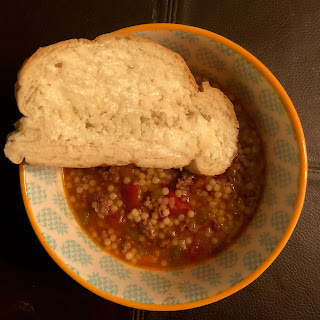 so i'd ordered a cute little angel food pan from amazon to use for a quickie cake recipe i found on the instant pot facebook page.  i really do try to make most things from scratch as much as i can, but i'm still a little traumatized over the one and only time i ever made angel food cake from scratch when i was like 11 or something.  the recipe called for something like 10 egg whites, and i remember getting in trouble because i'd used up almost a whole dozen eggs and had all those yolks left over.  oops.  anyway, it was super easy - you just combine the mix with some water, mix it on high for a few minutes until it's super fluffy and meringue-like and spread it into the pan. 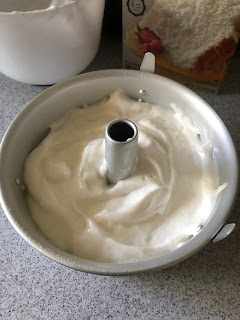 one thing i dislike about the instant pot is that the smell of the last thing you cooked in it is damn near impossible to get out of the rubber sealing ring in the lid.  the easiest solution is to buy extra rings and  use one for savory dishes and another for desserts.  the angel food cake was the first dessert i was making in the ol' pot, which gave me the best excuse to finally bust out the "sweet" ring: 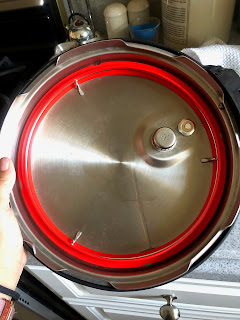 now because the pot essentially uses steam to cook everything, the cake looked a little weird when it was done: 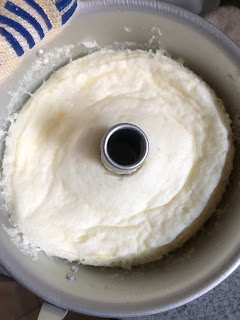 no biggie.  i flipped it upside-down to let it cool completely: 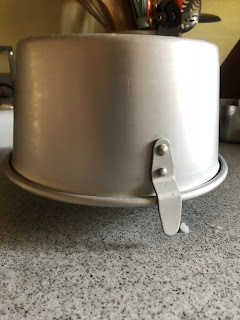 and then it came out easily (and in one piece, yay!). 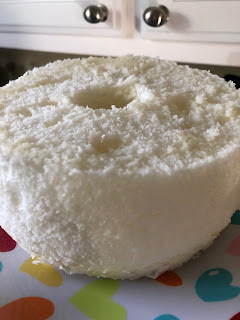 it was fluffy and lightly sweet and to my surprise, even the hub really liked it.  he's not usually a fan of meringue-y, whipped cream-y type things, so i thought for sure he was going to turn his nose up at this.  he suggested maybe doing a little lemon glaze for it next time, and so it looks like this cake might end up going in the regular rotation. 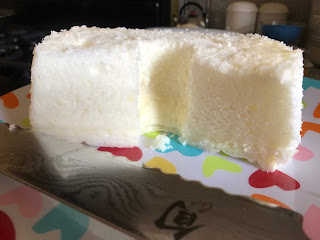 i'm on the hunt now for more fun recipes to try this week, especially since i now have a whole new instant pot to break in.  i can do the main dish in one and some sort of a side in the other one, or another dessert at the same time.