a bunch of 10-year-old lushes

the first birthday party of the season was a really fun one, in a place i had no idea even did parties.  one of the bean's BFFs turned 11 and celebrated it in one of the most tween-y ways possible...by gathering all of her closest friends for some organic, fragrant fun at lush. 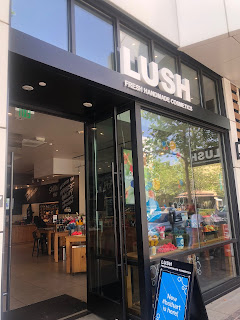 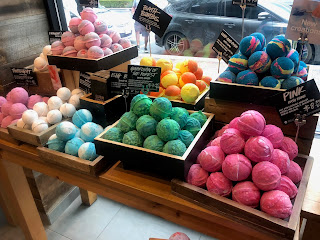 i snagged this group shot of the girls who were the first to arrive: 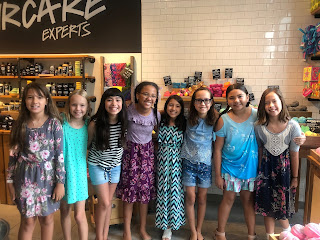 and they roamed around the shop that they had all to themselves, free to sample anything that had a tester while giggling and smearing all sorts of stuff on their skin. 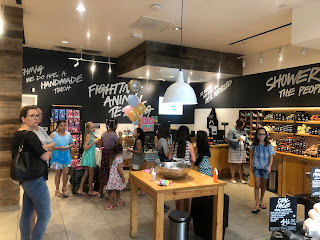 once everyone had arrived, the staff got the party started by gathering the girls at the front of the store, where they'd set up a couple of giant buckets of water to drop bath bombs in and test out their new line of bubble brushes and bubble wands.  this, as you can imagine, was a huge hit. 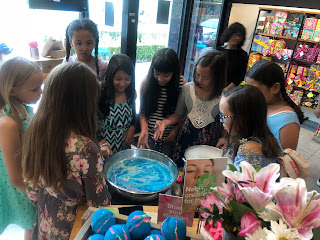 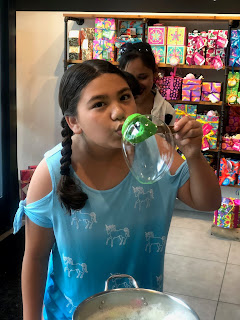 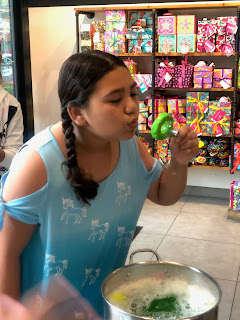 then they moved to another table to play a variation of charades, where they were handed chunks of "fun" - a multipurpose product that can be used as soap, shampoo, bubble bath, and best of all...molding shapes out of it like play-doh. 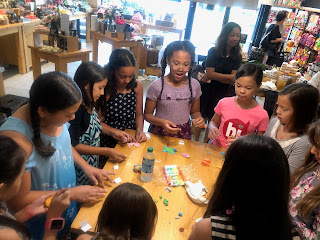 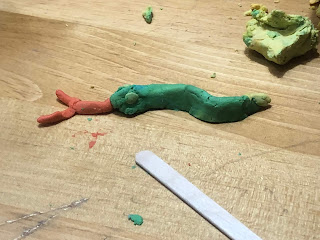 after that it was "face painting" time...which meant that they got to paint each other with all kinds of face masks before cleaning it all off with wet towels. 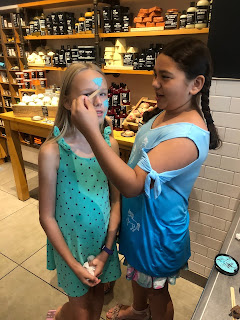 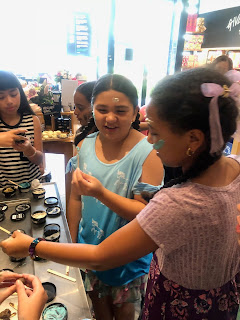 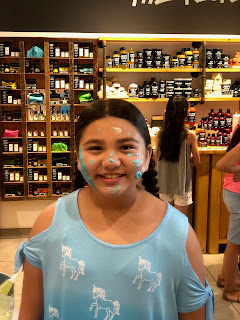 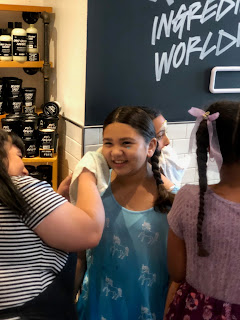 one of the moms was roaming around with an instant camera, collecting the prints on a table so that the girls could sign them before placing them in a photo book. 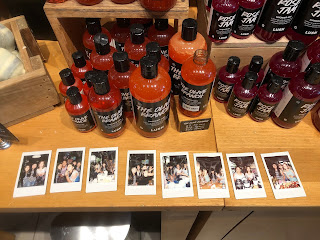 oh, and there was a table of tasty breakfast treats - muffins, cronuts, fruit and cheese, juice and tea and water. 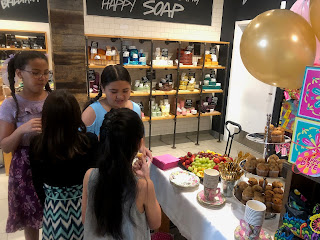 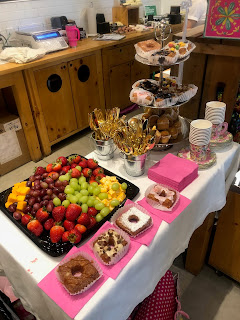 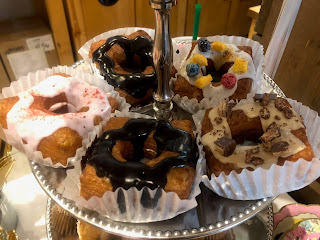 the last hands-on activity the girls got to do was probably the best one - making bath bombs to take home as a party favor.  i'm not sure why i was getting the stink eye from the bean here, but there you go. 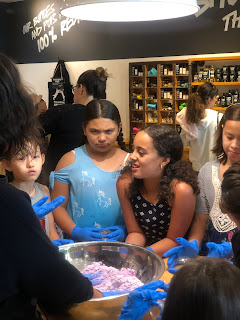 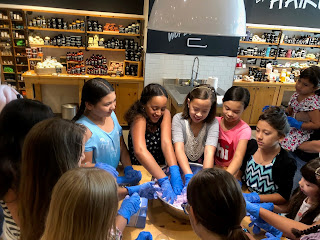 once that was done, each girl was handed a gift card to do some shopping.  i figured they'd get to pick a couple of things out for, like, $20...so i was pretty surprised when the bean pulled hers out and showed me that they each had $50 to spend in the store.  wowee! 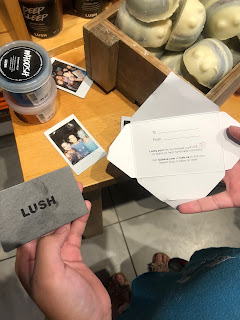 they all had a blast browsing and debating and putting things in their baskets, while the other moms and i smirked at the sneaky math lesson that the shopping trip managed to squeeze in.

all that was left after that was to sing to the birthday girl, munch on cupcakes and take one more group photo with the whole party. 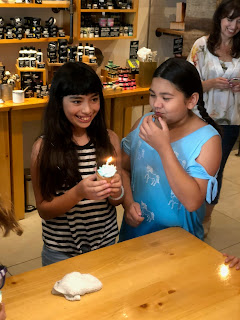 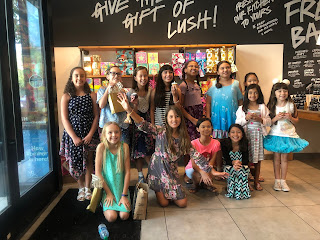 after we said our goodbyes, a few of us lingered and decided to walk around the mall a little. 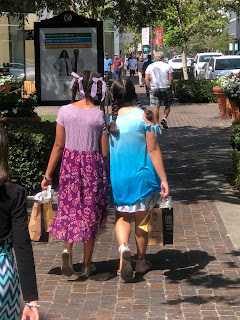 we stopped in a couple of shops that the girls wanted to look around in, and ended up here: 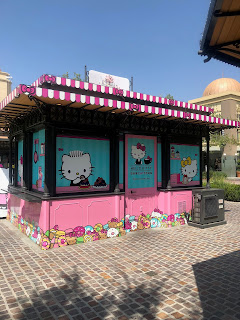 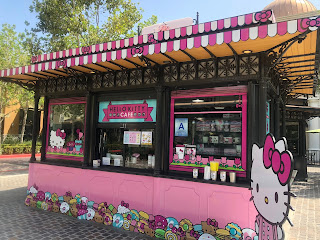 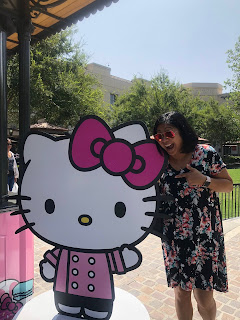 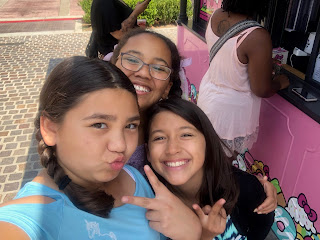 i can't be at the hello kitty cafe without picking up one of their pocket pies, especially when the featured flavor is lemon. 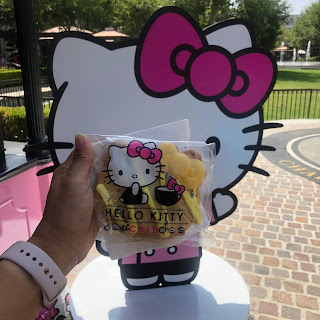 it was a fun morning, and a great way to kick off birthday party season 2018.  now we're brainstorming like mad to come up with something for the bean, who has informed us that she plans to have a birthday party every year forever.

Email ThisBlogThis!Share to TwitterShare to FacebookShare to Pinterest
Labels: bath products good enough to eat, the bean is a party animal