it's time for party planning again!

with the old lady and her special friend still in hawaii celebrating their 4th anniversary (and their first vacation together in a couple of years), there hasn't been a ton to report on from around here.  the bean is plugging away at school and cheer and music and everything else, and had her first meeting with her new girl scout troop this week.  molly dog is still hanging in there, still getting her doggy dialysis every other day and feisty and funny in spurts.  i remember when we first got her diagnosis (in january!  how has it already been so long?), all i could think of was "please let her make it to at least one more birthday."  and with that day coming tomorrow, i just keep praying that she stays with us for one more christmas.  honestly, from looking at her and watching her scamper around you would just never know that anything was wrong.

it's funny, we always joke that we have three birthdays in september:  molly on the 14th, nick jonas on the 16th and me on the 18th.  ha!  such nerds.  and then two weeks later, the bean celebrates her birthday too.  i, of course, still adore my own birthday and still love to celebrate it as much as i can get away with, but i find myself focusing more on figuring out what kind of party the bean will have.  i was really hoping we could maybe talk her into doing something low-key this year, since she's getting older and the ideas for parties that are somewhat unique are getting harder and harder to find.  but when i brought up to her that that's what a couple of her friends were likely going to do this year, i got a startled look and a "oh no, i'm going to have a birthday party EVERY YEAR FOREVER."

so i tried to talk her into doing a party at a local tea parlor that i know she likes.  and while i got really close to getting the green light from her on it, two things came to mind:  1.  one of her besties was already eyeing that for her own celebration (a week later), and 2.  she wanted to be able to invite boys.  now, of course, she could definitely invite them, no problem.  but knowing these boys, there's no way they would actually attend.  heh.  we've done some brainstorming over the last few days though, and i think we've come up with some pretty great ideas that are going to be really fun.  stay tuned.

in the meantime, i've been cranking out more fun stuff on the ol' embroidery machine that's gotten so much love in the last month it probably doesn't know what to do with itself.  i'm having so much fun with it though, and i'm starting to stockpile some items in anticipation of hopefully buying a vendor table at a school event in december.  we'll see.

this i made for my lash lady, who loved it so much she's going to sell some in the shop: 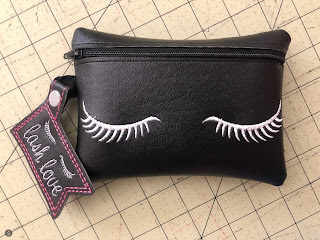 i tried my hand at making an essential oil rollerball holder, and maybe i can add these to the list for my vendor table: 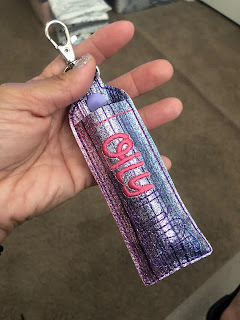 i think the text is kind of stupid and cheesy though, so if i do those i'll likely just leave it off and let the pretty vinyl sell itself.

this is super fun too: 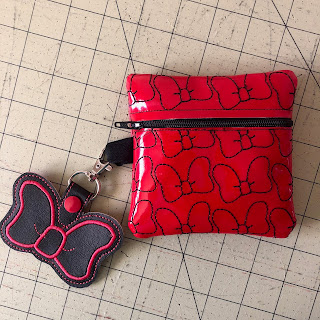 and because the cheer backpacks this year don't have names embroidered on them, i started making these little tags.  this one is for the bean's longtime friend: 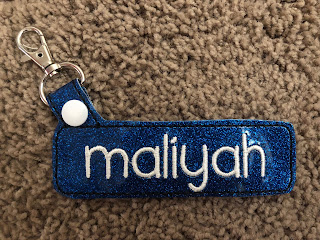 it hangs nicely off of one of the zipper pulls, and it'll make identifying everyone's bags easier during competitions and stuff.

this one was my first fail.  and it turns out that i was using a needle that was way too big for a project using this many layers and stitches.  i was so mad when i finished it and went to turn it right side out and felt it tearing apart... 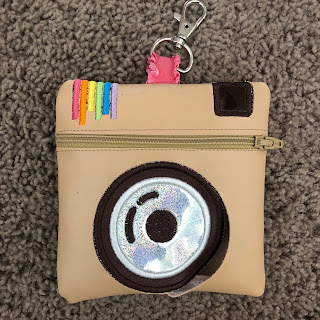 bummer, too, because how cute is that??  it's okay.  i bought new needles and i'll give it another try and hopefully i'll be successful the next time.

there are lots more designs i want to try out, too.  good thing i just stocked up on vinyl in all sorts of fun colors.  birthday and halloween and thanksgiving and christmas...the holidays are gonna be all embroidered up this year!
at September 13, 2018