the hub's 40th birthday extravaganza unofficially kicked off on friday, when he and i headed out to pick up something that would have him checking off another bucket list item.  one of the guys who's a regular at the lounge does exotic car rental, and the hub had arranged for the use of one of them for our celebratory weekend out on the west side.  we grabbed some delicious lunch together first and then pulled up at the guy's shop...where the hub was a bit alarmed and slightly dismayed to find that the lamborghini he'd rented had recently undergone one of those car wrap things that took it from white to...this. 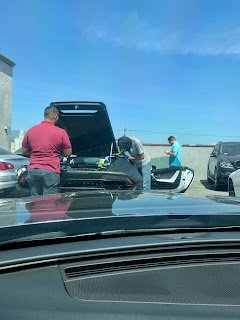 okay, you can't really see it too well from that picture, but here's a better shot: 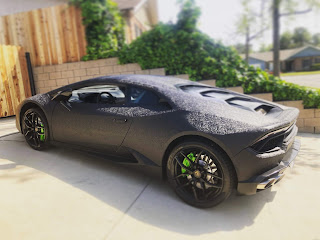 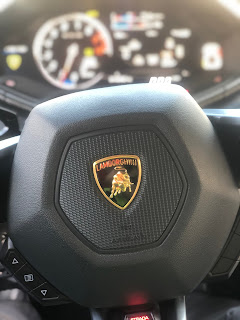 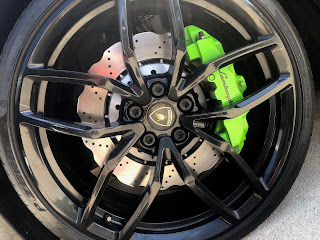 it looked like some sort of camo-floral hybrid, which wasn't exactly the look he was going for.  but he sucked it up and got behind the wheel and had fun driving it home.  when i got home from picking up the bean, she was super excited to jump into the passenger seat and have her daddy take her for a ride. 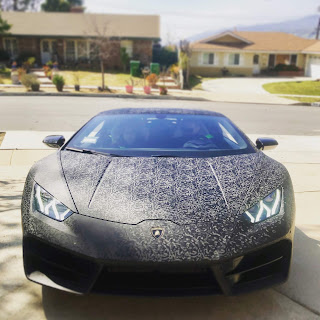 a little while later, he headed off to put in some hours at the lounge while the bean and i were joined by the old lady and her special friend to grab some dinner and then finally crack open my friends-themed monopoly for game night. 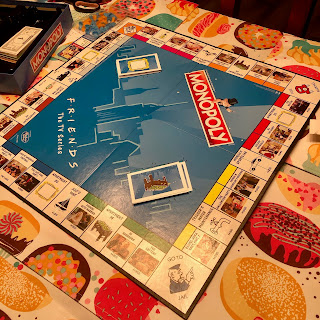 there are tokens to represent each of the six main characters - a chef's hat for monica, a designer handbag for rachel, guitar for phoebe, dinosaur for ross, sweater vest for chandler and pizza for joey. 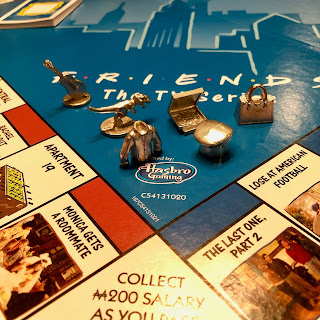 we had fun playing, examining every game piece and card and giggling at all of the "friends" references.  in the end i bankrupted the bean first ("while we're playing monopoly, i'm not your mother"), who was less than thrilled to lose the game. 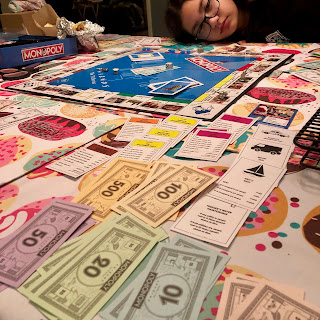 just like regular monopoly, it was a several-hours-long game.  and i'd put off a dozen cookies that i needed to decorate for delivery the following day.  it was well after 10:00 by the time we finally packed up the game and i got started on frosting those bad boys.  luckily it was a pretty simple design - just a name and a contrasting outline.

and the ONE time i relied on my memory and didn't check and double-check and triple-check the spelling of the name...i got it wrong.  i realized it when i was about halfway through.  GAH.  i panicked and my first instinct was to scrape off the letter i'd incorrectly frosted. 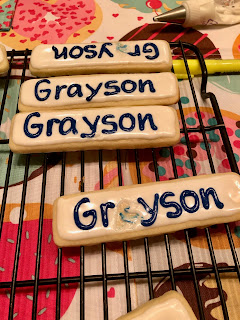 i made some fresh white frosting and piped in a dollop to cover the hole i'd created and hoped for the best.  i continued with the other half dozen, this time spelling the name correctly, as i waited for my fix to dry enough to work with.  looking back, i probably should have just scraped off the whole thing and started over, but it was late and my brain was fried and i just did what came to mind first. 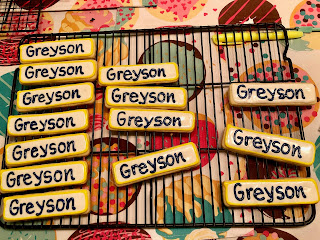 see?  from here you can barely tell that i'd screwed up so royally.  well, except for that top one on the third row.  that one ended up getting trashed.

after letting them dry overnight, my quick fix had settled in pretty nicely and i knew that once they were wrapped and tied with the blue ribbon, no one would even notice the gaffe. 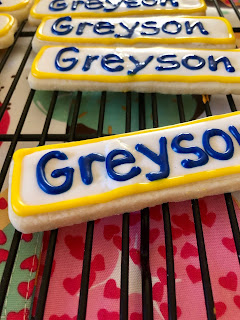 but i learned a couple of lessons the hard way - 1. always, ALWAYS check and double-check the spelling of all names and 2.  don't put off cookies until super late at night even if it is only a dozen.