while other schools in our area had their break weeks ago, ours was delayed because of how late easter is this year.  makes sense since it's a christian school, right?  and yesterday the kids put on a performance for us that was a reading of an essay they'd written from the perspective of someone who was around during the time of jesus.  the teachers asked for them to come to school dressed in a toga or tunic for the occasion, and i was amused at the notion of a toga party to celebrate easter.

of course, i had at least a couple of weeks to prepare for this and didn't actually get anything together until literally 6am yesterday morning.  oops.  i knew there were probably some who were expecting us to show up in some sort of fantastic handmade sewn creation, so i was snickering a bit as i sat in the sewing room looking at a white flat sheet and googling "how to tie a toga."  the bean dragged herself into the room a little while later, and after perusing a few different sites plus a couple of youtube videos, we got to work.

it ended up being a lot easier than i'd thought, and then we got to work on a half up/half down hairstyle with curls and a sparkly decorative piece to dress her up a little.  we added a rope belt and one of my old stella & necklaces and called it a day. 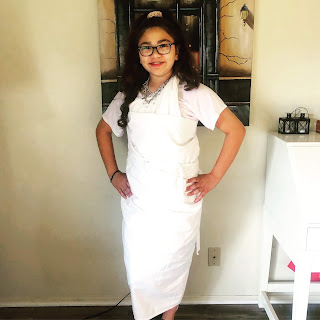 when we got to school, we headed into her classroom where a few of her fellow classmates were hanging out with the teachers, checking out each others' ensembles and chatting about what they were going to be doing for spring break.  there was quite a variety of outfits there, in different colors and all levels of effort ranging from full-on toga costumes to simple belted t-shirts.  my co-room parent and i were tasked with the duty of heading up to the music room where the kids would break up into groups and read their pieces, making sure that the parents who arrived didn't disturb the arrangement of chairs in the room.  the junior high kids occupy the upper floor where the music room is, and they were finishing up their annual testing so we had to make sure that parents didn't loiter in the hall and distract the students.

the bean seemed a little nervous about reading her essay in front of her group, but was excited when she walked in the room and saw both me and her dad waiting there for her.  she loves when i do stuff like this: 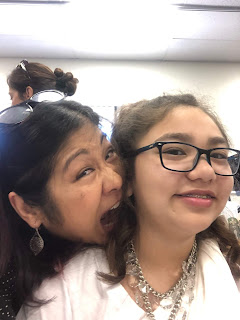 the kids were split up into several groups, and then each kid took a turn standing up in front of their group to read their easter perspective essays.  it went pretty quickly, and while the bean whispered to me that she was nervous she did a perfectly fine job. 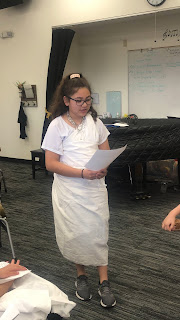 then we had time to take pictures of the kids before they headed back downstairs to their classrooms and get the rest of their schoolday going.  i had to tease her BFF's mom for sending her kid to the toga party dressed like the statue of liberty: 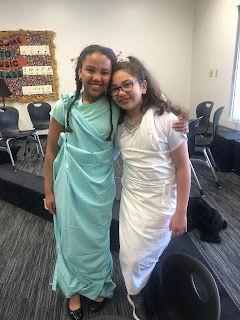 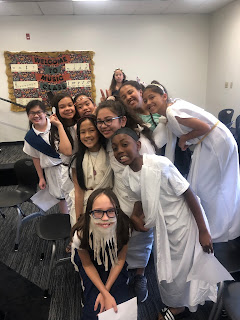 and then after they all got downstairs and changed back into their uniforms they got to have a donut that my co-room parent had brought in.  the bottles of water i brought in weren't quite as popular, but that's okay.  of course she went for the ultra giant chocolate donut: 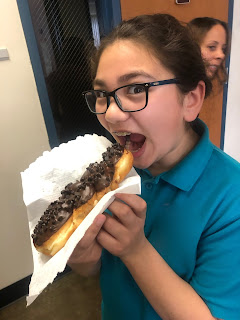 the old lady and her special friend are heading to coachella for the second weekend of the music festival.  they were planning on boarding stevie for the weekend, but the hub said that was silly and we decided to babysit him ourselves.  he's a stage 5 clinger and cries when his parents aren't in view, so it's going to be interesting.

as soon as they made their exit he jumped up onto the couch and watched and listened for them, crying the whole time.  poor baby. 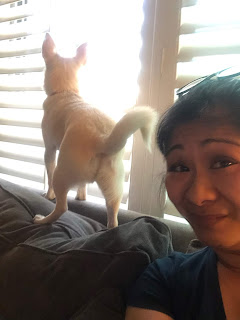 after awhile he finally calmed down and relaxed.  he kept a close watch on the door, but he eventually decided to just lay down and chill. 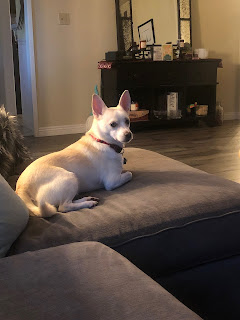 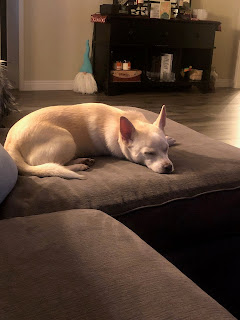