no club for you!

so for our night out in west hollywood, we'd originally planned on having dinner at la descarga and staying for the show, dancing and drinking.  i had a reservation all set weeks in advance, and the old lady and i had spent considerable time looking for suitable attire that followed the dress code laid out on their website.  we were pretty excited, since going out to a club definitely isn't the norm for us.

and then about a week or so before the big night, i received an email that basically said "sorry, we won't be open to the public until 10:15 that night after all because of a large party."  well, damn.  i tried to reach someone to see if we would still be accommodated for a table, and after a couple of tries i finally heard back.  sure, we could still have a table...if we guaranteed two bottles for a mere $300 each.  hard pass.

our other idea - to hang out at bar marmont at the hotel - also wasn't going to work as the bar is closed for remodeling.  ugh.

and so the hub decided to make a reservation at gwen, a cool-sounding restaurant a quick uber ride away.  i checked with my friend weezermonkey to see if she'd been and if it was a place she'd recommend.  luckily the answer to both questions was yes, and so that ended up being plan B.

i had a couple of options for my outfit after all, and i ended up wearing a dress i'd bought online that arrived just the day before.  our very vintage hotel room didn't have a single full-length mirror in it, so the only photo i managed to get is terribly dark.  trust me, the dress is super cute and you've probably seen it via a sponsored post on instagram or facebook. 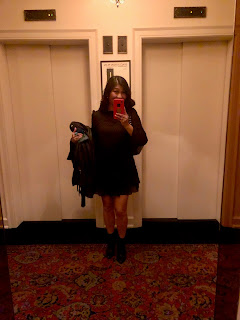 when we got to the restaurant, we had enough time to order a drink before being seated at our table.  this was the old lady's special friend's tom collins, served in a super cute retro glass. 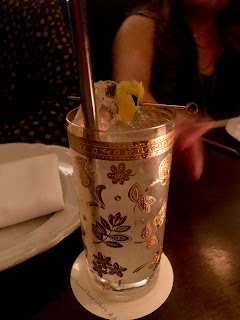 she and i each had this delightfully fruity "over the rainbow."  it tasted like a handful of skittles. 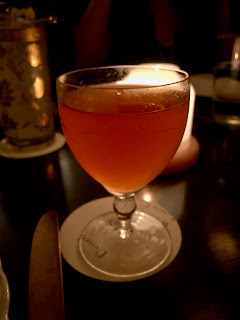 our table was next to the giant meat locker - and this was the only photo i took of the scenery. 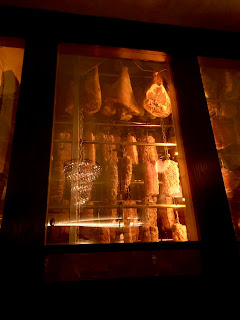 this is also the only picture i got of the two of us that night. 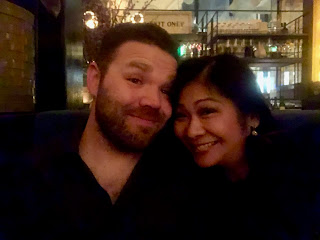 we perused the menu and decided that we couldn't really decide for ourselves, but michael, our friendly and fantastic server, was more than happy to make all of our selections for us.  he started us off with the cured fluke, served with papaya salad, peanuts and a green curry sauce. 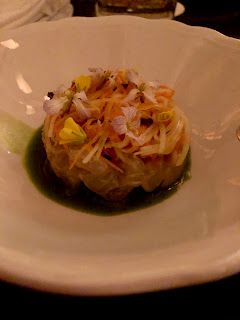 this was a wagyu beef tartare that was meant to be eaten inside the leaves, like a taco.  super tasty. 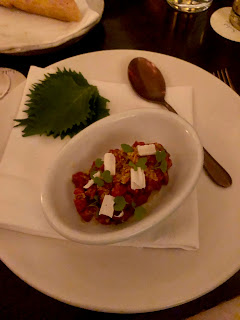 more wagyu beef, sliced thin and seasoned perfectly.  this was probably my favorite part of the meal. 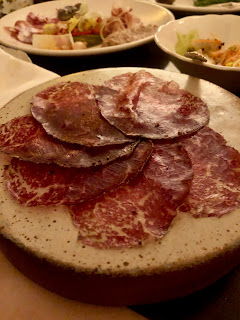 housemade charcuterie.  you know we can't ever pass up a good plate o'meat. 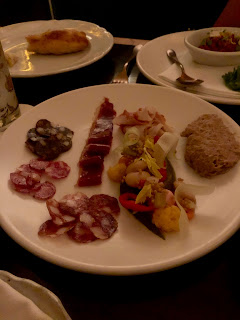 and because we're old folks, we were definitely in need of a pick-me-up at this point.  it was probably somewhere around 9:00 and we were only halfway through our meal, and so we all had shots of super strong espresso. 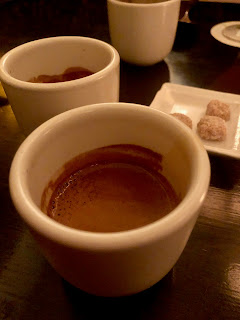 this was an off-menu item that i could have eaten all night long.  the pasta had porcini mushrooms in the dough, and the sauce was so delicious.  i tried to leave enough for everyone else, but it was hard because i just wanted to eat it all. 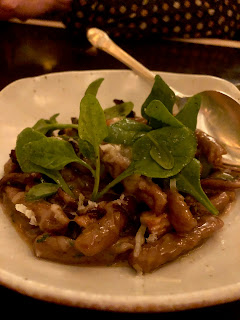 the pappardelle pasta was topped with a rich meat sauce and practically melted in your mouth.  so yum. 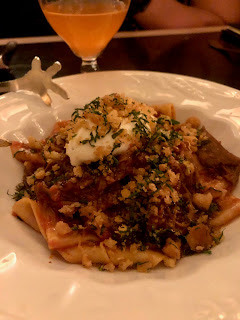 before the main steak course arrived, michael arrived with a box of beautiful, sharp knives for us to choose from.  the old lady and i both chose these pretty mother-of-pearl handles. 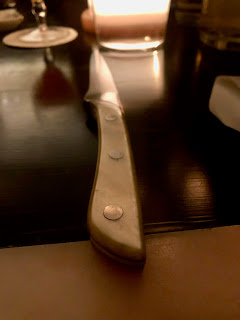 the 80-day dry aged bone-in ribeye steak was amazing.  probably the best steak i've ever had in my whole life.  i'm salivating just thinking about it. 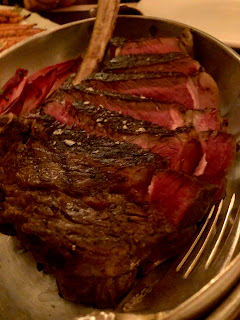 and my only photo of the super fancy, imported 100% wagyu steak is blurry.  it was incredible, with a buttery texture and fantastic flavor. 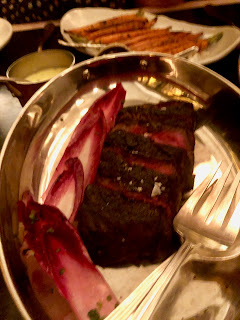 on the side we had an order of the duck fat potatoes and roasted baby carrots. 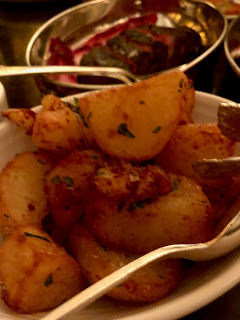 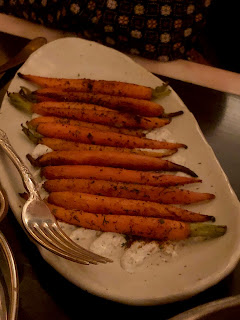 we were pretty much stuffed by the time we finally put our forks down and threw in the towel.  we'd let michael know that we were ready for him to bring on his dessert selections, so we were extra confused when another server came by and dropped off a full order of oysters. 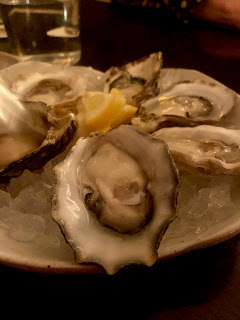 but we'd told him that we trusted his choices for us without question, so the hub picked one up and ate it.  i'm definitely not an oyster fan and neither is the old lady, so we passed.  while her special friend does enjoy them, he was so full from the rest of our meal that he couldn't bring himself to eat one.  and then michael happened to walk by on his way to another table and stopped cold at the sight of that plate.  he was just as confused as we were at its presence, and he whisked it away with an apology and a shake of his head at the error.  we were all pretty amused by it, and then forgot all about it as soon as he dropped off the sweets.  this was a warm chocolate cake served with ice cream and crumbles that i've already forgotten what they were made of.  it was delicious. 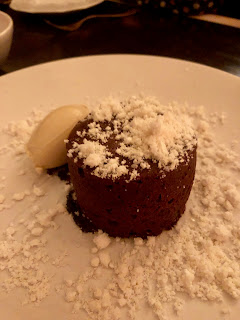 this was a greek yogurt lemon custard thing that was light and refreshing, and a perfect complement to the chocolate. 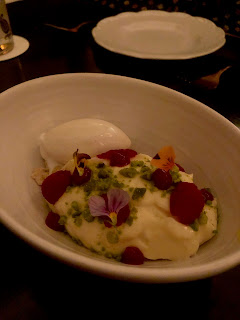 jelly candies and chocolate covered macadamia nuts were our final treat of the night. 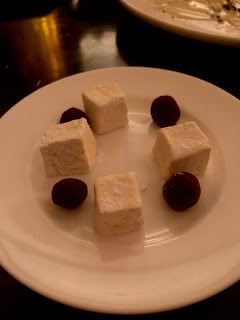 gwen is a fabulous restaurant with wonderful service, delicious food and a great atmosphere.  i will say, though, that it's pretty damn pricey.  it's definitely a special occasion sort of spot.  and i was a little bummed that i didn't have a single curtis stone sighting.  heh.  oh well.

back at the chateau marmont, we decided to hang out at the empty pool.  we enjoyed the peace and quiet for awhile, before the boys ventured out to see if there was anything fun to do out on sunset. 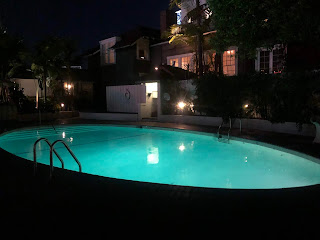 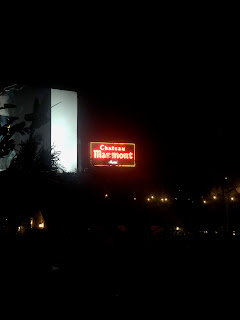 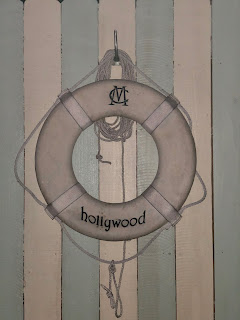 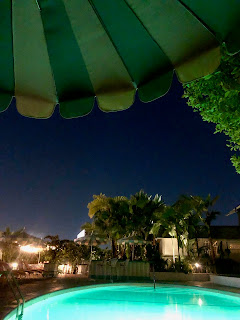 the old lady and i hung out in our room until they returned, just relaxing and chatting away.  i think she might have been a little freaked out at the notion of going down to their room alone.  we'd talked about how this was where john belushi had died, and maybe she was leery of the notion that there could be ghosts haunting the hotel.  that's also why she refuses to ever stay at the queen mary, or the hotel roosevelt not too far away.

Email ThisBlogThis!Share to TwitterShare to FacebookShare to Pinterest
Labels: foodie fun, hanging out on the west side, hub's birthday