i'd gone a really long time without firing up the ol' embroidery machine.  this didn't mean that i wasn't keeping up with all the fun stuff my favorite designers were cranking out, though.  and since we were approaching the holiday season, i was on the lookout for ideas for what might become my 2021 hustle.  you know - like that one year i made a ton of mermaid blankets, or the crocheted pumpkins and trees, the elf quarantine kits from last year, the grinch elf sweaters...you get my drift.

so when i saw my friend jen of parker on the porch post her newest design for some super cute mug rugs, i decided i'd bust out the machine and give it a shot.  and what exactly is a mug rug?  well, it's basically an oversized coaster.  you can put it on your desk or side table or wherever you're hanging out with a drink and a snack, and it'll protect the surface from condensation or heat from the mug or whatever you're using.  and it's totally customizable with different fabrics, text, colors, designs.  not to mention, she found the cutest little wooden trays that the mug rug fit into perfectly - at dollar tree.  see, like this: 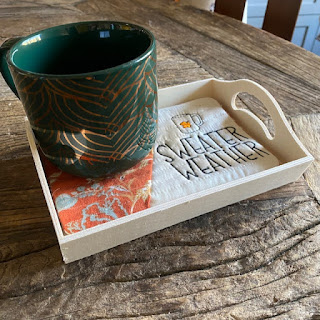 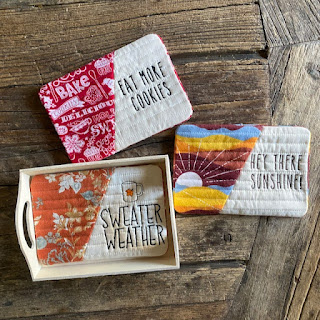 and because they were such a quick sew, they were really addicting.  i had a blast making a bunch of samples, like these: 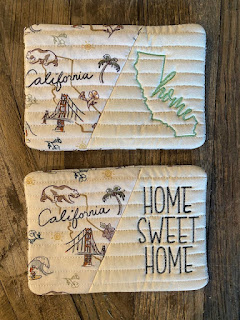 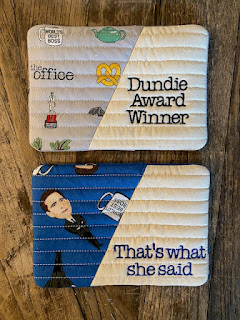 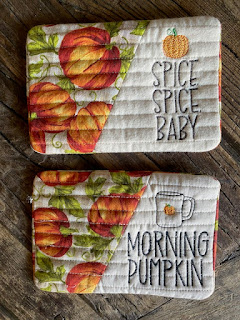 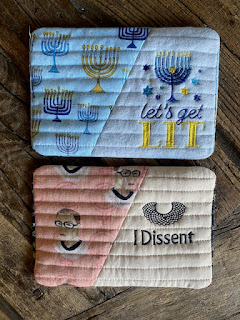 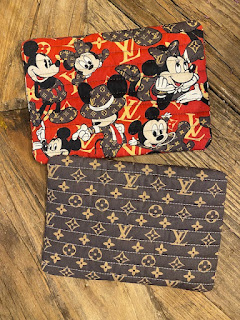 as soon as i posted a few pictures on my facebook page, i had a good number of friends who were interested in picking some up.  i took orders from my mom, one of my junior league friends, one of my mom besties, a friend whose brother i was really good friends with in middle school who also happens to be married to the fiancé's cousin.  nothing sells my handmade goods better than facebook, i tell ya.

anyway, i started working on those orders but remembered pretty quickly why i'd put the machine away for so long.  it's a starter machine and it served me well for quite a few seasons, but after having to fish out shredded thread and breaking several needles and other annoying problems, i decided i was finally ready to suck it up and get an upgrade on my equipment.  i did a little checking around for the next machine up from mine, called my usual shop for availability and cleared my space to make room for what i knew was going to be a much bigger machine than my old one. 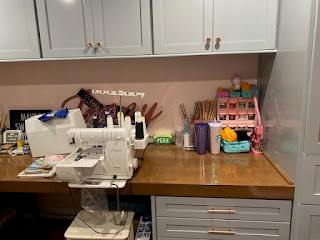 and a couple of days later, i came home with this: 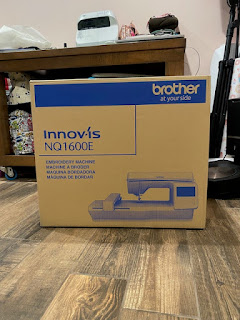 she was very pretty, and super easy to figure out and get started with. 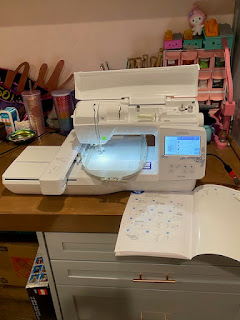 in fact, she was so easy to work with that in no time i had this stack of mug rugs all done and ready to send out to their new homes: 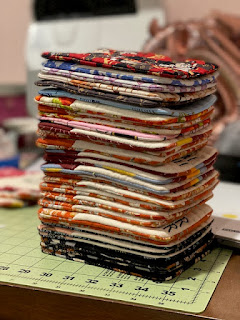 i stitched out this one too, and made some mini cookies to display with it.  i thought it was adorable, but it wasn't a big seller. 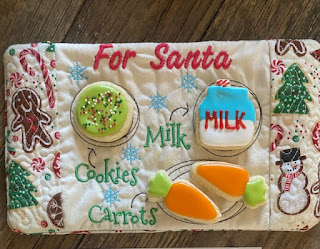 this thanksgiving-themed kitchen towel made me laugh, and when i posted it i ended up making a few sales too. 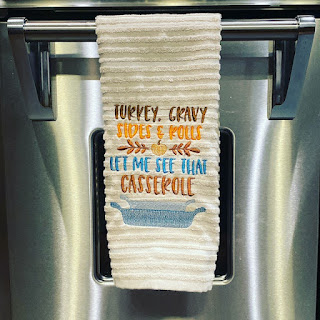 and then as i was getting started on an order of - gulp - 40 total mug rugs, disaster struck:  my brand new machine, just a couple of months old by then, locked up completely.  like, i couldn't figure out how to fix it and nothing i did helped at all.  i panicked and then made myself calm down enough to call the shop i'd bought it from.  after all, it was practically brand new.  they had to be able to help me, right?  hmph.
the guy i spoke with on the phone, who i was 99.9% sure was the same one who handed me the machine when i drove down to pick it up, was super condescending and rude as i explained my dilemma.
"it's a 3-4 week turnaround time for repairs right now," he said.  "they won't even look at it for two weeks."
"do you offer loaner machines?  it's my peak time right now and i have a lot of orders to get done," i pleaded.
"no, we don't have anything like that.  and that's a domestic machine, but you're telling me you're filling orders and that's technically not covered under your warranty.  you did buy the extended warranty, right?"
"that was never offered to me, and i called them 'orders' but they're for friends.  i don't own a shop."
it didn't get any better from there, but i didn't have a choice and so i just arranged to drop the machine off the next day.  i went back to panic mode, had a meltdown and called the hub, who said "just go buy another machine and we'll figure out out.  it's okay."
he went with me when i took the machine to the shop and lo and behold, the same guy was there to receive the machine.  i gave him the vinyl sample i'd been using and he made a big show of inspecting it and saying "this material is really thick, i can see why your machine locked up.  it might not be covered under the manufacturer's warranty because the problem probably isn't due to a defect, so it'll be $299 for the repair."
what. the. fuck.  i told him i'd been working with the same material for years using the starter machine i'd traded in and that i'd never had a problem before.  i really wanted to punch him.
i asked him if they happened to have a comparable machine in stock that i could take home that day, and while they did indeed have the same exact one under a different brand name, we left emptyhanded.  the hub and i agreed that we didn't want to give that store a single penny more, and so when we got home i started making some phone calls.
luckily, i managed to find another sewing shop right down the street from that one that had what i needed in stock, and i could already tell just from the phone call that the customer service was superior to the first store.  i went in the next morning, met the owner of the store who was absolutely wonderful and helpful (and he also told me that if i ever needed repairs that were out of warranty it would take about a week and cost me half as much as that other shitty store), and brought this home: 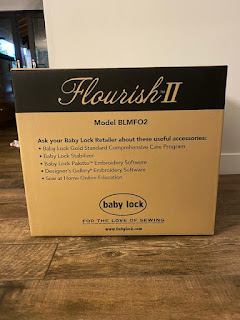 thank goodness, i was able to fulfill the last few orders i had.  and then i even had time to stitch out some little purses to give the bean's dance friends at our annual cookie party. 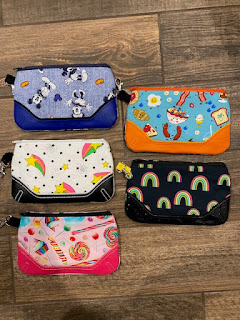 the old lady happened to be in the area when my first machine was ready for pickup, and so now i find myself with two identical machines.  that sounds awesome because it means i have a backup machine OR can run two hoops at the same time, BUT i don't have room in the office for two full-sized embroidery machines.  that room is busting at the seams as it is, much to the hub's irritation.
pffffft.  such a dilemma, right?
at January 19, 2022