an extraordinary date night with the girls

did you ever watch zoey's extraordinary playlist on NBC?  it was a super cute show that ran for two seasons with a cast that included jane levy, skylar astin, and mary steenburgen.  i was super bummed when it was cancelled because there was still so much story they could have told.  plus it was very glee-like, and you know how much i loved that show.  but while the regular show was cancelled, somehow they got the roku channel to pick them up to do a christmas movie, which gave the fans hope that maybe they'd get picked up for at least one more season.  as of right now i don't think anything has been confirmed, though.  bummer.

so anyway, when i saw a post on twitter that was offering free tickets to a screening of the christmas movie, i jumped right on it.  it was going to be at a movie theater somewhere in downtown l.a., with the creator of the show, the cast and other key people present. i managed to secure three seats, and although neither of the girls had ever seen the show they were game to go with me.  thank goodness, because it would have been kind of sad to go all by myself.

the theater was located in one of those newer trendy shopping centers in the financial district, and it was pretty easy to find and park (which is always my concern when heading out to the west side). 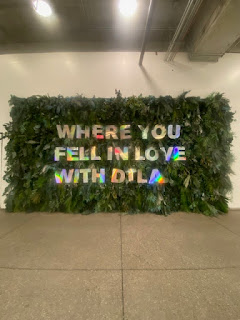 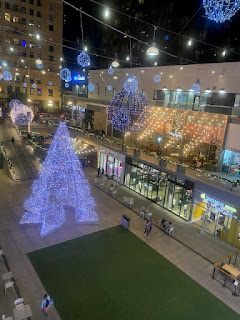 since we'd arrived early, we walked around a little to check out what shops and restaurants there were.  i'd read that the theater was one of those dine-in spots, so we decided to just head over and see if we might be seated early. 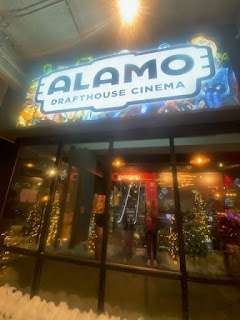 the staffers there were friendly and helpful and directed us to a spot in line for check-in.  there weren't too many people there when we arrived, but it got busier as time went by.  the red carpet was behind us: 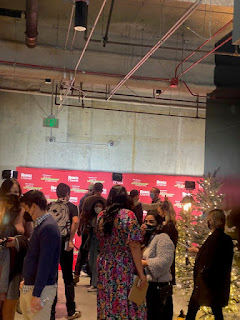 at the check-in desk, i showed our e-tickets and our proof of vaccination and then we were handed tickets with our assigned seats plus masks to wear while inside. 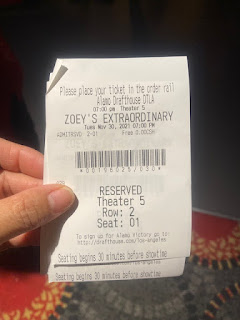 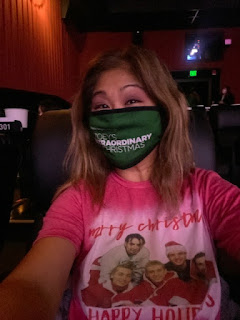 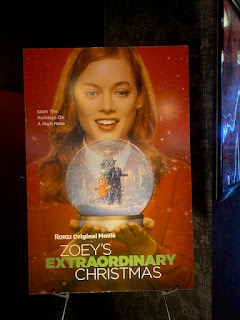 we stopped at the bar, but found that it wasn't yet open for business.  oh well. 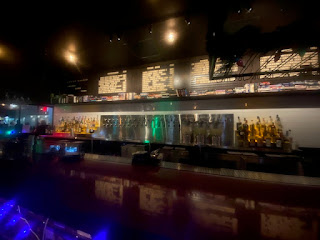 upstairs there was a fun photo op, and since we still had plenty of time and there weren't too many people in line we stopped to take a picture because why not? 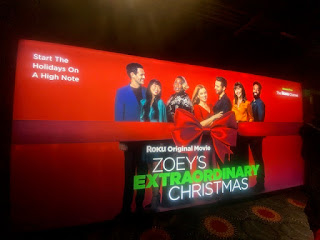 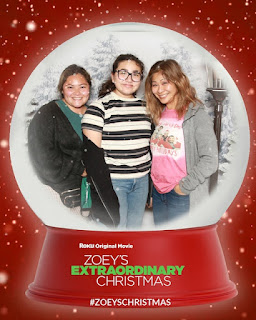 we went into our theater and found our seats, where we each had a bucket of popcorn and a special themed menu along with the other regular menu items to order from. 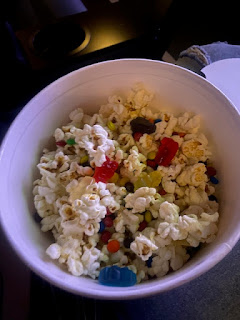 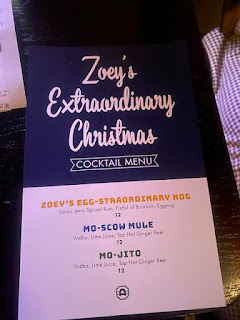 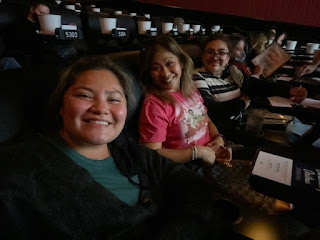 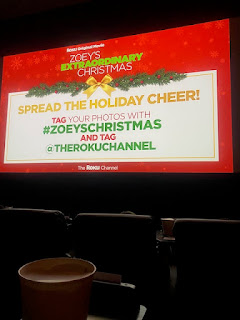 i had to try the spiked hot cocoa served with two sugar cookies, while the old lady opted for the spiked eggnog. 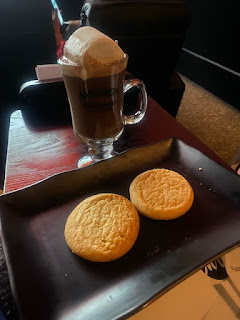 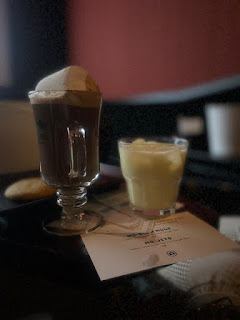 the old lady had the buffalo cauliflower bites for her appetizer: 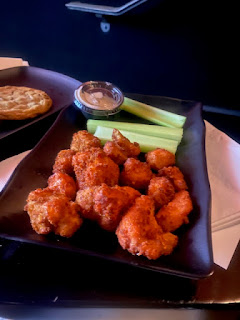 while the bean went for the non-spiked hot cocoa and freshly baked chocolate chip cookies.  hey, it was the christmas season.  cookies are kind of required like every day, right? the food was typically overpriced, but at least it was decent.  i only got a picture of my pizza, but i don't think you'll have any trouble visualizing a plate of chicken tenders and a salad, right? 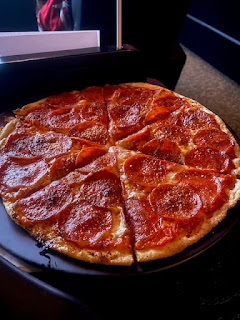 i'd given the girls a quick summary of what the show was about, although the movie also kicked off with a nice little recap of the storyline so that anyone could watch it even if they hadn't been fans of the original show.  the movie was just as cute and fun as the show, and they said they enjoyed it.  when it was over the creator of the show and the cast assembled for a Q&A in an adjacent theater, and someone set up a laptop to stream it for those of us in the other theaters to see. 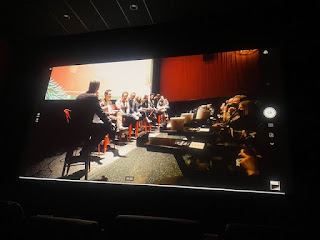 it was a school night and we got home kind of late, but it was worth it.  at least i think it was.  heh.

Email ThisBlogThis!Share to TwitterShare to FacebookShare to Pinterest
Labels: celebrity sightings, going to the movies