croffles. and vanilla. read on:

remember when we tried croffles during our trip to koreatown?  lilcee and i were convinced that they had to be super easy to make, and a quick google search turned up a bunch of bloggers who proved us right.  i'm sure that there are much more complicated/authentic recipes out there, but i was all about the quickie shortcut and that's exactly what we got.

all you need is this: 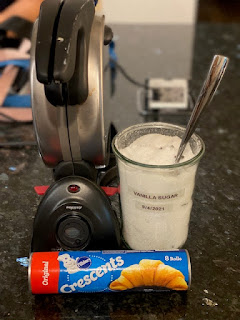 okay, so maybe i dressed it up a TINY bit by using some of my precious vanilla sugar.  i say "precious," but i suppose even that's an exaggeration because vanilla sugar isn't all that difficult, but it's super duper extra delicious.  you take a few vanilla beans, split them in half, bury them in plain white sugar in a jar and leave it alone to infuse the flavor.  because there's some moisture in the beans, you want to go in on a regular basis and carefully break up the clumps that inevitably occur.  but unlike making vanilla extract, which takes a full year (or more, depending on what kind of alcohol you use) to be ready, you can start using vanilla sugar within a few weeks.  ignore the beans that are sticking up in the picture because after i took this i made sure to shove them deeper down into the jar to make sure they weren't left out of the party. 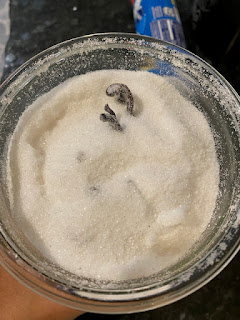 also, did you know that those pretty specks of vanilla bean that always seem super gourmet don't really impart that much vanilla flavor?  you can split that bean and scrape all the goop and the beans out of it and add it to your recipes and you'll end up with some vanilla flavor and a visually appealing product with the specks.  but all the actual vanilla goodness comes from the pod itself.  it's perfectly acceptable to pull out all the "caviar," which is what they call the stuff you scrape from inside the bean, and then take the pods and dunk them in vodka (or rum, or bourbon, or whatever alcohol you want to try).  you just want to make sure that you have at least an ounce of vanilla beans for every 8 ounces of alcohol, use a glass vessel with a tightly sealing lid, and make sure that every part of the bean is submerged in the alcohol because you want to extract from the entire bean.  put it in a dark, room temperature spot (NOT the fridge!) and leave it alone for a year and then you'll have the best tasting vanilla extract that beats the pants off of any store-bought stuff.  i may or may not have a whole collection of bottles brewing in my pantry using several different types of beans from different regions of the world.  oh oh oh - and there's vanilla salt, too!  you make it the same way as the sugar and it makes for a really delicious seasoning on steaks and roasts and all kinds of savory items.  yum.  yes, i've become a vanilla nerd.

all you have to do is take that crescent dough, divide it according to the instructions, and roll it in the sugar before placing into your waffle maker and cooking till it's done.  for me, it was like 4 minutes total.  and i actually sprinkled the whole surface of the dough with sugar before rolling it up because i'm extra like that. 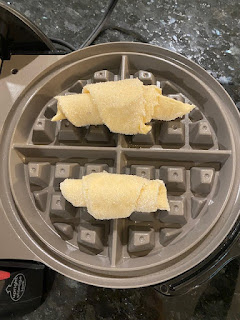 and here's what we ended up with: 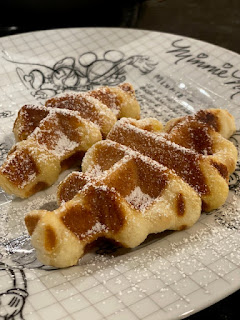 so simple, yet so delicious.  you need this in your life.