black friday is always one of the hub's busiest days at the lounge.  he's typically there from open to close that day, schmoozing with the customers, making sure everything's running smoothly, selling as many cigars and accessories as he can.  this meant that the kids and i were free that day, and while we mostly just hung out we did decide to head out to pasadena for dinner together.

you know, because it wasn't like we had a fridge full of thanksgiving leftovers or anything.  heh.

anyway, the old lady had snagged us a reservation at union in old town pasadena.  i neglected to take pictures of anything but the food, but that's okay.  we were all very pleasantly surprised to find that everything we ordered was really delicious.

if you put bread served with "housemade butter" on the menu, i'm pretty much always gonna want to try it. this is also when i learned that "giardinere" is a fancy italian word for pickled vegetables.  not my thing, but the old lady and the fiance enjoyed it while the bean and i stuck to that bread and butter.

this is the arugula salad, which sounds really simple - and it was - but it was perfectly seasoned and dressed, with olive oil, pecorino romano and olive oil.  i could've eaten a whole bowl of this all by myself. 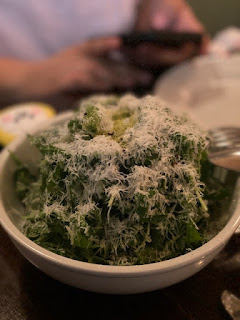 we also ordered the pork meatballs to share, and they were tender, flavorful and delicious. 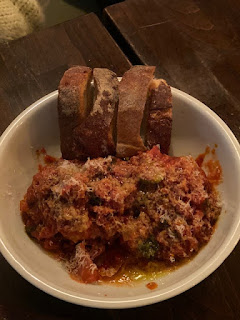 i'm pretty sure this was the old lady's main course - pasta served with a pork ragu, housemade ricotta and fried rosemary on top.  it was right up her alley and she devoured it happily. 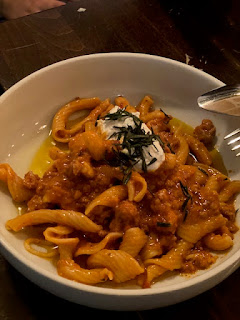 i decided to step out of my comfort zone and ordered the squid ink pasta, served with maine lobster and a truffle butter sauce.  no one else was willing to try it, which meant i ate every single bite.  it was amazing. 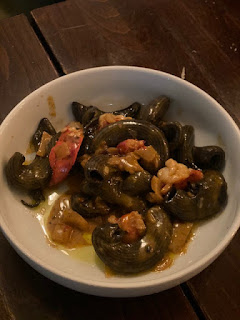 to be honest, this is the dish that actually brought us here.  the old lady had seen a picture of it on the restaurant's instagram and the bean was like, SOLD.  it's their version of cacio e pepe, topped with a perfectly cooked egg.  she cut into it and watched the gooey yolk run down into the dish and then mixed it up and snarfed it all down. 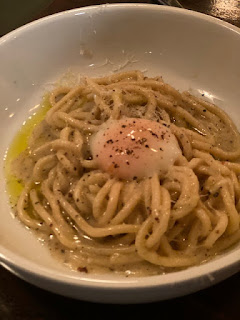 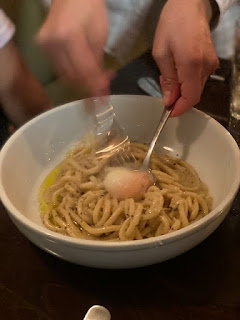 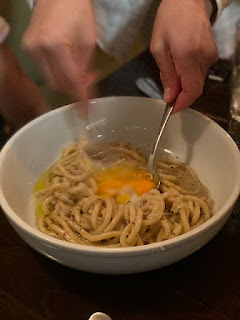 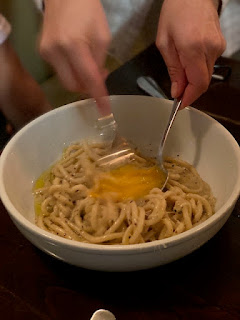 last but not least, here's a blurry photo of the fiance's spicy spaghetti alla chitarra. 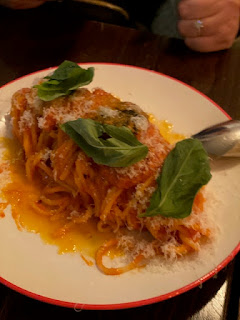 afterwards, we took a walk around the block to find something that had caught the bean's attention.  the first of the long-awaited BTS los angeles concerts were coming up that weekend, and to celebrate wanderlust creamery had created a special ice cream flavor for the occasion. 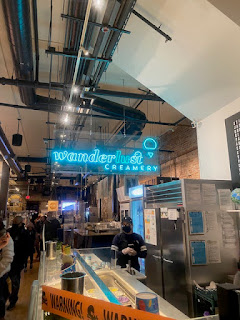 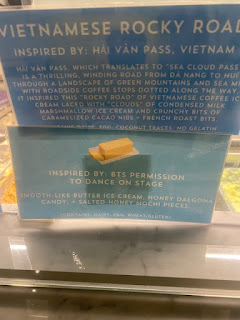 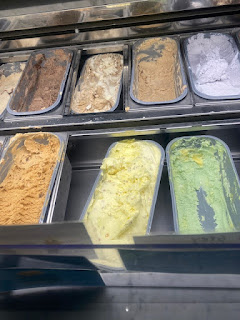 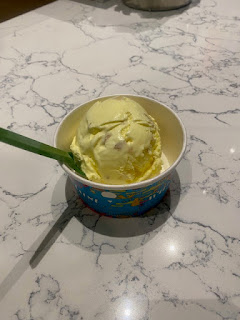 the old lady and i opted for their holiday-themed flavors, while the fiance ordered a thai tea from the nearby boba shop. 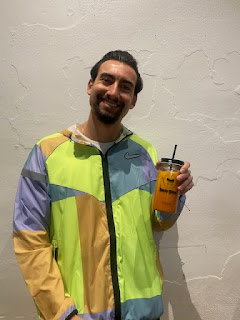 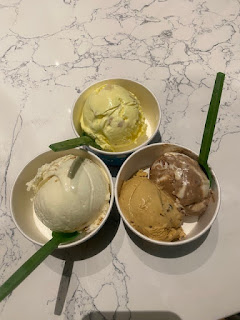 it had been awhile since the four of us had gone out for dinner together, which made for a fun evening.  and we really liked union, so we vowed to pick a date so that we could come back with the hub, as long as he isn't on one of his keto diet streaks.  looks like it'll have to wait till after the wedding.  heh.

Email ThisBlogThis!Share to TwitterShare to FacebookShare to Pinterest
Labels: dinner dates with the kids