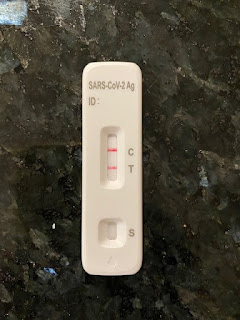 i'd gotten a text from someone i'd seen a couple of days before new year's, fully apologetic but letting me know that she'd just tested positive for the 'rona.  i felt fine - in fact, when her text came through i was on the peloton! - but as the next day or so went by i started noticing a weird tickle in the back of my throat.  i downed packets of emergen-c like it was my job, but it was all in vain.  and when the headache kicked in, i busted out one of our precious leftover at-home test kits and confirmed it.  boo.

i confined myself to the living room, far away from everyone else.  luckily, that booster shot i'd gotten was just about three weeks old by then so i really just felt as though i had a really bad head cold paired with some super intense fatigue.  like, i could barely get up for a glass of water without having to stop to catch my breath.  that part kinda sucked.  and whenever the bean emerged from her room i made sure to throw on a mask, just in case. 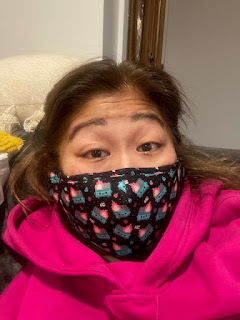 but that, too, was in vain because as it turned out, that new year's eve family hug and selfie session was enough to pass on the virus to my child.  boo again.  she tested positive a couple of days after i did, and so while the rest of her classmates were returning to school after the two-week christmas break, she had to revert to distance learning again.  unfortunately, the old lady tested positive as well.  the only ones who escaped unscathed were the hub and the fiance.
the hub had lots of advice for us based on his own experience with the 'rona - lots of fluids, rest as much as possible but also attempt to sweat it out in the gym if at all possible.  and while i was still tired, when that headache-on-crack finally subsided two days later i headed in there and made myself get some cardio in.  nothing super intense or PR-worthy, just a beginner-level bike ride and a nice walk on the treadmill (i virtually walked through a haunted hotel in louisiana, which was pretty fun).  and i don't know what exactly did the trick, but a mere five days after testing positive another home test returned a negative result.
we waited the recommended number of days and then headed out to a local testing center to do a 3-in-1 test - they did a rapid test, a PCR test and then also tested for antibodies. we weren't aware that that last one involved a finger prick to get a blood sample, and we both freaked out a little, but i knew it was a good idea to have it done.  and to be perfectly honest the finger stick really wasn't that bad - the dagger eyes from the bean hurt more than that did.  and actually, that was more of a 4-in-1 test since they also checked us for the flu.
andplusalso, all that time at home gave me the chance to actually finish that cardigan i'd started working on the day after christmas.  that's probably the fastest knitting project i've actually completed, like ever. 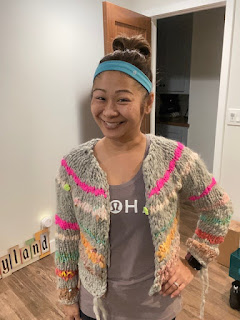 the bean finally got to return to school, having missed about a week and a half, and she was really glad to get back into the routine - as was i.  we didn't get to see the old lady for almost two whole weeks, which really sucked.  but it was so good to finally hug her when our quarantining period finally ended.  and i'm so grateful that we were all fully vaccinated and that our bout with the omicron was relatively short and mild.  you just never know how your body's going to react to any of it, you know?

thank goodness for vaccines.  and science.

Email ThisBlogThis!Share to TwitterShare to FacebookShare to Pinterest
Labels: coronavirus