while we were in san jose, i'd gotten a text asking me to make some "friends"-themed cookies for a birthday.  the designs were simple enough, and i thought maybe it was a good time to finally debut the buttercream frosting in an order.  but i knew that there was no way i'd be able to freehand that easily recognizable font.  and so i decided that it was time to try out something else that would be new to me - using a projector to trace what i needed to put on the cookies.

of course, nothing i do ever seems to go smoothly.  as i was mixing the cookie dough using my trusty pink kitchenaid mixer, i somehow managed to get the pour shield in the way of the moving beater.  it stopped working immediately, and when i turned it off and on again, the beater wouldn't budge and the motor made a terrible noise.  the kitchenaid website offered practically no assistance aside from the option to mail the mixer in for repair, but like the broken embroidery machine a couple of months ago i didn't really have the luxury of time on my side.  sigh.

r.i.p., pinky.  you were so pretty and gave me ten years of service, and i loved you so much. 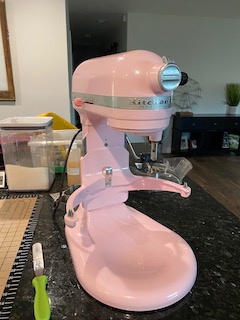 after doing a quick search for inventory in local stores, i ended up going to target so that i could use my red card for the 5% discount and picked up pinky's new brother...minty. 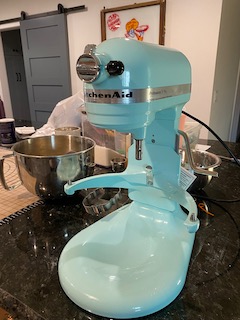 he's pretty in his own way, but i really wish i could've found another pink one.  or even one of the matte black ones.  something that might have actually matched with the rest of the kitchen.  le sigh.  he's a little smaller than pinky, and slightly less powerful, but at least the bowl and other accessories i had still fit and now i have two sets of stuff to use.  that comes in handy, anyway.
as for pinky - well, i debated trying a little harder to figure out how to get her fixed.  and then i came to the conclusion that i really didn't have any room to put her anywhere, and getting her fixed and then trying to sell her would be a pain in the ass.  and so i did this: 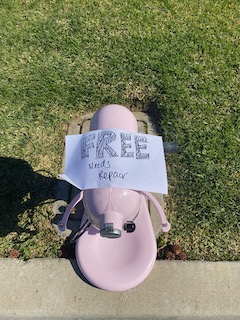 unsurprisingly, she was out on the curb for roughly ten minutes before someone drove by and snatched her right up.
anyway, i got back to work on those cookies and once they were mixed, rolled, baked and cooled i was ready to set up the projector and give her a go.  i was really happy to find that setting it up and getting the design sized just right took just a few minutes, and then i was breezing right through decorating those cookies. 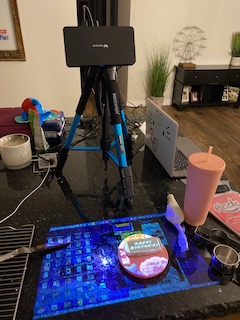 see what i mean?  super simple and clean.  and buttercream frosting holds the designs beautifully, without any spreading or smearing - unlike the corn syrup glaze i've been using for years.  it's not as easy to spread for a smooth work surface, but i think it looks nice in an imperfect way. 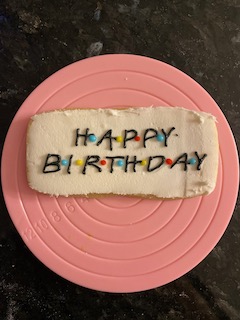 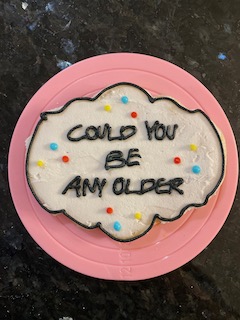 and here's how the whole set looked.  i found a simple line drawing of the famous frame that hangs on monica's door, sized it and traced it onto the other cookies.  not bad, if i do say so myself. 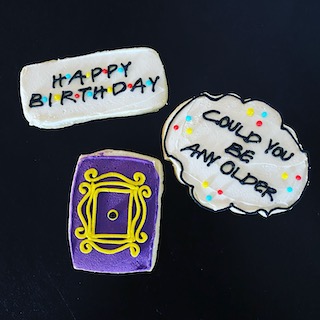 the buttercream frosting hardens just enough so that the designs don't smear and can still be individually wrapped, just like i always do.  and i think it tastes really good, if not slightly less sweet than the glaze.  now i just have to convince everyone who places a cookie order that buttercream is the way to go.  it's so much easier and faster for me to mix it up, especially since i don't have to make two separate batches of each color like i used to before.  the consistency is perfect for both spreading and decorating, which i really like.
eek. wish me luck.
at February 28, 2022