i know, i know. i shouldn't be letting this ridiculous facebook bullshit get to me. but it is, and i'll tell you why:

i care what people think of me.
i don't like admitting that, because it seems so petty and stupid. although i do believe that most people who insist that they don't care what others think of them actually do, and in fact care quite a lot. but acting as though it doesn't matter is a great way to keep people from seeing too much. obviously, that doesn't apply to everyone - it's just a silly theory i have.

blogging began as a fun thing for me - an easy way to document the ordinary day-to-day activities of my life, as well as what the teen and the bean were up to. i enjoy looking back on posts a year later and reminiscing, and i've also found that it's a great outlet for me to get my thoughts out and work my way through them. sometimes they're pretty personal, a lot of times rather comical, and i've received some great comments and e-mails from readers who offer support, laugh at my antics, and even come to their own realizations about their own lives. so for me, blogging has turned into something that's quite therapeutic.

as i was writing yesterday's post, i came to the conclusion that the reason why i care about others' opinions of me truly stems from all those times that i had to go to a new school, be the new kid, and prove myself all over again to a whole new group of kids who most likely didn't really give a shit whether i befriended them or not.

so although this person on facebook means absolutely nothing to me, his fucktarded posts on an open, public forum questioning and judging my life really, really piss me the fuck off. and as i mentioned yesterday, the whole high school thing is one of the few hot buttons that never fails to get me going.

i was laying on the couch with the sleeping bean last night, playing solitaire on my iPhone and checking e-mails. i clicked on the facebook application (because i'm freaking addicted to that damn thing) and was absolutely floored to find this:

and i was LIVID. i was so incensed that i couldn't even take the time to snicker at the absolute irony of the damn post. i'd been polite in my previous reply to this ridiculous person, answered his question truthfully even though i knew i had no reason to justify or explain myself to him, and he couldn't just leave it alone?

i couldn't help it - i popped off with another reply that was a whole lot less polite and a hell of a lot more angry. i pointed out his lack of reading comprehension, spelled out that i'd received a proficiency certificate more than a year before i was scheduled to graduate high school, and the most painful part (for me) - that i'd never claimed to be a college graduate. well, and then i threw in a cute jab about how his writing skills in his posts didn't exactly put him in a position to judge my education background. heh. come on - i had to!

as we were getting ready this morning, i was filling the teen in on the facebook shenanigans. she was just as pissed off as i was about the whole thing, and the conversation continued as we got in the car to head to school. and when i told her that both the high school experience and my lack of a college education were sensitive subjects with me, she looked at me and said "that's totally my dad's fault. i'm sorry, mom."

how much do i love this girl, really? i mean, really - i love how she thinks things through and so often comes up with the right conclusions, or close. when i told her that she had nothing to apologize for, she followed it up with "well, it was mostly because of him that you ended up making those choices, isn't it?"

and she was right. i'd met her dad when i was particularly vulnerable and easily influenced. and i was so in love with him and wanted to do whatever i could to spend time with him that i sacrificed a lot - a whole lot more than i realized back then.

sooooooo...i just de-friended the facebook d-bag. i was hesitant at first to do it, because god knows what he'll post next, but i figure, he's truly nothing. and he made himself look like the idiot with those horrible, want-to-poke-my-own-eyeballs-out-because-he-can't-write posts.

anyway! to end this post on a lighter note, the vegetarian dinners have been...interesting. i made a nice green salad the other night and served it with that trader joe's "chicken" - and let's just say that it's a good thing i left it on the side. because it turned into mollydog's dinner. 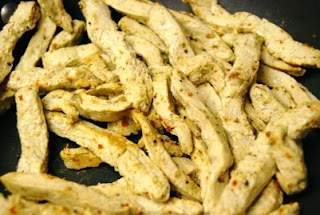 it looks like chicken, right? even had the right texture. but even with seasoning, there was no disguising the taste of the stuff. this shit was straight nasty. the hub and the bean spit their bites out, and the teen made faces at it before finally tasting it and then rushing to wash it down with a glass of water. blech.

at least the red lobster cheese biscuits i made were good. 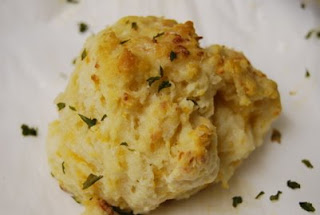 the teen made dessert for us. i'd bought a couple of bags of these: 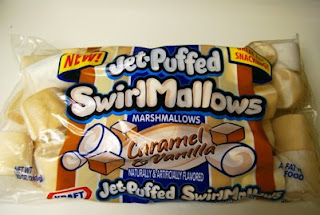 and she made rice krispies treats with them. the caramel in the marshmallows smelled wonderful, and added a really nice flavor to the krispy treats. 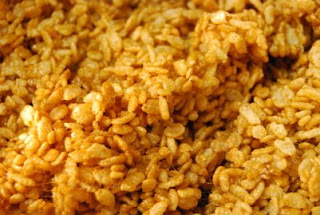 i highly recommend these, if you can find the marshmallows. so yummy! 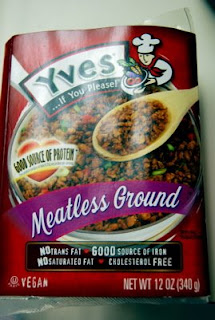 i decided to see if i could disguise the fact that it wasn't real meat by putting it in my beloved tater tot casserole. i put it in a skillet to warm it through: 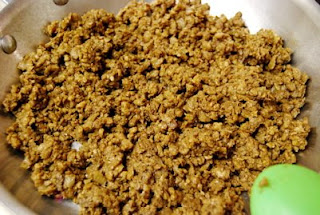 and then assembled the casserole. yes, i ran out of regular tots and used the round ones to finish it up. 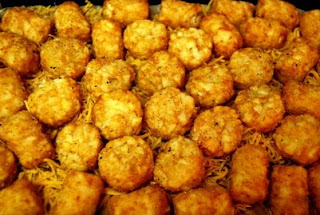 i did taste the "meat" first, and while it was noticeably different from regular ground meat, it wasn't that bad. it had the right texture and the flavor was slightly soy sauce-ish (which isn't shocking, considering that it's made from soybeans). and it went over well enough - i didn't even get a chance to take a picture of the finished product before we dished it up. the teen still didn't love it, but the hub and i cleaned our plates. heh.

here's a few bean pics - i laughed as she took one of my reusable grocery bags and made a backpack out of it. 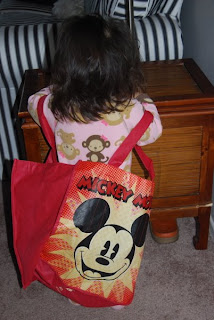 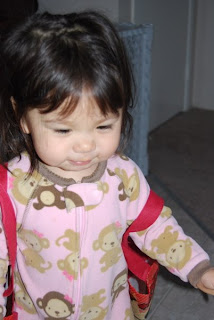 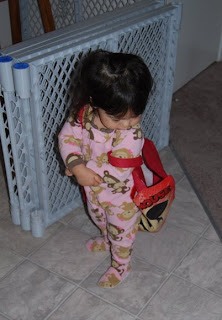 and then she got tired and decided to take a load off and rest a little - in the dog's bed. 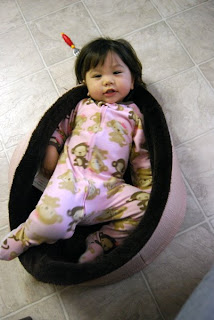