when it rains, it pours

so last week, i was nonchalantly browsing on my local craigslist, and came across a job posting that sounded pretty sweet. part-time, minutes from home, in a field i'm quite experienced in.

no, not prostitution. hmph.

anyway, i decided to toss 'em an e-mail to get more information on the position. a few minutes later, i received a response with a link to a "core capacities index assessment." i clicked on the link and found myself at the beginning of one of those lame ass personality tests. blech. but i was bored, and it was easy enough, so i went through the 3-page process and then e-mailed the office back to let them know that i'd completed it. and not more than an hour later, i got a call requesting an interview. ha!

now, i'm all about the SAHM-4-lyfe. really. i love nothing more than being home with the bean, with my schedule completely open for lunches with friends or MIL, being able to pick up the teen from school, taking off for random overnight vacays whenever the opportunity arises. but at the same time, it would be nice for the bean to be able to hang out with someone other than me 24/7. and as for me, i wouldn't turn my nose up at being able to get out of the house for a few hours a day, having a reason to get dressed up, and being around adult folks for a while. although i still went into this thing half hoping they wouldn't end up offering me the job. haha!

i didn't even have a freaking resume. i couldn't find my old one, and was so loath to start from scratch that i strongly considered not bothering to bring one along. nice, huh? but i sat down this morning (yeah, i'm a procrastinator) and hammered one out. the funniest part to me was that i had no problem remembering the dates of my jobs from the last ten-ish years, but i couldn't recall for the life of me what my duties had been. so funny. anyway, i ended up with a decent resume, which i printed on some lovely heavyweight cream-colored paper, and put them in a pretty flowered manila folder.

i dropped the bean off at the hub's grandparents' house, headed down to the office, and found myself in the area WAY too early. like, i was 20 minutes early. so i swung through starbucks for a treat and then made my way to the office.

and as i'm sitting in the parking lot, checking my e-mails, i find not one but two separate inquiries for invitations. pink paper designs has been pretty quiet for a while - i hadn't even gotten any inquiries for a few weeks. i ended up scheduling a meeting with one potential client, who's going to bring along her sister - a bride still in need of an invitation vendor. yee-haw!

the dude who was to interview me was damn near 20 minutes late. ugh. but hey, better him than me.

he finally showed up, and he was a really nice guy. it was a nice looking office, and i could totally see myself working there. we chatted for about half an hour, and although i honestly didn't give a shit as to whether i was offered the job or not, i found myself turning on the interview charm. out of all the interviews i've had in my life, i've only ever not been offered the job once. so i suppose that it was just natural for me to ramp it up and somehow make myself look like i really wanted that damn job. i'm such a geek.

and then when i got home, i had yet another new potential client e-mail! awesome.

we'll see what happens with it all. either way, i'm a happy camper.

last night, i made some serious comfort food for dinner: cheddar-topped shepherd's pie. i chopped up the veggies and sauteed them with a little oil: 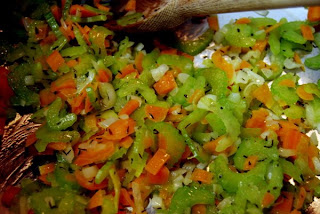 added the ground beef, a bit of tomato paste and flour, and some water: 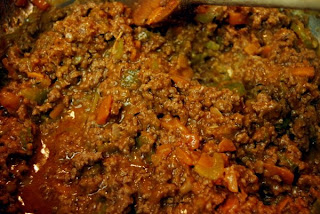 layered it in the pan with some cheesy mashed potatoes: 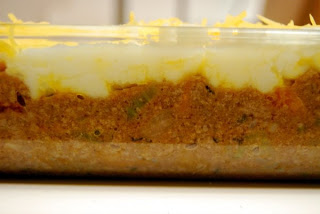 and all the while, the bean was at my feet, pointing at the oven and warning me: "ot! mom! ot!" 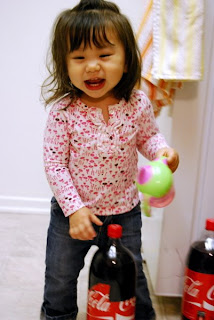 half an hour later, i pulled it out of the oven, all "ot" and cheesy and bubbly: 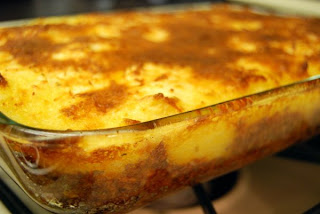 it ain't pretty, but it sure tastes delicious. 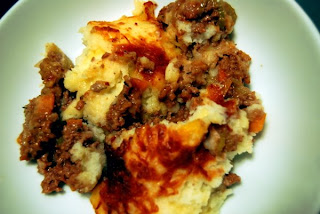 i'm now debating between a few places for the hub's birthday dinner: roy's, fleming's, or smitty's grill. decisions, decisions. which would you pick?
at March 31, 2009

Email ThisBlogThis!Share to TwitterShare to FacebookShare to Pinterest
Labels: clients are coming outta the woodwork, interviewing is fun, the hub's turning 30

caught in the webb again

like last year, the bean and their BFF registered for a 10-day sleepaway summer camp at the webb schools, a local boarding school.  the day ...