okay, so i took those cake balls i made last week and did a test run on one of them to see how complicated it really is to make mr. potatohead out of them.

of course, i couldn't find the black candy-coated sunflower seeds called for in the recipe.  so i improvised and bought a roll of soft, chewy black licorice and cut tiny strips to form the moustache.  not wanting to waste too much of the peanut butter candy melts, i poured a few into a mug and melted them in the microwave.  while i waited, i gathered all the other stuff to work on my masterpiece. 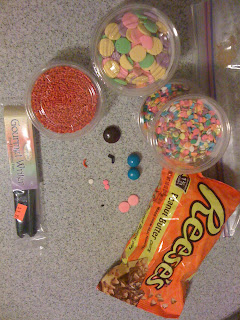 when the candy was ready, i speared the bottom of one of the cake balls with a lollipop stick, dipped it into the mug - and it was a big ass FAIL.  there wasn't nearly enough candy in there to dip the entire cake ball in one smooth motion, and i hadn't stuck the stick far enough in either.  i went to pull it out and the whole damn potatohead fell right off the stick and into the mug.  crap.

but i poked it again with the stick, used one of the bean's baby spoons to try and coat the bottom of the cake ball, and then couldn't stop laughing at the mess i'd made.  he was all lumpy and bumpy and shit, and looked almost nothing like the beautiful, smooth-textured finished potatohead i was using as an example.  bah!  so i moved on and started sticking sprinkles and candies on him to give him a face.  look at how pathetic this is: 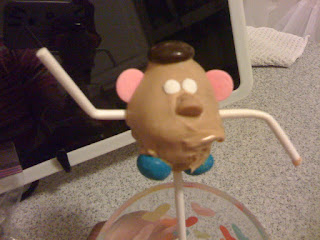 muahahahaha!  pretty bad, huh?  but i at least had the gist of how it should go, and felt fairly confident that when the time comes to melt a whole bag of peanut butter candy, i'll be able to do a better job of dipping in one fluid motion.  hence, the test run - see?

i whipped out my black edible ink marker and drew on his eyes and brows and added the rest of the decorations. 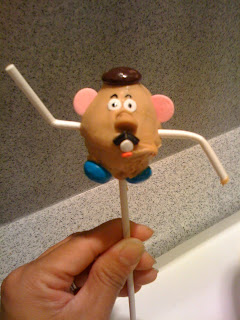 obviously, the licorice is a bad idea.  i'm going to have to order those damn black sunflower seeds online - preferably in a few weeks, when the weather [hopefully] is a little cooler and i'm not having to add cold packs and pay for 2-day service to ensure that they don't melt in transit.

the bean was entranced with my creation.  after all, she's still 2.  she doesn't care, she thinks it's pretty darn cool, lumps and all. 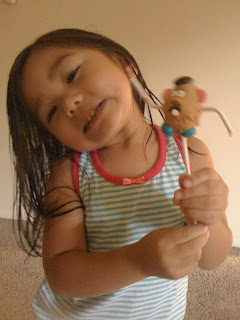 i set him in a cup and placed it against a canister in the kitchen to rest overnight.

but it wasn't enough.  the next morning, we found this: 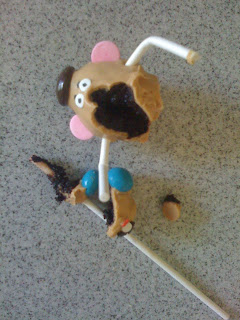