all the world's a stage

the bean had her very first performance on the stage last weekend.  it was the preschool's annual christmas program, and she and her class had been working really hard for a month on the three songs they were to sing for the audience.

i was a little nervous for her, as she really had no idea what was going on.  she would tell me stories about practice, like "my friend got to hold the mic!" and "we got to practice in the gym ON THE STAGE!"  it was really fun to hear her tell us all about it.

the teen and i had originally picked out a super cute outfit from gymboree, but it didn't meet the hub's approval.  "blue and brown?  that's not christmas!" and so we ended up shopping that morning to find something more, uh, suitable.  luckily, we found something that worked, and she even had a brand new sweater in her closet that matched it perfectly. 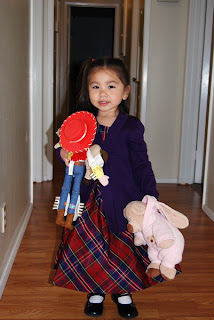 of course, on show night, it rained.  ugh.  but we managed to get there on time and found our way to the classroom where her teacher was assembling the kids to get them ready for their big debut.  she's obviously watched her sister and me pose for the camera a few times, or sixty. 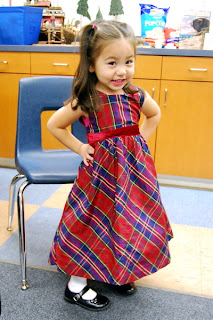 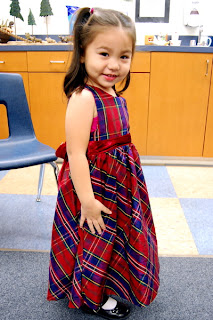 those pictures kill me.

she gave me a hug and kiss as we left the room, just like a regular school dropoff.  we'd been given strict instructions to leave immediately so that the staff could do their job and calm down any kids that were freaking out, but she impressed me yet again with how calm she was.  i was more nervous than she was, obviously.  heh.

we got little bags of mistletoe with our programs: 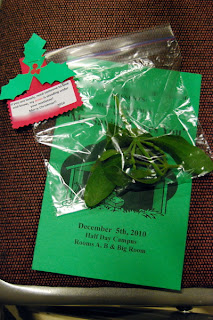 the teen totally spoofed a few of the little kids who clenched their hands together and squeezed their eyes shut for the prayer. 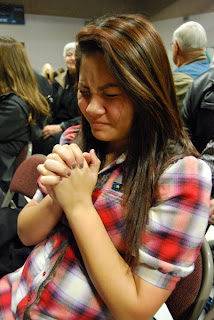 and look - we had donald trump in da house! 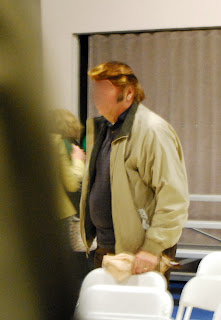 i thought i was going to melt into a puddle and die as we watched the curtains open, revealing the bean and her classmates all lined up on stage.  and watching them sing along and do all the little hand gestures to the songs...ah, man.  it was priceless.  do you love how she was totally center stage? 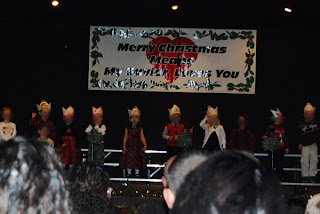 and then at one point, she stepped down and took her place at the one of the three microphones for a song.  in the middle, natch.  that's my girl. 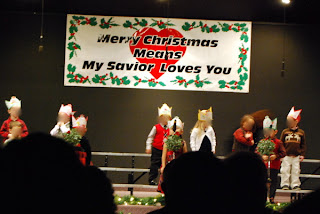 i pretty much thought i was going to explode with pride, and as i did when the teen was in her first school performance, i totally teared up.  as she sat next to me and made fun of me, of course.  but something about those innocent little voices singing their hearts out always makes me cry.  we all know i'm a sap like that.  it doesn't even have to be MY kid.  oy vey.
at December 10, 2010

Email ThisBlogThis!Share to TwitterShare to FacebookShare to Pinterest
Labels: bean is a diva, it's beginning to look a lot like christmas