a total FAIL turns into a big WIN

these temperamental little cookies are definitely getting the best of me lately.  oy vey.

i'd promised the JLP girls that i'd do a batch of macarons as my contribution to our cookie exchange, and had debated between doing candy cane flavored ones, or eggnog.  both are lovely, seasonal, sound delicious, but in the end, the candy cane won.  i wanted to tint them red (or as close to it as i could get) and sprinkle crushed candy canes along the sides - quite festive, yes?  the eggnog would likely be super delicious too, but i didn't have any way of jazzing 'em up for presentation.

following a tip i'd read on a blog somewhere, i pulverized some candy canes and added the powder into the mix for the macaron shells along with a shitload of red powdered food coloring. 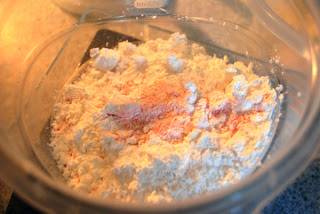 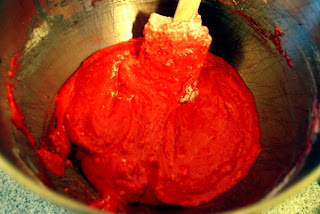 i'd also decided to try grinding my own almonds instead of buying pricey almond flour.  but as i mixed everything up, scraped it into a pastry bag and started piping my shells, it turned out to be a huge mistake.  i should've sifted it afterwards to make sure there weren't any big chunks left, and of course, there was a ton of 'em in there.  bah!  still, they looked promising. 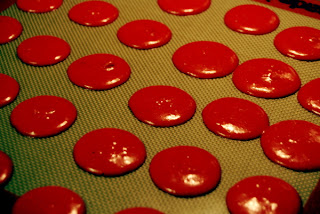 except that they SO weren't.  look at the mess that i pulled out of the oven: 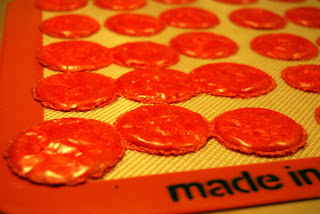 there's pretty much nothing right about those things.  as my friend claire said in response to my miserable tweet, they looked like misshapen wax seals.  totally unrecognizable as macaron shells.  eff, man.

i pried them off of my silpat and tossed the whole mess straight into the trash.  i sat there debating my next move for a few minutes - just do something easier?  other cookies that would still be delicious but much less tricky?  but in the end, i turned to the "foolproof" recipe that's saved me before and fired up the mixer again.  and look - not nearly as colorful, but so way better. 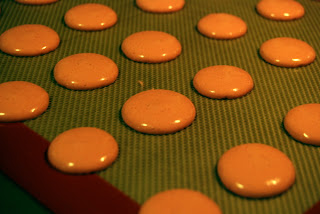 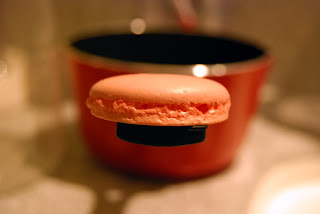 i was pretty much over the macaron-ing by then and decided to wait till the next day (the actual day of the gathering) to make the filling and assemble them.

i followed tartelette's buttercream filling recipe, which was a little different from the simple method i've used before.  in hers, you take the egg whites and some sugar and whisk them together in a bowl over a couple of inches of simmering water until it looks like marshmallow fluff.  then you beat the shit out of it until it's a thick meringue, and then mix in the butter until it's all incorporated.  i added more food coloring and some peppermint extract and tasted it when it was done, and all i could taste was the butter.  this isn't typically a bad thing, but when you want a sweet, minty filling, it's not fabulous.  so i reached over and grabbed a couple of handfuls of crushed candy cane (the teen was working hard on this, and gave me the stink eye as i ended up taking about half of what she'd been laboring over) and mixed it in.  but it still wasn't quite right.  i ended up adding what probably amounted to half a cup of powdered sugar and a bit more candy cane, and then it was finally what i wanted.  phew. 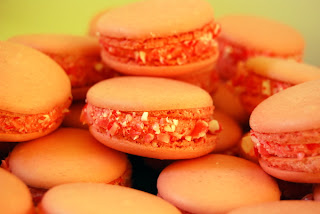 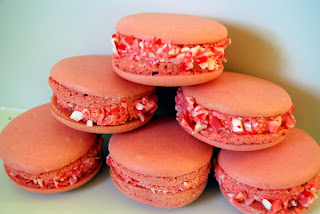 i took one of my white boxes that i use for delivering invitation orders and chopped it down to the size i wanted, stuffed it with tissue, and nestled two dozen of the finished macarons in it. 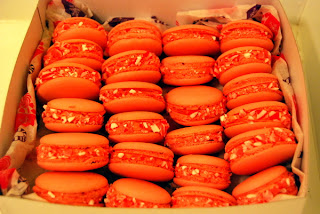 i must say, these may very well be the best macarons i've made yet.  not overwhelmingly sweet, just the right touch of mint, and that "foolproof" recipe lived up to its name too.  slightly crunchy on the outside, but wonderfully chewy inside.