to give or not to give? that is the question.

so anyway...i bet you've been saying to yourself, "i wonder if wan's ever going to get back behind that sewing machine again.  and when she does, what on earth will she MAKE??"

no?  not even a little?  because i'm about to answer that question for you, and i'm thinking you've been on the edge of your seat waiting for it.

well, fine.  i'm still going to share it, because i don't really have anything else to talk about right now.

the hub has had a couple of co-workers spring forth from their loins, and lucky for me, both of the newborns are girls.  i've been waiting for the chance to make something cute and tiny and fun, and even though he gave me "the look" when i mentioned sewing a gift rather than buying one, i forged ahead.  heh.

i found some cute lightweight printed corduroy on sale at joann's, which was just begging to be made into a sweet little dress.  using this tutorial, i tackled my first-ever attempt at using piping, which kind of failed pretty miserably.  obviously, i was far too confident in my sewing skillz than was warranted. 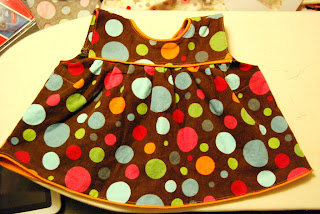 from far away, the dress isn't that bad.  i'd envisioned gifting this with a long-sleeved onesie, a pair of tights, and maybe a matching blanket.  pffft.  and i was too embarrassed (or far too vain to show you proof of exactly how badly i botched this one) to do any close-up shots to show you how truly awful it really is.  let's just say that the bean's baby doll just got lucky.

i decided to head in a different direction and headed over to my friend rae's blog, for her "itty bitty baby dress" tutorial.  i've been successful with her patterns in the past, and i knew i could count on her for an easy-to-follow project.  but i'm just a glutton for punishment.  while i was 95% pleased with the end result, my lack of piping skills (apparently, i just suck at piping whether it's sewing or baking) left me questioning whether or not i could actually give this as a gift. 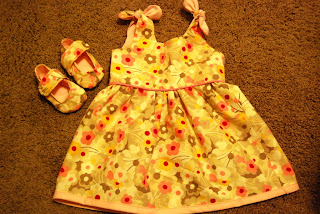 you can't see from here, but the ends of the piping didn't quite meet properly and now i have a weird little section on the side that i have to figure out.  maybe i'll cover it with a bow or a button or something. random, but maybe it'll work.

and see those little matching shoes next to the dress?  i used this tutorial to make them, and while they aren't perfect either, they're not bad. 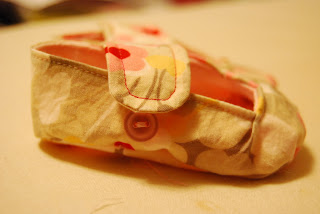 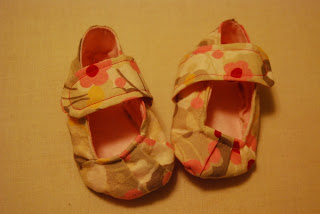 i decided to give rae's dress another shot, this time just skipping the piping altogether.  and i was VERY pleased with how it turned out this time.  a little less exciting, with no cute little decorative touches, but at least it's actually good enough to present to a new mom. 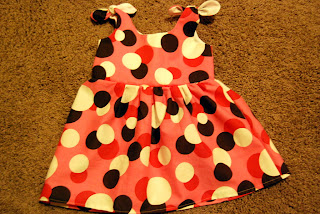 and even the inside of the dress is pretty - i used some pink bias tape to cover the seams where the bodice (with white lining, thankyouverymuch) meets the skirt, used pinking shears on the sides of the bodice, and went the french seam route for the sides of the skirt.  no ugly ragged edges on this dress! 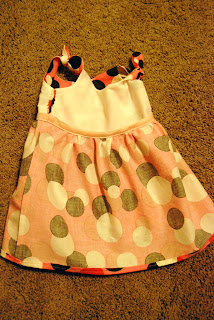 and because i effed up in cutting the pieces out of the main fabric, i didn't have enough to make the blanket i wanted to do.  so instead, i'm giving those little shoes another shot and am halfway through the first one.  it already looks better than the other pair.  i'm going to stick with the onesie and tights idea, though, and maybe make a blanket in a different pattern (in similar colors).  think that'll make a good present?

oh!  totally off-topic, but so fun - i tweeted a link to my yo gabba gabba live recap last night.  and my timing was perfect, it seemed, because the folks at YGG actually read the post and tweeted me back - not even just once, but three times! 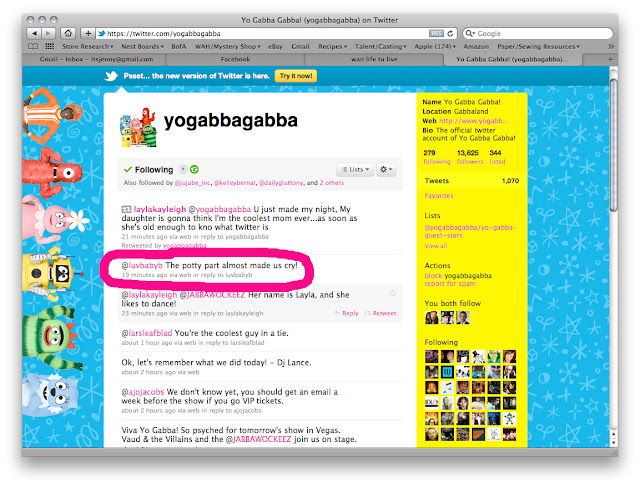 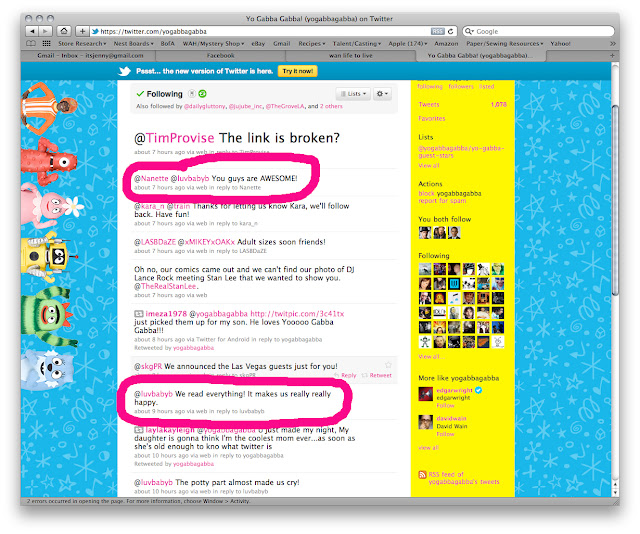 that pretty much made my night.

oh, and while i'm on the subject of twitter, i gotta tell this story, too.  so the hub's off on a one-nighter to vegas with some guys at work.  i thought i'd hit him up to bring me home some macarons from one of the fabby places on the strip that i haven't seen (since i haven't been there in three years).  using my iPhone, i posted a tweet that was supposed to say "where should i send the hub to pick up some macarons for me in vegas?"

except that the stupid ass autocorrect decided to kick in right as i hit "tweet" - changing my "macarons" to...

i almost deleted the tweet, but was laughing too damn hard.  and i thought it would be awful to deprive my friends of the huge belly laugh i was indulging in.  so i just followed up with an explanation:  "OMFG, autocorrect changed "macarons" to LAXATIVES?"

and then i couldn't stop cackling.  i was seriously laughing so hard, tears were rolling down my face and i was giggling and snorting and i thought i was going to pee my pants.