late to bed, early to rise

that is some ass backwards shit, man.  but last night was absolutely crammed with stuff to do, starting with two batches of macarons.  two, because the first was a complete flop (and i was just too mortified to take a picture of them, for serious).  the second batch was still not perfect, but passable.  enough to fill and make some macaron pops (which i discovered helps to hide some of the misshapenness): 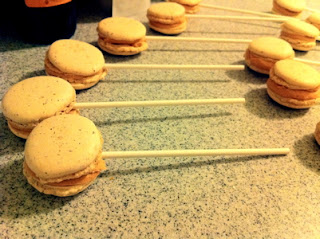 i'm totally blaming the weather.  humidity is poison for baking.

but the batch of shells i'd made the day before were much better.  i'd made these for my mom, who'd asked me to help her out with dessert for a dinner she's throwing this weekend.  i gave her a dozen and filled another dozen for an order i took for tonight: 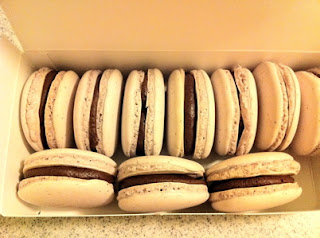 too bad i could only fit ten in there and had to put the other two in a baggie.  they turned out well, though - just simple shells with a dark chocolate buttercream filling.  i tinted them violet, but you can't tell so much.  oh, well.  at least they taste good.

and after that, we were off to meet the hub for dinner and some christmas shopping.  i knew this meant a long night for me, because i still had another two dozen cutout cookies for tonight's order.

i was so right.  i didn't get started until after 10, rolling and cutting and baking - luckily, i'd mixed the dough the night before and it was nice and chilled.  and because i'm a glutton for punishment, i'd decided to do bakerella's cute little santas that i'd discovered just that afternoon.  they sure seemed simple enough, but good god a'mighty, they were time consuming.  by 2:00 am, i finally finished these: 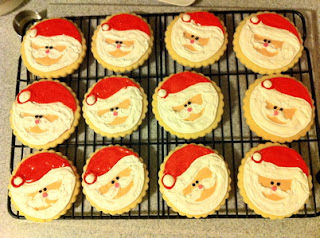 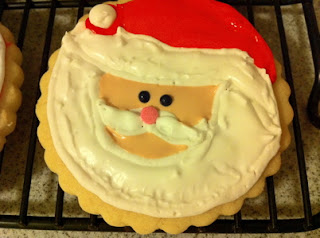 they're also not perfect, but cute enough for this order.  oh, and a dozen of these little guys (much easier to do): 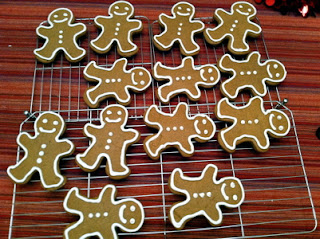