beer macarons. yeah, i went there

it actually wasn't my idea.  a friend of a friend threw it out there as she was asking me to make some valentine's day cookies for her.  she said her husband was a huge belgian beer fan and she was wondering if i thought i could incorporate it into a macaron somehow.

i'm not typically all about making my own recipes.  i like using tried-and-true ones, and hoping that my stab at it turns out well.  but i was feeling up to a challenge, and there had to be someone who'd already tried it - or so i thought.

i googled and googled, and - nothing.  but then i got to thinking:  what if i just boiled that beer down into a syrup?  reduce the crap out of it until it's thickened and the flavor is really concentrated, and then stir it into a thick buttercream as the filling?

i decided to give it a shot.  she'd also asked if i could use natural food coloring as they were trying to avoid artificial dyes for their family, and so i found it online.  this was the first time i got to try it out - i wondered if it would be as vibrant as the regular gel colorings i typically use. 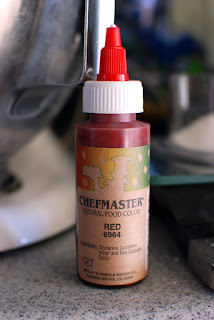 i mixed up the macaron batter easily, going by memory on the measurements.  and the color looked pretty good, yes? 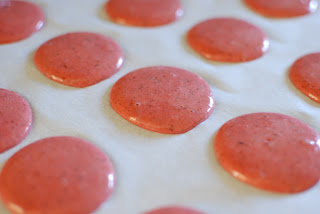 while i let them sit out to dry, i got started on that beer syrup. 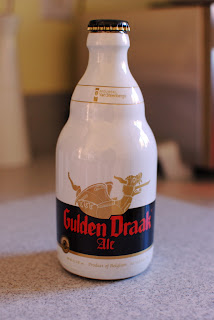 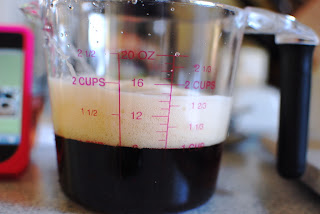 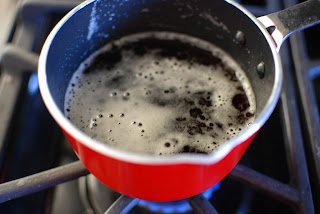 when the hour was up, the beer was still reducing and the house smelled really...funky.  i popped the macarons into the oven and got busy working on other stuff as they baked.  they looked good, and i was happy to have them done. 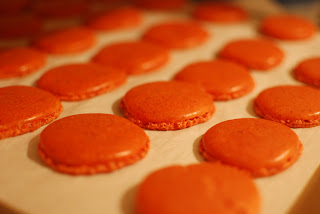 except that they...weren't.  they were so sticky that i couldn't get them off of the parchment paper in one piece, and i got so frustrated i just tossed both sheets right into the trash and decided to start again the next day.  gah!

the beer had dwindled down to just a few tablespoons' worth, but was still rather thin.  i tossed some brown sugar into it and it thickened up nicely. 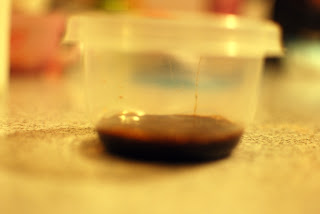 the next day, i redid the macarons.  somehow, they turned out just like the first batch.  i think i'm baking them at the wrong temperature.  WTF did i do differently from a couple of weeks ago?  ugh.  but i didn't have time to play around, so i used the few usable shells i had and filled them with the buttercream i'd made.  i did a simple butter and sugar mixture and then used some of the leftover beer in place of the liquid.  i folded in about a tablespoonful of that beer syrup, and while it was a little...odd, i figured it was because i 1. hate beer and 2. wasn't used to the smell of the dark belgian stuff. 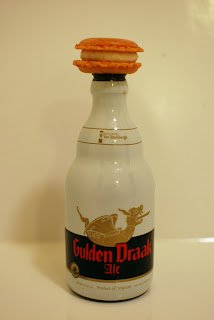 i force-fed one to the hub, who reluctantly admitted that it was pretty good, and MIL said she thought it tasted a little butterscotch-y.  the teen thought it was good too, and so all that feedback was good enough for me.

at my junior league meeting (where i test out a lot of my experiments lately), they went over pretty well.  i brought about ten macarons, and there was half of one left by the time the meeting adjourned.  all in all, i think the friend-of-a-friend will be happy with them.