ever since i discovered a ton of awesome cookiers through their blogs, i've been obsessed with practicing my design skills on these edible canvases.  of course, with everything else going on in my life, there's just never enough time to do it all.

last week, i managed to carve out a little time to mix up some sugar cookie dough, roll it, and cut and bake some fun new shapes.  i wanted to play with some ideas i had bouncing around in my head (i even made a list, how lame am i?), and was dying to give them a shot.

except that this came up, and that had to be done, and more of this was first priority, and so on and so forth.  so i had the cookies all cut out and sitting in an airtight container, just begging to be decorated.  i've learned that the part i love the least about this process is making up all of the different colors and consistencies of icing required to achieve my cookie fantasies.  and so it took a whole day for me to find time to make a batch of the stuff, divide it into a bunch of little tubs, and color it all.  ugh.

the red was the biggest pain in the ass.  i was using the all-natural food coloring gel i'd bought, to test it out and see how bright it could get.  and it took a lot of freaking product to get it this color.  bah! 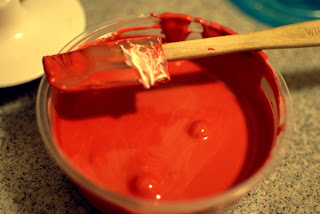 i also needed to make brown, but couldn't seem to get it dark enough with the dye (again, using the natural stuff).  i ended up dumping a little cocoa powder in it to help it along, which actually made it smell and taste wonderful.

with just enough time to do some outlining and flooding, i got to work.  first, some super fun ones that were really easy to do: 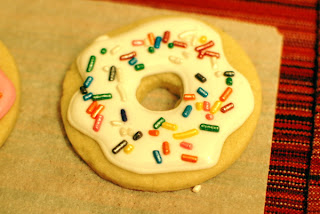 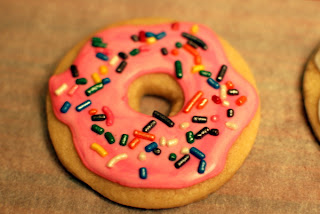 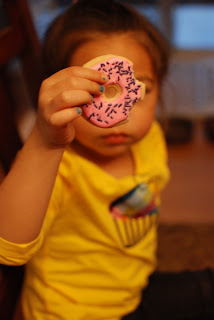 and then on to these: 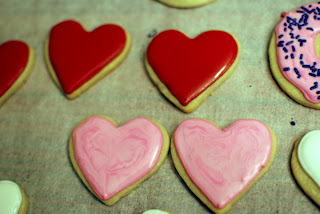 see that crazy marbling in the pink hearts?  yeah, it's not supposed to look like that.  it just means i didn't quite mix the color in as thoroughly as it needed to be.  such an impatient mofo, i am.  and then i got a little overzealous with this one.  when i tweeted a picture of it, my friend lilcee said "ew, it looks like it's bleeding." 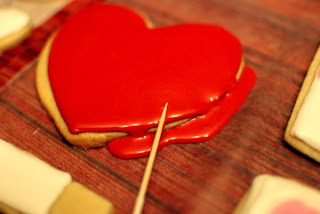 borrowing an idea from those gross candy conversation hearts that we're always bombarded with at valentine's day, i made these: 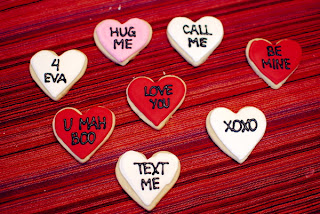 and let me tell you, i thought of doing these anti-valentine's/emo/angry cookies while bored at work, and couldn't stop giggling at the thought.  i was seriously cracking up as i made a list of stuff to write. 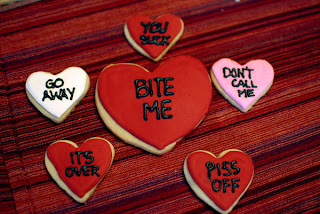 i bet you somebody out there has somebody they'd like to give those to.  right?

the girls on twitter have been aflutter over this palette of pretty, neutral eyeshadows by urban decay - oh-so-sexily named "naked."  i'd resisted the temptation for a long time (not to mention, the thing was so popular it was sold out everywhere for a long time), but when one of the girls mentioned having an extra one, i jumped at the chance to buy it from her. 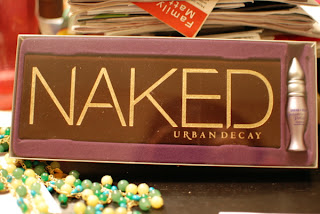 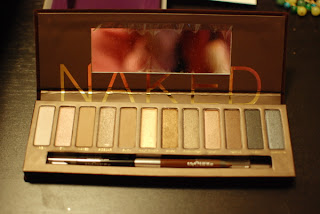 and where am i going with this?  well, it took a ridiculous amount of mixing tiny dabs of frosting to make this: 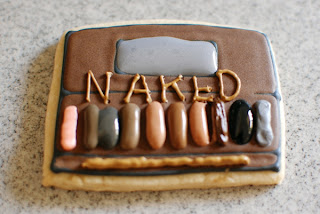 and it's so not even perfect.  the "mirror" is all blobby and uneven and full of little air bubbles, the "naked" looks like a two-year-old wrote it, i don't even have the right number of "shadows," my "eyeliner" is the wrong color because i dumped the black icing before i thought of it, and some of the colors are wacked out because the frosting was either too runny or too thick.  oh, well.  i still got a kick out of it.

this last one was actually inspired by the cupcake boxes at work.  i wanted to make a replica of the shop's logo and add it on, but i ran out of patience.  and besides, i really dig how cute the multicolor dots look against the dark brown base.  they actually remind me of the chocolate chip ball i'm helping to coordinate with my junior league sisters. 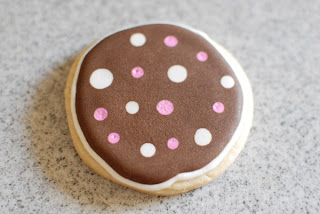 i made a volleyball, too, but i guess i didn't take a picture of it.  i want to make a bunch and hand them out after the teen's last game.  actually, i likely didn't take a picture of it because i screwed up one of the lines with my black icing and it looked a little wonky.  but other than that one stupid little line, it was pretty darn cute.  heh.

practice makes perfect, right?  and with my last day at dots coming up in a little over a week, i'm thinking that the wan house is always going to have little frosted tidbits at hand.  some will be cute, some might not be, but at least they'll be scrumptious.
at February 07, 2011