this was a good week for food truckin' for me and MIL.
we kicked it off last weekend with "first friday" at the speedzone - this time, just us and the bean.  the teen was with her dad (boo), but we decided to go anyway.  as MIL said, she only has a few weeks left to enjoy the deliciousness of these trucks before she leaves for texas.  well, i sure wasn't gonna argue with that.
we found most of the same offerings as last time we went, and made a beeline for the lobsta truck - our favorite.  having arrived nice and early, the line wasn't too bad when we got there. 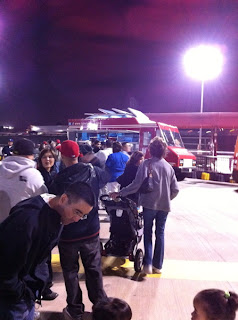 we'd decided to use the "divide and conquer" method, in order to gather as many delicious morsels as we could without wasting time.  so as the bean and i hung out in that line, MIL headed off for the buttermilk truck, where she picked up two orders of this awesomeness - red velvet pancakes with cream cheese topping. 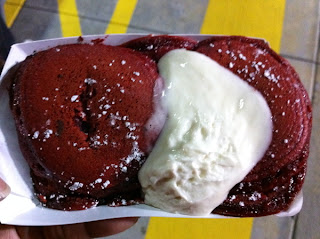 i'd wanted to try those last time, but had already stuffed myself silly with other grub.  she and the bean shared one order while i headed off to the tapaboy truck for some homeland eats.
except that when i got there, i was super bummed to see that what we wanted wasn't being served that night.  boo.  stupid blue tape Xs. 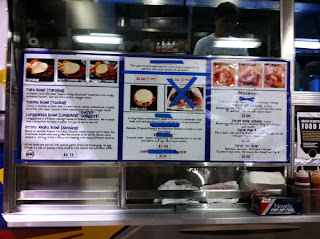 so i improvised.  i ordered a tapsilog bowl, which reminded me of breakfast on camping trips with my family - super garlicky fried rice with marinated beef, a fried egg, and a bit of papaya relish.  i also picked up a dessert item i thought MIL might like.  turon is basically a banana eggroll, but the banana is rolled in some brown sugar and joined by a slice of jackfruit before taking a quick dip in hot oil to crisp up the wrapper.  pretty nasty in my opinion, but you know how i feel about fruit anyway. 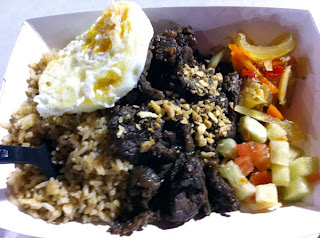 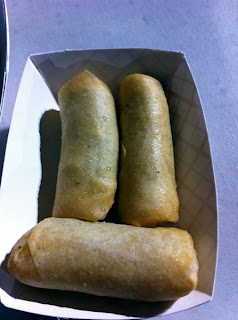 as i expected, she enjoyed it.  the bean poked at it and lost interest in about 1.2 seconds.  just like her mama, oy.
of course, we couldn't leave without some sort of dessert.  and despite the chilliness of the evening, we went for some frozen treats. 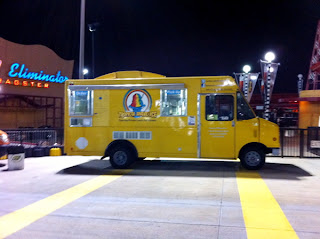 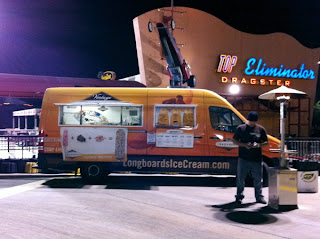 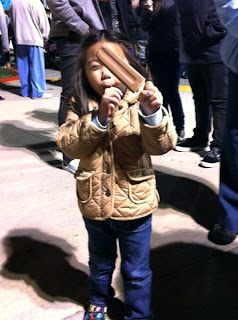 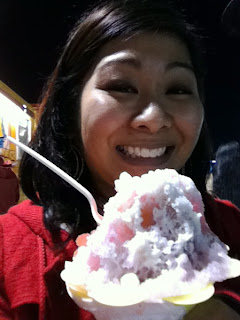 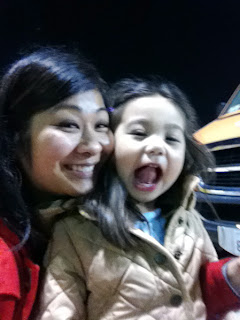 and then on tuesday, the cupcake shop served as host to the grilled cheese truck.  when we went to the 'fest at santa anita race track a couple of weeks ago, silly fools waited up to four hours for a sandwich from this truck.  that's insane. 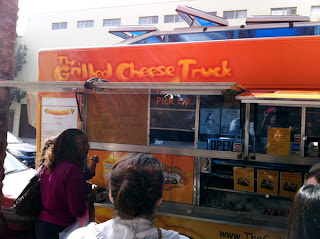 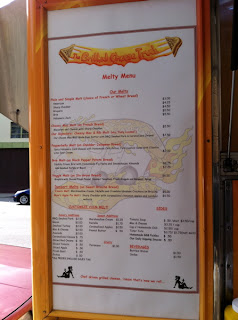 i was super excited to try it, and even more so when they called to say they'd arrive a half hour early.  i hoped this meant that the lines wouldn't be insane, but it didn't occur to me right away that they'd tweet it  right after talking to us.  and so people were already waiting even before they got there.  ugh.
i was seeing my "fully loaded" sandwich slipping right through my fingers, when the owner came in about 5 minutes before my shift ended to take our orders.  even better?  she refused to let me pay for mine.  i felt bad, because i was ordering three (one for me, one for MIL, and one for brother wan, who wanted to see if he could replicate it at work), and even after i said so, she said it was on the house.  sweet!
when i clocked out and saw the line, i was even more grateful.  i would've been standing around for a good hour, between the ordering and waiting for my sandwiches.  yikes.  instead, i went up to the window and tried again (in vain) to pay for my grub, and left about ten minutes later with three steaming hot foil-wrapped sandwiches in my clutches.
the "fully loaded" - grilled macaroni & cheese made with sharp cheddar, caramelized onions, bbq pulled pork.  and yeah, it was as good as it sounds. 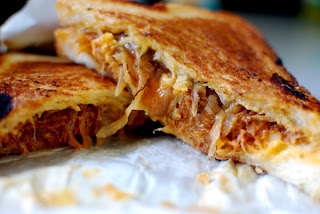 and to top it off, the lobsta truck made an appearance at city hall one afternoon.  i got there about half an hour before they were scheduled to depart, and was beyond thrilled to see that there was zero wait - definitely a first. 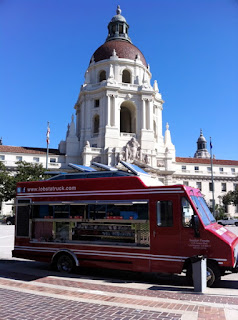 i brought home yummies for both me and MIL, and we sat at the kitchen table and savored every bite as the bean took her afternoon nap. 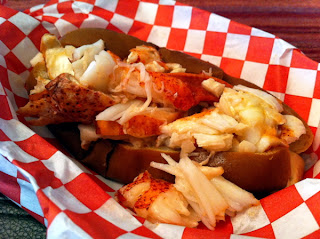 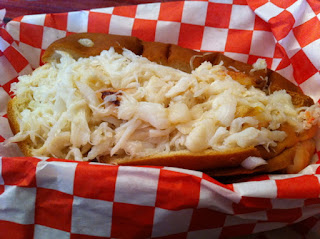