i don't even know how i found it, but i've got a new favorite cooking blog.  it's called "how sweet it is," and i've been reading it for days now.  jessica is hilarious, hates vegetables like i hate fruit, loves bacon and butter and sugar, and often bakes delicious-looking treats that combine sweet and salty.  i've bookmarked i-don't-know-how-many recipes to try on my unsuspecting family in the weeks to come.

and then i realized that the cookie jar was empty.  this is unacceptable in the house of wan, as you well know.  so i decided to try one of her cookie concoctions - with as many as she's done, it was hard to pick one, but i managed.  it also helped that i already had all of the ingredients in my pantry.

hot cocoa cookies sounded really delicious on a chilly night.  and the batter smelled exactly like a lovely cup of its namesake.  it made quite a bit, and i only had the patience to make as many as my two cookie sheets would hold (i've really gotta invest in a few more of those things).  so i scooped it out, shoved the pans in the oven, and put the rest of the batter in a plastic container to bake later. 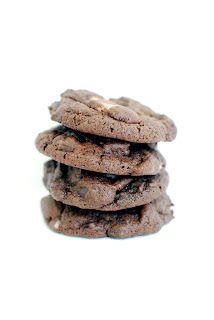 let me tell you, they taste as good as they look.  just like a cup of hot chocolate with melty marshmallows in it.  and because it's been chilly (okay, it's been in the 50's, but that's frigid for soCA), the chocolate chips hardened back up quickly, just the way i like them.  you know how most people love ooey, gooey squishy chocolate in their cookies?  not me.  i like to eat them the next day, after the chips are back to their original condition.  like...crunchy, but not.  oy, i'm rambling.

and then with a junior league meeting to attend last night, i decided to be a good wife and make dinner for the hub and the bean to share in my absence.  usually, they just go out and grab something, but i thought it would be nice to leave them something nice and warm.  i turned to my new favorite blog and decided to try the bbq chicken pasta bake.  again, i already had all the ingredients in the kitchen, just waiting to be thrown together, and the house smelled yummy as i worked.

i found it funny that i'd managed to find everything to make two different recipes just sitting around, when i had a shopping list about a mile long that i needed to tackle.  sometimes i don't realize how much we really do have...except that i often find myself wanting to make something new that requires stuff i don't keep on hand all the time.  but in fact, our pantry, freezer, and fridge are pretty darn well-stocked.  i bet we could eat for a couple of weeks without going to the grocery store for anything besides milk and eggs.  maybe i'll give that a try.  uh, next week.

because the hub feels about vegetables the way mr. how sweet feels about meat, i decided to toss a couple of handfuls of frozen green beans in the mix.  i giggled as i imagined jessica's horror at my addition to her recipe.

and then i realized what a dork i really am for thinking she would give a shit what i do.  heh. 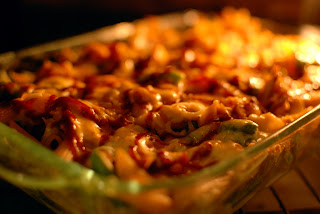 i also have her to thank for showing me that trader joe's makes this: 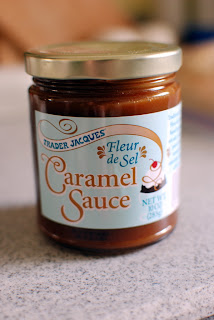 and wait till you see what else i've already whipped up from her blog - in the four-ish days since i've been reading it.  wow, i'm really lame.
at February 24, 2011