wow, easter really snuck up on me this year.  maybe it was because the teen had spring break so stinking early, but i was so thrown off schedule that i never even got around to buying easter-shaped cookie cutters.

and so the day before the bean's easter party at school, i found myself wandering the aisles of michael's and joann's looking for something suitable.  i'd signed up to bring cookies and juice boxes, which i figured would be fun practice for me.  i really wanted an egg-shaped cutter, but ended up settling for a bunny instead.  my goal was to make cute little chick cookies like the ones i found on another blog, but i decided that i could still get the same result even if i used a circle instead.

mixing up the dough and rolling it out is pretty much second nature by now.  and i was pretty stoked to finally use up the last of this giant bottle of vanilla extract.  i've had it for ages (i'm talking YEARS here. thank goodness it's alcohol-based and never expires) and have packed and unpacked it during about half a dozen different moves.  heh. 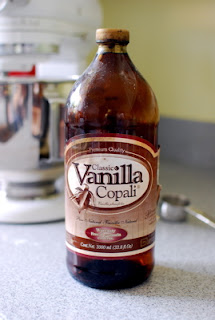 and i managed to score these bakery emulsions at ross, of all places - for a fraction of the cost i've seen them online for.  these are super duper concentrated flavors, even more so than regular extracts you find at the grocery store. 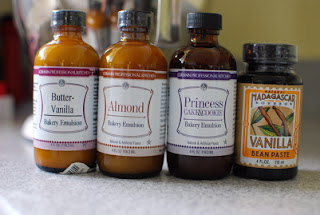 i was kind of bitter when i started moving the baked bunny cookies from the silpat to my cooling rack, because i didn't wait long enough (such an impatient mofo, i am) and ended up snapping off an ear. 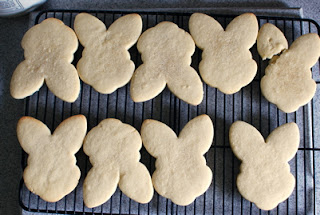 although it ended up okay, because i used it for test purposes - trying out the face and outlining the ear to see if i liked how it looked. 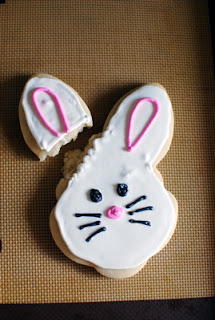 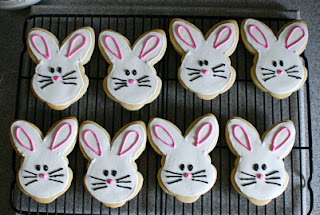 my little chicks turned out really well, too. 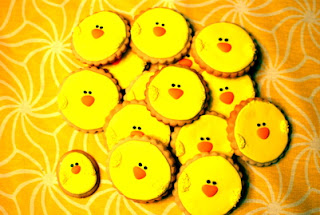 since the bunnies were rather big - like almost 6" tall! - i decided to wrap them up and give them to the kids in the bean's class as a take-home.  maybe they could share it with a sibling or their parents or something. 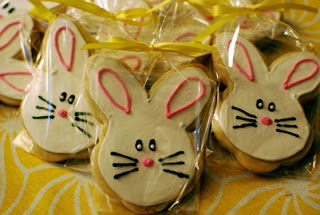 i'll have to remember to hit up the craft stores for cutters waaaaay in advance from now on.  lesson learned.
at April 26, 2011