i am so behind on this post, it's pathetic.  i mean, look at the date on the ticket: 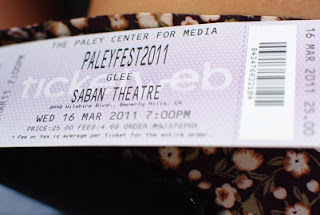 but it's still totally worth recapping.  you'll love it.  well, if you love glee like we do.

when the lineup for this year's paleyfest was released, i was totally bummed to see that my beloved glee wasn't in it.  i'd had such a great time last year taking the teen, and she isn't able to join me for the glee live '11 tour (i may or may not still be going.  heh).

and then my friend insomniac dropped me an e-mail with the last-minute announcement that the cast of glee was indeed joining in on the fun.  i was so stinking excited to see that the date totally worked out, traded a few giddy e-mails and texts with lilcee (my fellow gleek, who's always down for stuff like this - thank goodness), she bought the tickets and we were set.

being on a wednesday, and the first week after MIL's departure to boot, it was a little tricky getting out of the house on time.  the hub ran late, we hit traffic, it was a mess.  and when we finally pulled up to the saban theater - about 15 minutes before showtime - we found ourselves in a battle for a parking spot.  i'd had to take the queen mary (AKA the hub's ginormous tahoe), and the closest lot to the theater was completely full.  when we finally got to pull into the next lot we found, across the street, the attendant waved me away.  "too big," he said.  "you won't fit in any of the spaces."

gah!  we were starting to freak out, because time was running pretty damn short.  so we did a few circles before finally finding an office building where there was lots of parking and we weren't in danger of scraping the roof of the car on the ceiling.  it was a little more of a walk, but we were grateful to finally be done with it.

i'd already gotten a text from amber, who had arrived early (read: on time) with nanette, which told me that they'd somehow managed to secure seats for all of us.  whew, that was a relief.  last year, we'd stood in a ridiculously long line and we feared having to sit in the very back.

as we speed-walked down the street, we passed what looked like the press line/red carpet/VIP area.  i was totally rubbernecking as we sped along, but didn't manage to see anything, of course. 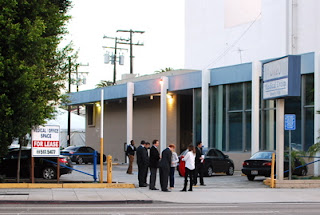 finally, we were there. 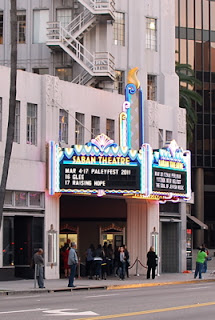 we literally found amber and nanette, took our seats and plopped down for about a nanosecond before the lights went down and the party started. 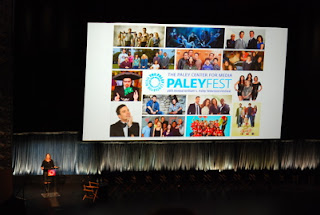 i don't even remember who our moderator was, but maybe you'll recognize him. 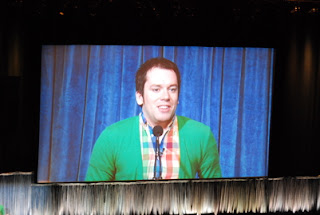 because of the timing, there were no new episodes ready to give us a sneak preview.  instead, they screened the most recent episode that had aired just the night before.  well, damn.  the teen and i had practically killed ourselves to squeeze in watching it before we'd left and were so relieved when we'd managed to see the whole thing.  well, she did.  i saw most of it in between trying to get the bean settled and making dinner for her and the hub.  but it was okay - it was a great episode and i was happy to see it in its entirety.
and then the cast was introduced.  so awesome! 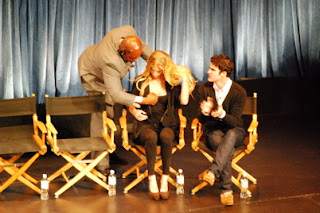 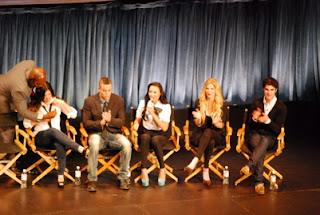 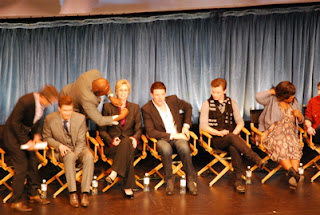 there was lots of squealing and cheering.  i may or may not have participated. 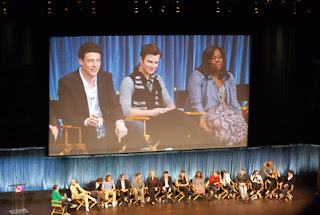 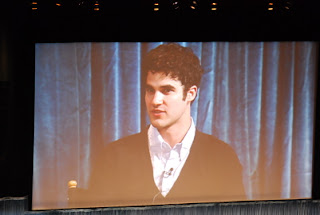 because i was so excited, a ton of my pictures ended up super blurry.  so sad.  but here's a few that i managed not to screw up. 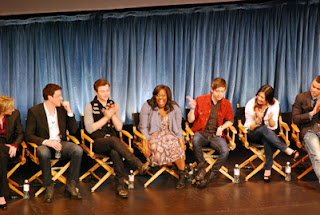 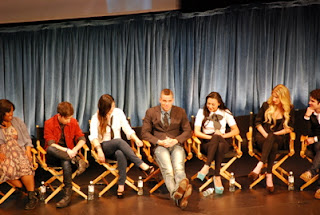 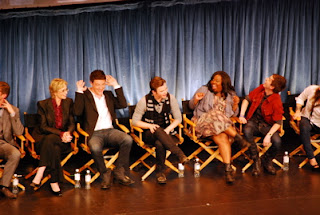 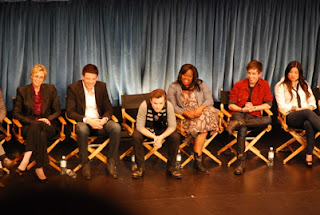 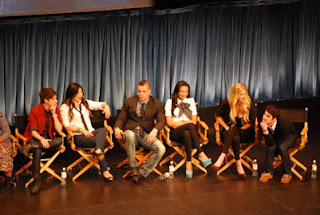 it was kind of surreal to be in the saban theater (well, again) merely a day after the episode that was filmed there was aired.  i'd tried like hell to get a spot in the audience for the "regionals" taping, but was unsuccessful this year.  figures.  remember when i could've gone last year and didn't?  i guess the glee gods just weren't smiling down on me this time around.

anyway, it was fun to watch the cast and creative crew banter back and forth and share little tidbits of what it's like to produce the show.  i thought matthew morrison (will, of course) seemed more personable and friendly this year, and was sad to see that dianna agron (quinn), chord overstreet (sam), jayma mays (emma), and jessalyn gilsig (terri) weren't able to join the group.  and like last year, i wasn't surprised that lea michele (rachel) was too busy to hang out.  apparently, she was in NYC filming "new year's eve" - the sequel to last year's "valentine's day."  psh, whatever.

i'm thinking that the spoilers we got to hear firsthand have already been covered by a gazillion blogs and reporters, but here's a few anyway:

it was over all too soon. 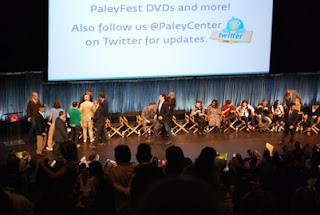 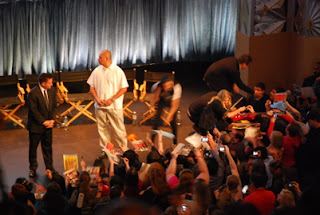 being a school night, we weren't able to linger or even stop for dinner at our beloved versailles.  so sad.  and the teen was so zonked after a long day that she didn't even want to drive.  instead, she passed out as we made our way home.