yesterday, i packed the bean some lunch before picking her up from school.  she and MIL had a good, long list of various local parks that they visited regularly, and i thought it would be fun for her to munch on some grub while playing on the swings and slides.

plus, it gets her nice and tired and ready for her afternoon nap.  hey, i never said i didn't have an ulterior motive.  i've got a bridal shower to put together for this weekend and i have a to-do list a mile long.

anyway, we headed to a playground we've been to quite a few times before.  we used to live around the corner from it, and so it's familiar to both of us.  when we got there, there were quite a few kids already there.  i forgot that our local school district has spring break this week (including the teen, who sadly is at her dad's for the whole vacay), but the bean is pretty good at handling herself when there are lots of others around.

i got us settled at one of the picnic tables at the edge of the playground while she got started on climbing and all that good stuff.  she came over to take a bite and a sip of juice, and then asked me to come with her to play.

there was a little girl on the equipment she chose to play on, and she told me "i'm gonna ask her what her name is."  yet one more thing i'm grateful to MIL for - she taught her to start a conversation and be friendly whenever she sees other kids.  i heard her go up to the girl and say "hi, what's your name?" only to be completely ignored.  so she tried again:  "hi, my name is bean.  what's your name?" and this time the girl looked at her and said "i don't like you and i don't want to talk to you."  she turned around, ushered her little toddler brother along, and walked away.

the bean came back to me and said "she went away, mommy.  i'm gonna go slide."

after a few more trips back and forth to eat and play, we headed over to the little kids' section of the park, where she came upon two little girls who were playing with shovels.  i saw her go over, stand back and watch them quietly, and the girls glanced at her, grabbed their toys, and run to their mother.  i overheard her tell them "you can share, it's okay if other kids want to play with you," and turned back to her magazine.

those girls came back over, where the bean had moved on to something else, looked at her again, and went on playing together.  the bean was singing to herself, and they glanced at her again, giggled, and began to mock her made-up song.  i was furious, but sucked it up and told her "come on babe, wanna go swing some more?" and we walked away from those little brats.

what the hell?!?  i couldn't believe how awful these kids were being to her.  they were all a little older - maybe 6 or so - and yeah, i know how mean kids can be.  but seriously, she didn't do anything offensive aside from ask their names or simply be there.  what little bitchcakes.  i seriously wanted to slap them all across the head.  i mean, look at this face: 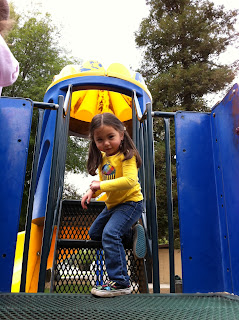 thank goodness she's still little and totally oblivious.  the snubbing went right over her head.  as we packed up our stuff and headed back to the car, she looked up at me with a smile and said "i had fun today, mommy.  i like people."

Email ThisBlogThis!Share to TwitterShare to FacebookShare to Pinterest
Labels: mean girls, playing at the park