i'm kind of a creep

do you remember my post about local (and now a new york times bestselling) author, matt logelin (although i learned that the term "creep" is kind of reserved for a group of ladies who have been matt's support group for the last few years)?  i was able to attend the book signing at my friend's shop, and i dragged the bean and the teen with me with the promise of heading to the grove/farmers market afterwards.

warning:  this is a rather lengthy post (even for me), but trust me - it'll be worth it to read all the way through.  really!

when we arrived, i was stoked to find a sweet parking spot right in front.  and even better?  the meter was broken, and i didn't have to drop any coinage into it! 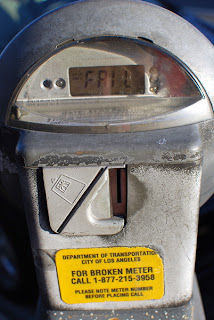 we were a little early, but as we walked in i spotted matt right away.  and because i've been reading his blog and am a total fangirl, i was feeling really shy about approaching him.

but i managed to suck it up and go over to say hello.  he was super laid-back and casual - "hi, i'm matt, thanks for coming out!" and just a really nice, friendly guy.  he was also chatting with a couple of other earlybirds, and i went back to the girls to get them settled at a table near the front.  there was a nice, big promotional poster near the door and some light refreshments set up on the counter. 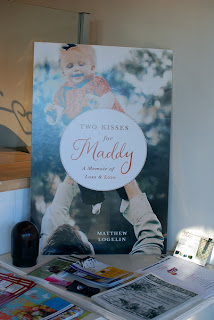 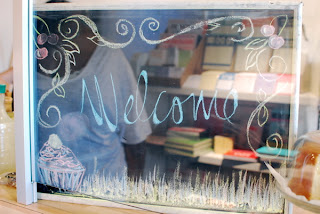 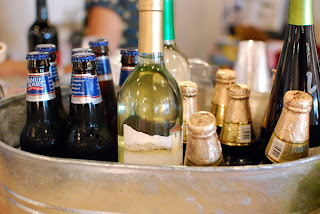 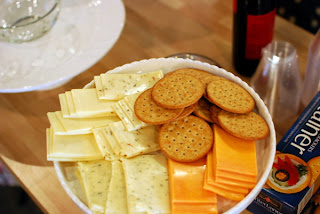 i rejoined the group to listen to the chatter, managed to introduce myself to the others, and watched as matt did his very first book signing. 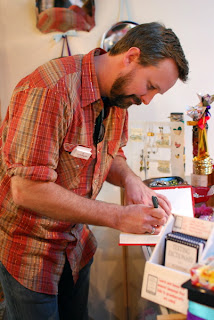 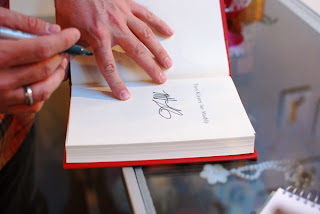 he was nice enough to pose for a couple of pictures with us, too.  the first one is with my new friend (an aspiring actress and a co-creator of an upcoming documentary about twitter), jen levin. 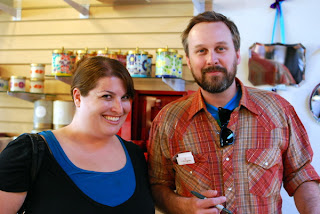 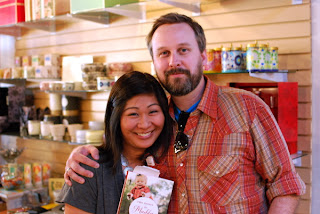 there were special tickets for those who'd bought the book during the shop's presale, in case there was a long line to meet matt. 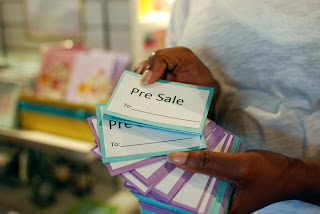 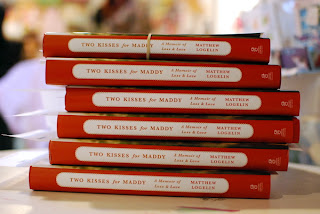 in no time, the floor was full to overflowing with lots of folks who'd come for the signing. 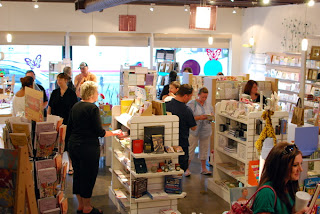 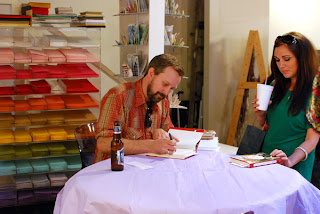 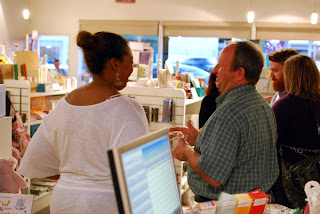 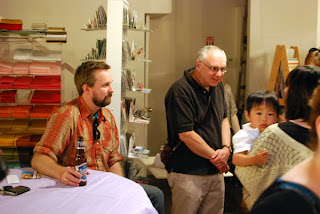 i dig the special cameo appearance by the bean in this shot. 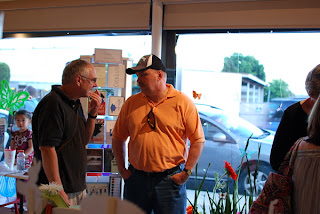 we hung out for a while, and i got a few shots of the bean as she wandered around the shop.  there'd been an in-store event featuring the easter bunny a couple of weeks ago, and she liked the decorations that remained. 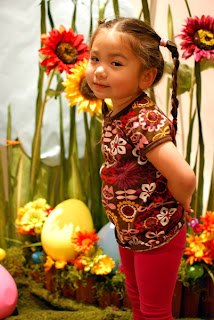 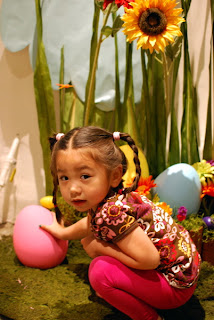 before we left we stopped to say goodbye to matt, who gave us a hug and even invited us to his daughter maddy's birthday party the following day.  i'd mentioned that we had a mutual friend in nanette, so that must've proven our non-stalkerness.  heh.  although i'd already promised the teen i'd take her to meet up with friends at the beach, and so he suggested a playdate with all the kids after he returns home from his whirlwind month of book touring.  maddy and the bean are only a few months apart and would probably have a great time together, along with nanette's em and other friends too.

a week after this signing, matt had another local appearance - one much closer to home for me and that i ended up attending with my friends kelley and dailygluttony.  i totally felt like a stalker, but it was fun to hang out with the girls and have dinner together afterwards.  we met here (forgive me for the awful photos, but i used my camera because my DSLR would've just proven my creepiness): 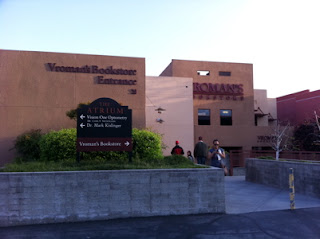 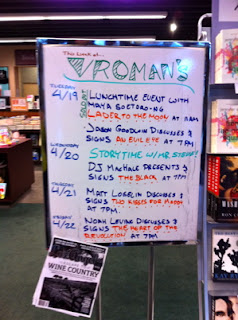 found our way to the signing upstairs: 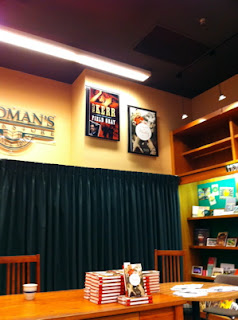 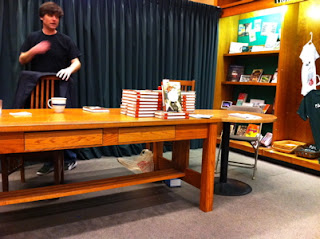 listened (and teared up) to matt read from the book he'd written, which had just hit the new york times bestsellers' list - yay! 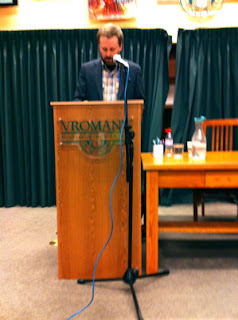 we were sitting in the first row (because no one else seemed to want to, and i have no shame), so we managed to get to the very front of the line, which seemed to grow before our very eyes. 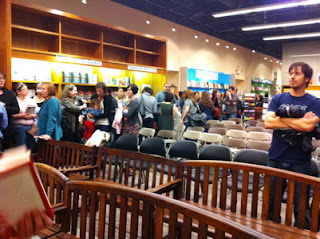 it was nice to finally meet matt's girlfriend, brooke (i'd seen her at the first signing, but felt so stalkerish approaching her) and sweet little maddy.  she is adorable, and looks so much like her mother.  brooke was super nice too, and i really liked her. 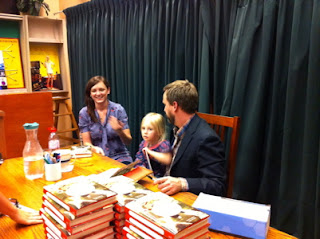 by the way, now i know what it feels like to be on the other end of "i don't want to sound like a stalker, but..."  ha!  and i also told her how much i liked her interview that had just been published online.  matt's blog doesn't really go into detail about her, and it was nice to hear a bit from her perspective.

ooh!  during this signing, i also managed to de-creepify myself with another blogger i've admired for a long time (and wrote about once, after a tragic loss she and her husband suffered).  and again, nanette was the key.

while we were hanging out at the signing, we spied an adorable baby girl with brown curly hair pulled up into pigtails that we squealed over.  she was being held by her dad, who looked really familiar to me - except that i couldn't remember why.  and when they walked away, i mentioned it to the girls and kelley stage-whispered "they're the spohrs."

duh.  i felt so dumb for not realizing it right away.  and i totally debated for a little while whether or not to approach them and introduce myself.  kelley and DG egged me on, and after thinking that nanette would totally make fun of me for not doing so, i walked up and stammered out an introduction.  i dropped nanette's name, which was magical once again, and heather smiled and gave me a hug.  she and her husband mike were so nice, and although i was all sweaty and nervous, i was glad i hadn't passed up the chance to meet them.

i know.  i'm a royal dork.  you already knew that.

so anyway, i finished reading the book last week.  it's a fantastic book that tells a heartbreaking, tearjerker of a story - but i can't recommend it highly enough.  yeah, it's super sad and it will make you cry.  at least, if you have a heart.  and in fact, i'm volunteering to host the next book club so that i can make the girls read it, although i think a lot of them already have or are planning to.  the awesome twist is that matt and i are working on coordinating our calendars so that he can come, too.  it will be an epic book club gathering.

oh, and since i attended two signings, i've got an extra signed copy of two kisses for maddy - and because i'm cool like that, i'm gonna give it to one of YOU.  as with past giveaways, i'll be choosing a winner with my buddy random.org - which means all you have to do to enter is to leave me some comment love.  plus, i'll give you another entry if you tweet a link to this post and mention me (@luvbabyb) in the tweet.  i'll do the drawing on friday - so make sure you enter by 8PM PST, and i'll post the winner next monday.

what can i say?  i like comments.  and it seems to me that a signed copy of a current bestseller is the least i can do since you just spent a few minutes of your life that you'll never get back reading this post.
at April 25, 2011