i've been getting up early this week to make sure that the hub has coffee, the girls have something for breakfast, and the teen has grub to take for lunch.

the quasi-sleep training we've been doing with the bean has been helpful in this regard, sort of.  operation big girl bed is in full effect, and it's been rough but i'm determined to stick with it.  i manage to get her asleep, put her in her bed, and get a few hours of sleep.  the first few nights, she'd wake up around midnight or 1 crying, and because i can't stand to hear her sob, i get up and comfort her.  before, i'd let myself get sucked in and crawl into bed with her to get her back to sleep.  of course, this meant i'd end up sleeping for the rest of the night in her bed.  totally not the point of this exercise.

so i've been priming her during the day.  "when you wake up and it's still dark outside, you don't need to cry.  just hug mickey (or whoever she's decided to take to bed that night), close your eyes and go back to sleep."  and this works well, while we're all awake.  when she wakes up at some ungodly hour, not so much - she starts wailing and if i don't come into her room, the "moooooommmmmy!"s start up.  talk about a shot to the heart.  i go in and comfort her till she falls back asleep and tiptoe out.  but i know she has to learn to soothe herself back to la-la land.

anyway, this morning, when she woke up crying at 4 (a nice long stretch of sleep!), i went in, rubbed her back, tucked her back in, told her she didn't need to cry, and we made a deal.  "go back to sleep, and when you wake up and the sun is out, i really need you to come in and make sure i'm awake too, okay?"  i got a watery smile and a nod, gave her another hug and a kiss, and walked out before she was back to sleep.

and it worked!  as i was making breakfast this morning around 7, i looked up and she was walking sleepily into the kitchen with a little smile.  i told her how proud i was of her for sleeping in her own bed like a big girl, and she grinned with pride.  let's hope it continues.

so anyway, earlier this week i came across a recipe for monkey bread in a mason jar.  i thought this would make for a fun breakfast, one that the teen could stick in her bag and take to school.  i even have the right size of jars in the cupboard, but i realized that baking bread in a glass jar with a metal lid...probably not the greatest idea in the world for my purposes.

instead, i made the recipe (super easy, with ready-made biscuit dough, although i added a little melted butter to make sure the sugars stuck to the dough) and divided the pieces into a bunch of cupcake liners. 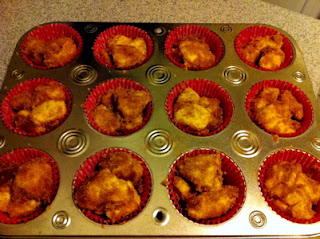 i popped it into the oven, and about 15 minutes later, it was done.  but i decided i needed to add a little something and whipped up a quick little glaze for the tops. 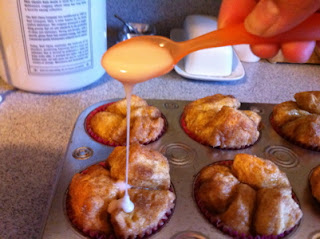 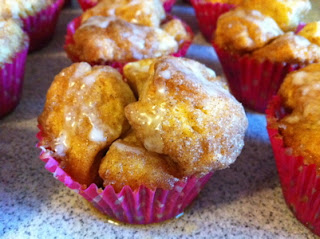 it turned out really yummy, and everyone dug it.  especially the bean, who happily ate it for breakfast three days straight. 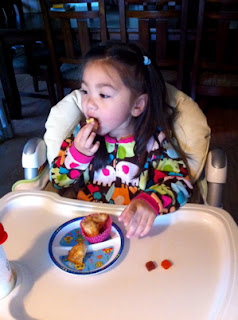 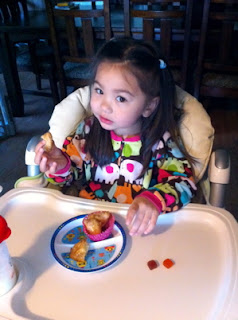 remember that recipe for pancake cupcakes that i mentioned a couple of weeks ago?  well, i finally decided to give it a try.  i'd made another batch of maple bacon a few days ago and saved some of it in the fridge just for this.  i got up early this morning, chopped up the bacon, mixed up the batter, and folded the bacon carefully into the mix.  it took a little longer to bake completely than it said in the recipe, but about 16 minutes later, voila: 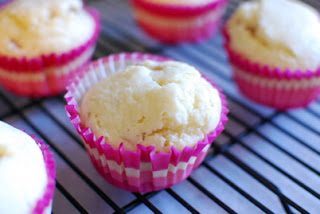 because i didn't want to make the buttercream frosting, i decided to wing it again with a glaze.  i mixed up some powdered sugar with maple syrup and a little vanilla extract and drizzled it on top. 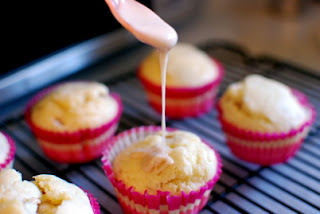 i'd saved one slice of bacon that i chopped up really finely, and topped the cupcakes with a happy sprinkle.  looks pretty good, yeah? 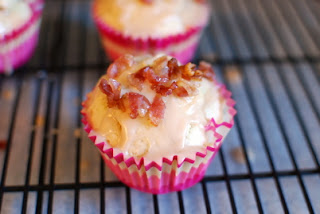 i sent the teen to school with one, texted her a little later to ask if she'd liked it, and got "it was deff delish."  woo-hoo!  and she was right - these are really good. 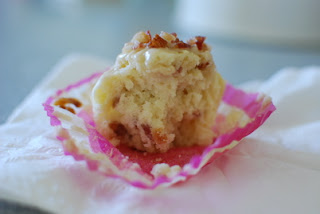 i think they may be pretty good competition for a local cupcakery whose claim to fame is the breakfast cupcake - basically the same as this, except that theirs is a buttermilk cake instead of pancake batter.  i've tried it and without sounding like i'm totally tootin' my own horn over here...i liked mine better.

edited to add:  for the monkey bread, i cut each biscuit into six pieces and put about five into each cupcake liner.  as for the pancake cupcakes, i cut the recipe in half but still used the same amount of sugar (1 tablespoon...maybe a little extra.  heh) because i wasn't going to make the frosting.  it turned out really good this way.
at April 01, 2011