the hub has an iBirthday

so the hub's birthday was this weekend.

before she left, MIL and i had placed an order online for a joint birthday present.  i'd actually been saving for a while in an effort to buy it myself, but when she heard about it she asked if she and FIL could chip in for it.  and since it was rather pricey and i actually hadn't saved quite enough, hey...

and what was this very special present that had me saving my pennies for months?  well, something that the hub would never, ever buy for himself.  and yet i'd caught him perusing the website for it quite a few times. something so in demand that it took several weeks for it to be delivered, arriving a mere two days before i needed it: 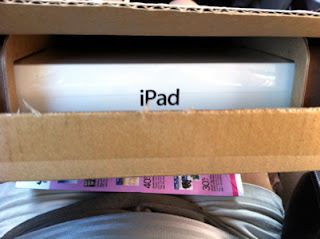 i'd ordered it the very day it came out - march 11th.  and when i got the e-mail confirmation of my order, it said that it wasn't even scheduled to even be shipped out until april 1st, leaving me in quite a pickle.  although i'd ordered a smart cover to go with it, which i'd received about a week later.  i figured i could just give him that on his actual birthday, and then the iPad would arrive a few days after that.

and then last weekend i got the shipment confirmation e-mail.  the thing was coming from china to hong kong to alaska to oakland, and finally to los angeles.  i was skeptical about it actually getting here on time, but as i tracked that shipment online like a madwoman, fedex came through and i happily stopped at the mailbox to pick it up.

i'm awful at keeping secrets.  especially when it's about a great present that i'm dying to give.  i just love seeing the reaction it gets, particularly when i know for damn sure it's coming way outta left field.  so i'd been practically bursting at the seams for the last several weeks, so ready for april 2nd to roll around so i could finally give my husband the gift he'd never see coming.

the teen had seen him looking at the iPad website a few times herself, and she said "mom, what if he just goes crazy and decides to buy it?  he was looking at it at best buy when we went!"  but i knew better:  "he won't.  he'd buy it for someone else before he'd spend the money on himself."

it was so fun to watch him open it when the bean handed the brightly wrapped box to him.  he was really surprised, and when i asked him what he thought it might have been, "a book" was his answer.  at first, he tried to tell me he'd take mine and i could have the new one, but no way.  sure, i'd love to have a fun new toy with cameras and FaceTime and all that stuff, but it wasn't MY birthday. 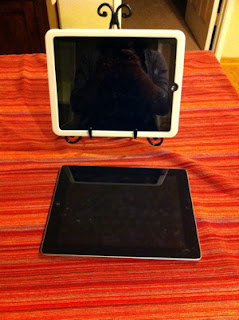 and now i won't have to wait my turn to play with mine anymore.  muahahahahahaha!
at April 05, 2011

Email ThisBlogThis!Share to TwitterShare to FacebookShare to Pinterest
Labels: surprise gifts are fun