so a couple of weeks ago, an old friend from my time on the knot posted on facebook that she was looking for some buddies to go and try out for a new trivia game show on NBC.

i love trivia.  i'm chock-full of useless knowledge that my brain has decided to retain for some unknown reason.

i've tried out for exactly three game shows in my whole life.  when i was about 8, there was a kid's version of an old game show called "the joker's wild" that my family loved.  my family saw the ad for "joker joker joker" and decided that i was the perfect candidate for that show, and off we went for an audition.

have i ever shown you how homely i was when i was that age?  it's just sad.  so no, i didn't get a callback.

the next show i tried out for was much bigger and more well-known - "wheel of fortune."  they'd announced a search for contestants to play alongside actors from several soap operas - including "general hospital."  we all know how much i love that show, and the actor reppin' it for "wheel" was super hottie ingo rademacher, who plays "jax" (and still does, a bazillion years later).  i hopped right on that train, managed to get myself an audition, got through the first few cuts, but lost out to this ridiculously loud and obnoxious woman who would have probably swallowed me whole.  although i realize this is the type of personality they typically look for, right?  oh, well.  she ended up losing the game.  ha!
Post Options
lastly, the ex and i went out for a show called "supermarket sweep."  i don't think it really lasted very long, but i think a lot of people watched it.  anyway, we acted the fool, jumped around and high-fived and cheered and everything (a major feat with the ex, lemme tell you.  we really needed the money), but still didn't get called in for a taping.  bah!

with my history of game show audition failures, i went into this one with very low expectations.  i tend to do that to myself so as not to be too disappointed when stuff doesn't work out.  at the very least, i figured i would have some fun, especially since i got my friend jess a spot in the tryout too.  yay, a buddy!

lucky for me, the hub had one of those very rare free afternoons, and so the bean and i hopped into his car, we picked up the teen and rock-ell from school, and headed down to hollywood.  the studio was easy to find, and the lineup for the audition even more so. 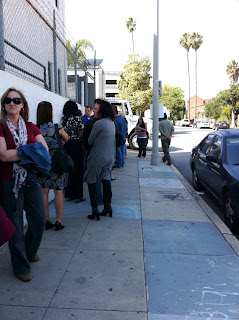 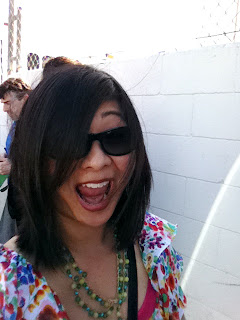 after trading a couple of text messages with jess, she joined me in the line just as the production staff was beginning to hand out questionnaires to fill out. 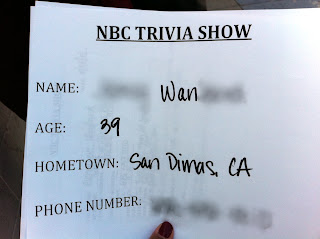 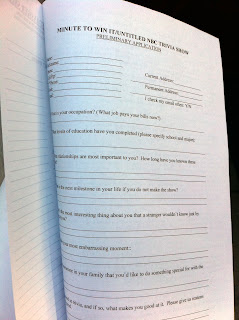 it's pretty sad when you can't think of anything interesting to say about yourself.  i was completely stumped on that question, as well as the one asking for my most embarrassing moments.  obviously, i've had many, but for the life of me couldn't think of a single one.  wanna hear something super lame?  i even whipped out my phone and searched this blog for the word "embarrass."

i came up with nothing, by the way.  good gracious.

anyway, i managed to scrawl some dumb story on those lines and by the time i was done, they were moving us inside. 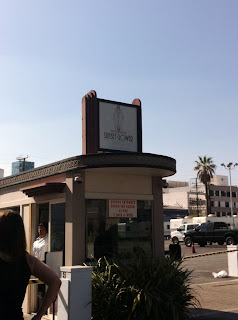 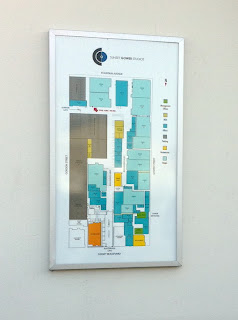 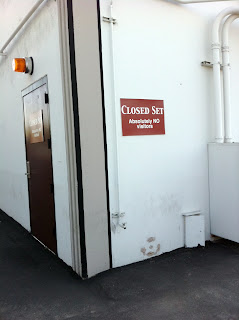 we were led into a large dungeon-like room in a basement somewhere, and jess and i smirked at each other as we listened to the people around us discussing the numerous game shows they'd either been on or auditioned for.  these were professional contestants, man.  for serious.

inside, we were greeted by the casting director for the show.  dude was pretty hot.  this was the best shot i managed to finagle without making a spectacle of myself (obviously, it's the one standing up, not the dude in the solid blue shirt). 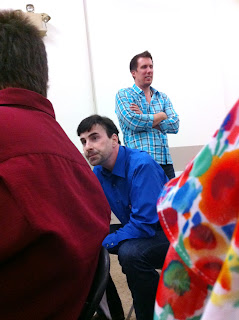 huh.  he doesn't look that great in that picture, but trust me - jess agreed, he was pretty easy on the eyes.

we were shown a quick clip of the game show we were trying out for - working title "still standing."  basically, one contestant goes head-to-head against ten others, answering trivia questions in various subjects.  when you miss a question, you literally fall through a hole right beneath your feet.  i can't lie, i kind of want to get onto the show just to get dropped through the floor.  i pictured an elaborate willy wonka-style system of chutes underground or something super realistic like that.  heh.

next, we were given a 30-question trivia test, which included stuff like "what was the name of the family on the tv show "roseanne"?" and "which president appears first on mount rushmore?" and "which pop star did ke$ha write the single "till the world ends" for?"  i was pretty confident in most of my answers, but didn't even have a guess at about three of them.  if you quiz me on anything harry potter, lord of the rings, or star wars, i'm screwed.  same goes with a lot of political stuff.  i'm not that deep, yo.

the staff gathered up the test sheets, graded them with superhuman speed, and then sent about half of the group outside.  i'm assuming those were the ones who didn't answer enough of the questions correctly.  as we looked around at who was left in the room, it was obvious that most of us were, uh...older than the ones who left.  yeah. 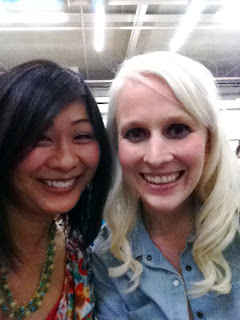 they divided us into three groups (i was separated from jess at this point, who is a much more interesting gal than i am), and then we introduced ourselves and shared a little tidbit about our lives.  and dudes, i should've prepared for something like that.  seriously, i have a pretty boring life (even though it's pretty fantastic to me) - i'm happily married and just quit a job selling cupcakes to be a SAHM to a teen and a toddler.  pretty blah compared to the chick next to me who was in her residency at huntington memorial hospital, $300K in debt, newly engaged to a brand-new lawyer who's $500K in debt, and trying to plan a wedding with no money to speak of.  or the lady next to me who'd just up and moved to california from the midwest, lost her job, has an 18-month old and is trying to crawl out of the mountain of debt she and her husband owe.

when we were all done, they led us outside and through the studio grounds to another building where we all stood around and shot the shit while we waited for our names to be called.  oh - and here's a few of those professional contestants.  the dude in red has been on so many game shows already that he's actually ineligible to try out for some of the more popular ones, like "wheel" and "jeopardy."  geez. 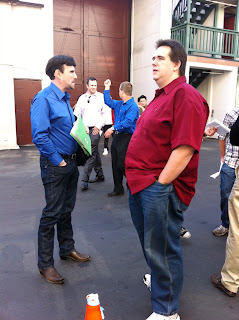 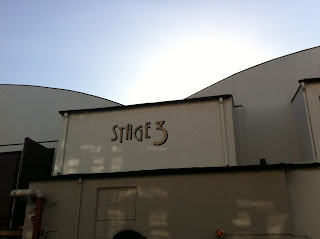 finally, my name was called with a group of about five others.  we went inside, where we had a headshot taken, and waited some more. 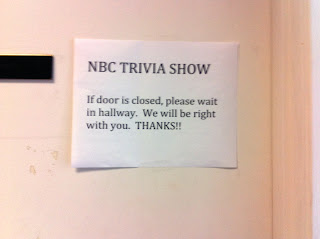 the wait wasn't too long this time.  through the door, we were asked to hold up the sheet with our info on it in front of the camera, give our name, age, and where we were from, and answer a few personal questions.  while i did mine, i found out that i scored higher in my trivia test than most PhDs and MBAs, although i'm thinking he threw that in because my questionnaire told him i never went any higher education-wise than high school.  heh.  i was at my peppiest, smiley-est best in the hopes of regaining ground i'd lost with my boring life. and managed to answer my trivia questions in front of the camera correctly.

with a "okay, if we need you we'll call you by june," we were dismissed.  i called the hub, who was taking the girls on a drive around hollywood, and ended up waiting just inside the gate.  i didn't want to go back out where i'd been dropped off - i'd learned that some homeless dude had physically threatened a few of the people at the front of the line when we were waiting to get in.  i wasn't about to get shanked as i stood there all by myself.  the security guard was really friendly and told me i was welcome to wait right there. 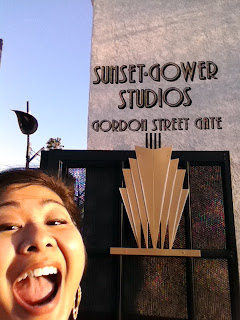 the hub and the girls had also gone to the grove to kill some time, where the teen and rock-ell came across a photo op with "the biggest loser"'s jillian michaels (also the relentless dictator who came up with the 30-day shred, which i hate). 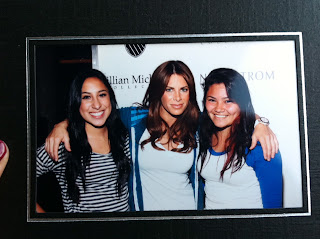 i had a groupon-esque deal that was about to expire for bld restaurant, so that's where we had dinner. 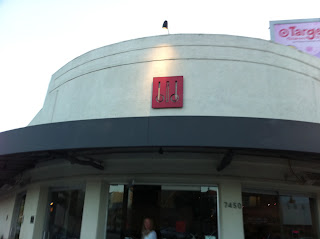 Email ThisBlogThis!Share to TwitterShare to FacebookShare to Pinterest
Labels: game shows are fun, i wan-na be famous