so who's been watching jamie oliver's food revolution?  come on, 'fess up.

it's totally entertaining, right?  and infuriating at the same time.  the teen has never been one to eat the food in school cafeterias.  it always grossed her out, and she much preferred bringing her own grub (especially during her year of vegetarianism).  so i never had to deal with how awful the food is at school, but i think it's awful that the school district officials are in such denial (or just don't want to make any changes due to budget or laziness or whatnot).

none of this has anything to do with today's post.  heh.  it's a long, roundabout way of saying that i found this at the library and checked it out immediately: 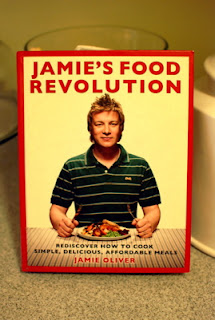 the book has nothing to do with school cafeterias or the show in general.  it's really more about teaching average folks who may or may not have any cooking experience how easy it is to throw together a good meal from basic, fresh ingredients.  a lot of the items in the recipes are probably in your kitchen right now, and just waiting to be prepared into something super delicious.

i liked the simplicity of the recipes, and decided to try a pasta dish for dinner.  i already had everything i needed without having to take a trip to the grocery store, which was pretty awesome. 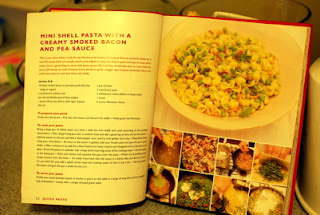 and, well, it started off with my most favorite ingredient on the planet - bacon, of course. 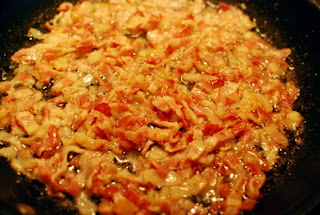 i strayed away a little to add some sauteed mushrooms and replaced the peas (which i despise with the fire of a thousand and one suns) with some shelled edamame.  still healthy and added the color needed in the dish: 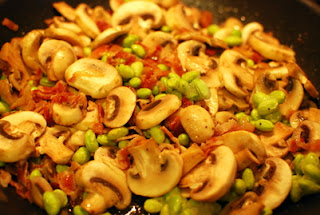 i didn't have any mini shell pasta on hand, but i did find a box of whole wheat animal shapes that i'd obviously picked up with the bean in mind.  sadly, she had zero interest in trying it even with the novelty of the hippos and such in the mix. 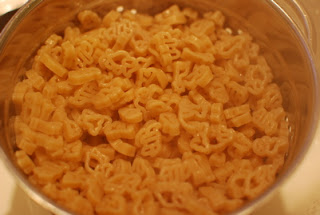 it was pretty easy to prepare, and it was actually really good.  we ended up with a ton of the stuff, which i ate for lunch a couple of days afterwards. 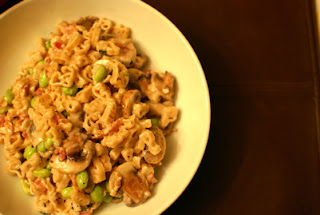 when the teen came home, i decided to try another recipe - this time, for a yummy bolognese sauce. 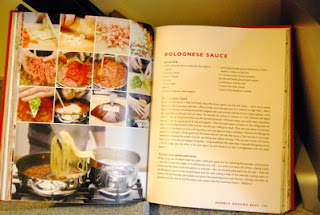 again, it began with the best meat ever: 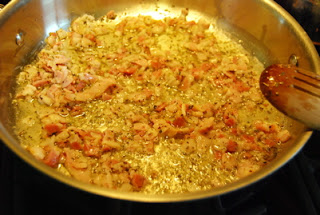 and the colors in this photo are really bizarre, but it's the only shot of the chopped bacon, carrot, garlic, and celery i got.  deal with it. 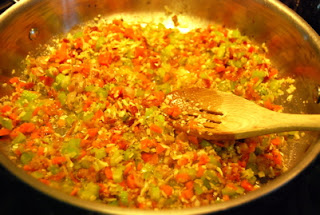 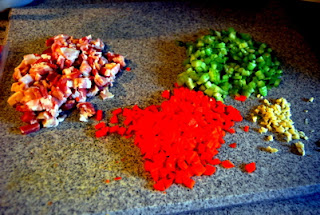 following the directions as written, i ended up with a thin sauce that carried an odd hue.  of course, this simply wouldn't do.  i didn't love the way the diced tomatoes just kind of sat there, so i pulled out the ol' food processor and gave the hot sauce a whirl.  when i poured it back into the pot, i added a can of tomato paste and the parmesan cheese, and it looked much better. 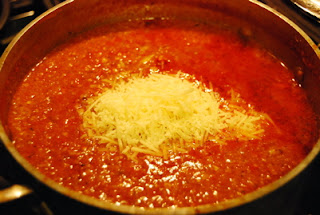 tossing the cooked noodles in half of the sauce and then topping each serving with more sauce made it look really scrumptious. 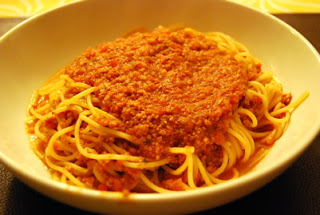 final verdict?  well, don't get me wrong - it was good and we all enjoyed it.  but as the teen said, it really didn't taste much different from the easy peasy sauce i usually make.  this had taken me the better part of two hours to make, counting the veggie chopping and sauteing, and my go-to sauce is always ready in a mere 45 minutes.

oh, well.  there are lots more recipes in there that i want to try before i have to return the book to the library.  or maybe i'll just pick up a copy of the book at the bookstore.  we'll see.
at April 29, 2011

Email ThisBlogThis!Share to TwitterShare to FacebookShare to Pinterest
Labels: adventures in cooking, reality tv for the win