cashing in a prize

well, not me.  remember my first cookie giveaway (that was a comment recordbreaker!) ?  cara, my winner, deferred her prize for a few weeks so that she could bring the cookies to a wedding shower she's attending this weekend.  and so after trading a few emails, i finally got to put her winnings in the mail.

the shower invitation was in green with a daisy theme.  simple, but pretty.  so i figured it would be best to just follow its lead and do green daisy cookies.  now, at this point, i had gotten it mixed up and thought it was a baby shower.  i was all set to do cute little baby faces as the centers of the cookies and was going to try making them ahead of time like the letters on the "due in october" cake pops.  thank goodness i went back and double-checked the details...that would have been pretty bad to be giving out baby themed cookies.  imagine the confusion i would've caused?  yikes.

mixing, rolling, cutting, and baking the cookies is practically like second nature to me by now.  as for the royal icing, i decided to use up the remaining mix i'd bought for those letters.

this would prove to be a move i completely regretted.  oy.  why i didn't just stick to my usual recipe, i don't know.  well, yeah, i do.  the mix was super easy, and i let my laziness get in the way.  never again.

it seemed okay at first.  i only had to mix two colors - different shades of green.  i outlined and flooded the cookies in the lighter color. 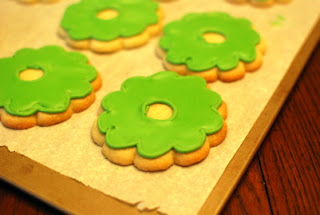 after giving them some time to dry a bit, i went back over them and outlined the petals in the darker shade. 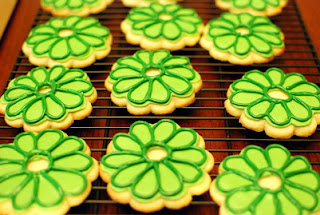 so far, so good, right?  but then i mixed up a bit more of that royal icing mix to make the white centers and started filling them in. 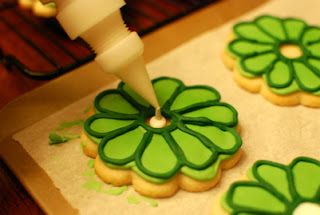 still no biggie, right?  except that when i finished the last cookie and went back to check on my handiwork, i realized that the white icing was too thin.  it was bleeding out of the center and onto the petals.  hell and dalmatians. 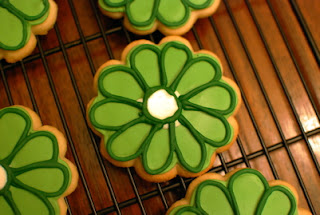 i didn't have time to redo them, so i just had to go with them.  i decorated the rest of the cookies i'd had to ignore when i ran out of light green icing and started cleaning up. 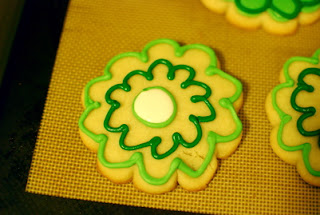 but i had a little dark green icing left.  i decided to play a little and see if i could make something work. 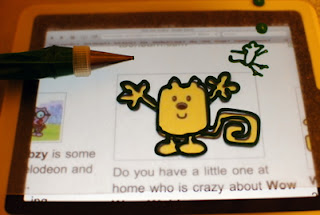 heh.  i'm such a cheater - but i was all excited to find a new way to make fun royal icing transfers, plus a new use for that iPad.  woohoo!

and then the next morning, i wanted to throw those cookies out the window.  not only had a lot of them bled in the middle, but those damned centers cracked. 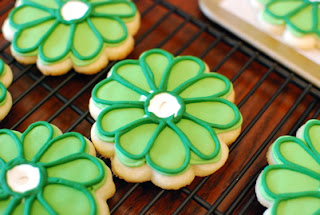 so angry.  so, so, pissed.  but again, i had no choice but to continue on.  i wrapped them in cellophane bags, tied them with green satin ribbon, packed them carefully in a box with a ton of tissue, and shot cara an e-mail to give her the heads-up. 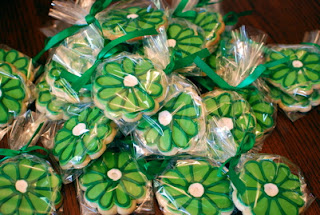 they look nicer all dressed up, though.  and when i sent cara a few pictures, she didn't seem to mind the imperfections that were completely stressing me out.  lest you wonder why i was so freaked out, you should know that she ordered an extra dozen cookies from me in addition to the free dozen she'd won.  so not only had i fucked up her prize, but she was paying for half of them.

but i decided that no way was i going to charge her for these things.  nuh-uh.  and when she found out, here's how sweet she is - she not only covered my shipping charges but threw in some extra bucks anyway.  thank you, cara.  you're awesome!  i just hope you doesn't regret that when the box arrives and you get to see the cookies up close and personal.  bah!

so, the moral of this story:  don't stray from a tried-and-true recipe.  especially when it's not just for fun.  lesson learned!
at March 31, 2011