i was super stoked to receive an email earlier this week from a friend who's expecting her first baby.  she was hoping i could help her out in delivering the news to her ILs in a sweet way.  and with her husband's birthday and their wedding anniversary in the very same week, we decided to skip the obvious sugar cookie idea and went for cake pops instead.

after going back and forth a bit on details, we settled on purple and gold - she's due in the fall, and her husband is a big lakers fan.  because, duh, who isn't (don't answer that)?  heh.

i've been wanting to try making royal icing transfers, but never really had a reason to until now.  and even these are rather primitive - i really don't have fantastic penmanship, but even i can't screw up simple block letters.  but i wasn't in the mood to whip up an entire batch of royal icing, since i don't have anything to use it on just yet, so i hit my favorite supply store and bought a couple of bags of royal icing mix - just add water.

the dilemma i faced then was that the entire bag is meant to be mixed up at once.  but i figured, i have a good idea of what kind of consistency the stuff needs to have by now.  so i opened the bag, measured out about a half cup of the powder, and added a teaspoonful of water at a time until it looked right.  i added a few drops of "gold" and "lemon yellow" gel coloring, scraped it into a pastry bag with a writing tip attached to it, and voila: 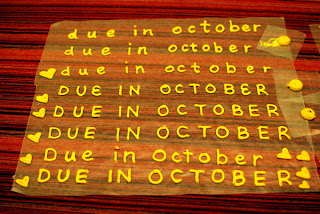 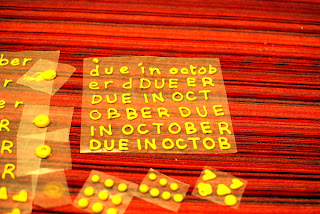 i made so many because, well, i actually had quite a bit of icing in the bag, and besides - i'm a klutz.  i wanted to be completely prepared, in case i broke any of the letters as i worked with them.  plus, i got to get the feel for the bag and the tip and really try to make the lettering nice.  and when i got tired of repeating myself (it was like getting busted at school and having to do standards, sort of), i made some dots and hearts and even an attempt at some roses with a different tip.  but my icing was just a little too runny, and my roses ended up looking like big ol' blobs.  oh, well.  i'll try again soon.

red velvet was the requested flavor, so i took a recipe i found online, cut it in half, and did the same with the frosting.  after the cake had completely cooled, i mixed it up and made up the balls.  the mixture was a little bit gooier than i'm used to - i guess that's what happens when you totally wing the measurements - so i put them in the freezer to firm up.

an hour later, they were much better. 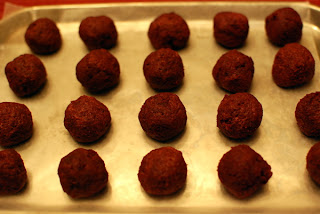 i was afraid that the coating would crack like the last time i made cake balls, so i let them come up almost to room temperature - a trick i found on a site somewhere.  but when i did that, they fell right off the damn stick when i dipped them in the purple candy.  i don't have pictures because i was too busy muttering every curse word i know at the poor things.  twice.

so anyway, i ended up putting them back in the freezer and pulling them out one at a time to work with.  i did the first one, stuck a letter on, and decided it was too plain-looking.  so i went into the pantry and miraculously found some purple sprinkles - it's amazing what treasures are in that cupboard.  you can see the plain "D" in the background here: 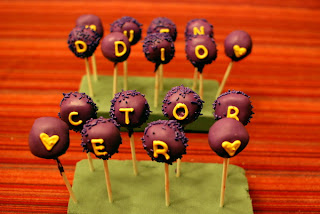 the only problem with working with cold cake balls was that the candy hardened fast.  like, way too fast.  i had to scramble to tap off the excess candy, stick the letter on, and get those sprinkles on before it was too late.  in some cases, there were less sprinkles than on others.  but they looked happy and festive, and i think they turned out well. 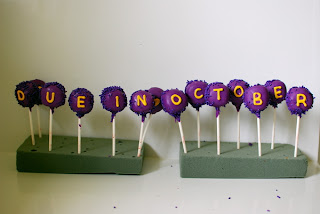 i might have tried one of the rejects (you know, the ones that fell off of the sticks and were totally imperfect), just to make sure they were tasty and up to my standards.  they were, by the way.

and my friend was pleased with them when i dropped them off.  i managed to cram them into the floral foam and find a box that they all fit into - and even closed!  bonus! 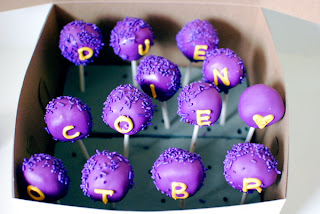 so much fun.  she's going to present them at lunchtime today, so i'm excited for her.  i love that she enlisted my help in such a happy occasion!
at March 25, 2011