it's so hard to say goodbye

MIL left this weekend - actually, a day later than originally planned as her traveling companions (the grandparents) caught the flu last week and needed a little extra time to get themselves back to 100%.  i was selfishly grateful for that unexpected bit of extra time.  is that wrong?  heh.

she and i have had a really special relationship.  from the very first time the hub brought me to meet his folks, she's been nothing but welcoming and loving towards me and the teen.  considering the fact that her son and i have a significant age difference, not to mention the fact that i was a divorcée with a five-year-old daughter, i was apprehensive as to how i would be received.  and if she had any reservations about us, she sure never showed it.  all she ever did was include us in their family gatherings, treat the teen as her own flesh and blood, and shower us with love every time we saw her.

as the hub and i planned our wedding, she proudly introduced me to everyone she knew as her "daughter in love," and the teen as her granddaughter.  after all, by then, we'd been part of their lives for almost five years, and she'd watched the teen grow from a cute kindergartener and begin the process of blossoming into the beautiful young adult she is today.

it was because of her and FIL that we were able to keep our heads above water during the awful year that was 2009.  they gave up their beloved home in the mountains to come down and move into the grandparents' house (which was supposed to be temporary, but lasted over a year), all to help us and be close enough for MIL to babysit the bean on a daily basis as i worked in the mornings.  with FIL away for business during the week, she said she was happy to have the special bonding time with her younger granddaughter, and she'd sit and chat with me for a while before disappearing to run her own errands or meet up with friends in the afternoons.  i would get home and she and the bean would have just returned from grocery shopping, target, petco, you name it - and the kitchen and bathroom would be fully stocked with supplies.  and, uh, the apartment would be sparkling clean.  heh.

and then as the hub's work situation improved, we started looking at homes that would be big enough for all of us to live in.  we considered only houses with at least four bedrooms, and got really lucky to find the one we're in now.  MIL and FIL used all of their considerable resources to fix up the few things that needed to be done around the house, and we all settled into a comfortable routine.  we'd take turns making dinner, or we'd go out, or she and i would go chase food trucks together.  she was always up for whatever craziness i was thinking of embarking on with the girls, and every day was an adventure.  we just...had fun.  i turned to her whenever i needed a sounding board, some advice, had to vent, desperately needed a taste taster, what have you.  and she would share her frustrations and concerns with me, but she never had a mean word to say about anyone no matter what the situation.  she would laugh it off, look at the bright side, try to find the good in everything.  if i thought i was the eternal optimist, she is most definitely the ultimate one.  she's the most outgoing, friendly person i've ever met, and luckily she's been passing those wonderful traits on to the bean.

FIL first broached the subject of moving to texas for work maybe a year or so ago.  i don't think any of us ever thought it would ever happen, and we just continued to have a blast and do fun stuff as usual.

but then the ball got rolling and all of a sudden, he was gone for two and three weeks at a time, instead of the usual five or six days.  work eventually leased a house for him (cheaper than the hotel rooms he was living in before), and they broke it to us that he was there for a good ten years...with MIL heading out to join him in march.

i was in total denial and tried not to think about it.  she'd turned into one of my best friends, probably the most awesome roommate you can imagine, and the girls were really attached to her as well.  when i was working, she'd often pick up the bean from school and then scoop up some lunch and take it to the teen and her friends at school.  if i ever mentioned something that interested me, or that i thought would be cool for one (or both) of the girls, she would take off and return with it.  she loved to surprise us with fun stuff, and she did it often.

she took off to see FIL over long weekends a few times, and after one of these trips she broke the news that they'd chosen a date for her to go - permanently.  i was crushed, and i was so sad as i thought of how the bean would miss her grandma.  by now, she's been a daily fixture in our lives for two years straight.

we decided to throw a going-away party for her, just a little one with family and friends - but she doesn't love attention.  i asked her for a guest list, and she produced one with only about a dozen names on it.  we fired up the BBQ and had a good time with everyone who showed up, while i tried not to think of the reason for the gathering.  plus, we'd spent her last week home getting her out of the house and doing lots of fun stuff "for the last time."  we had a ball.  and i made these for her: 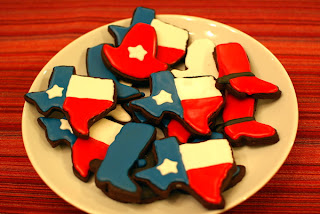 the teen and rock-ell wrote her a sweet letter and decorated a giant goodbye card, while the hub and i filled out a smaller, but just as heartfelt, card of our own.  we left them for her as she got ready for bed on her last night home, and i knew she'd read them as i heard her blowing her nose down the hall.

with the time change this weekend, i made extra sure that we'd all wake up in time to spend a few final moments together and say goodbye.  and as she finally packed all of the last minute things into the car, i tried to stay cheerful and happy.  i watched her pull the teen into her arms, give her a gigantic hug, and saw her eyes well up with tears that she blinked away as she turned to the bean.  it had to be breaking her heart, but she gave bean a bright smile and a big hug.  i'd been trying to prep the bean for this moment, but i knew she didn't fully understand what was happening.  i'm dreading the next couple of weeks as the truth starts to dawn on her and she starts to cry for her beloved grandma.  i totally regret now not taking more pictures of her - she doesn't love being on that end of the camera, and i tried to respect that.  bummer.

and after the huge hug i got (and gave), she turned away and headed towards the car, where the hub was waiting for his own goodbye.  that's when i finally gave in and let my own tears come - i'm crying again just at the memory of it.  we watched her slowly pull out of the driveway, wave at us through her window, blow us kisses, and disappear down the street for the last time.  i went inside and bawled as the teen looked on with teary eyes of her own, and the bean was blessedly oblivious.  the hub gave me a comforting hug, and then i excused myself to go and get ready for the day.

now, i realize that there are much worse things to be dealing with.  the world is in turmoil right now over the devastating earthquake in japan, wars and political unrest everywhere, etc.  i know it.  and it's not like texas is on another planet or anything.  i know they'll be back to visit at least every few months, and we're also hoping to get out there to see them this summer.

but it's just not going to be the same.  the house is a little quieter.  and i keep glancing sadly into the empty space that was her bedroom until this morning.  i'm already missing her ever-present smile, the endless stories, her companionship.

Email ThisBlogThis!Share to TwitterShare to FacebookShare to Pinterest
Labels: not your average MIL