okay, so we all know i'm not the healthiest of eaters.  i really don't eat as many veggies as i should - and most definitely not the five or so servings we're supposed to eat every day.  as with fruit, i typically like the flavors of the stuff...just not the texture of the actual item.  yes, i am weird.

but then i kept reading about homemade kale chips.  a-whaaaa? i kept thinking.  that's that nasty leafy thing that often comes as a garnish of some sort on my plate when we go out to eat.  i pluck it right off and toss it aside.  and people actually eat that stuff?  that's crazy talk.

and then when even jessica of my favorite cooking blog referenced making a batch of these things in one of the zillion posts i read (i actually did get all the way to the very beginning of the blog.  something like two or three years ago), i figured it was worth a try.  after all, she hates veggies, and if she thinks these are tasty, it's gotta be somewhat okay.

i polled my friends on twitter, and my buddy lilcee linked me to a page on one of my other favorite cooking blogs.  i glanced through the directions and wondered if it could really be that easy.  and so on my next trip to the grocery store, i picked up a bunch of kale. 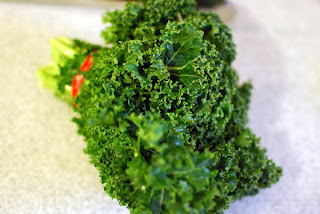 of course, as i posted back and forth with lilcee and then looked at the recipe again, i came to realize that there are lots of different types of kale.  oy vey.  but there was only one kind at albertson's, so i was gonna make it work.

and then i totally lost steam and my kale sat in the crisper drawer in my fridge for a few days.  oops.

plus, jessica had mentioned sprinkling hers with nutritional yeast to add flavor, and if she was doing it, i wanted to, too.  i'm such a sheep.  so after a junior league meeting one evening, i swung by whole foods (the only place i could imagine that would carry such a thing) to pick some up.

except that their selection was rather slim.  their nutritional yeast came in two sizes - huge and humongous.  like, the canisters were the size of a gallon of milk.  and the smaller of the two cost $15.  um, no.

but i really wanted to try it, and ended up walking around the store with it in my hand, debating it in my head as i browsed.  you know me - once i get an idea in my noggin, it nags and nags at me until i finally give in and do whatever it takes.  and then i happened to stumble across the bulk foods section.  i wandered down the aisle, taking note of the various items (whole wheat pastry flour!  almond meal!  tons of other crap i would want one day!), when i found it - nutritional yeast, available for me to scoop into a plastic bag in whatever quantity i wanted.  yessssssss.

so along with my pink sea salt, i was ready to go. 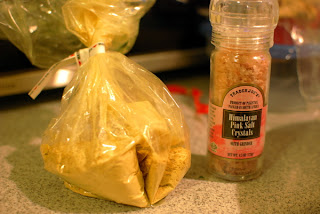 i started snipping the leaves off of the stems, which was kind of a pain in the ass.  and, not knowing if this was going to be a success or not, i did just enough to cover one cookie sheet's worth. 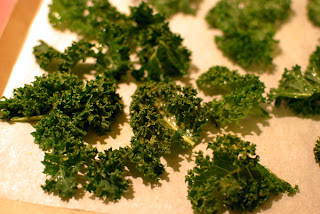 i drizzled it with some olive oil, sprinkled some of the sea salt and nutritional yeast on top, put it in the oven, and hoped for the best.  about 13 minutes later, i opened the oven door, gingerly tapped on one of the leaves, and found that it was perfectly crispy.  out the pan came, and look at how much they shrank! 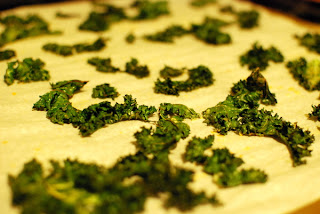 they look kind of pathetic, huh?  i picked up a small piece and popped it in my mouth and - yum.  it was crunchy, light, salty, a little nutty from the nutritional yeast.  i was pretty stoked until i swallowed and a really bizarre aftertaste hit me.

but i didn't want to give up that easily.  i tried a couple more pieces, and the flavor grew on me.  i'm still not a fan of that slightly bitter aftertaste, but i can deal with it.  it kind of reminded me of this stuff, my other favorite: 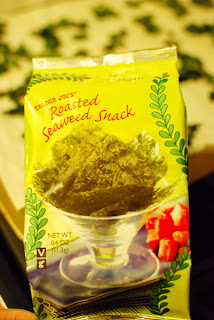 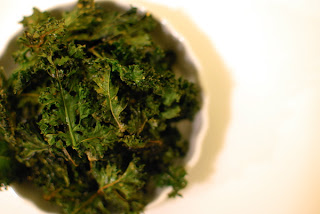 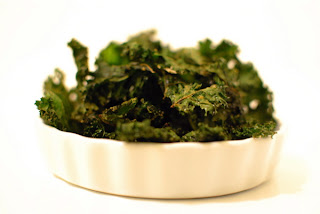 i set the little dish on the table as i served dinner and got some curious looks from everyone sitting there.  "what the hell is that?" the hub wanted to know.  "huh, it tastes kind of like sunflower seeds," said brother wan.  and "that is GROSS," from rock-ell.
the teen, however, was willing to try a miniscule piece.  with one hand on her glass of water and the other hesitantly clutching a kale chip, she went for it and chewed.  but she didn't take a swig of her drink right away.  this was a good sign.
"it's not that bad," she told rock-ell.  "actually - " and she reached for another piece - "it's kinda good!"  she ate a few more, and then a few more, and offered a piece to her sister, who was watching closely.  the bean put it in her hand, shook it a few times, smelled it, and finally gave it a try.  i was shocked, as was the rest of the group.
"do you like it?" the teen asked hopefully.  and wonder of wonders, she nodded and accepted a second piece.
i totally did a fist pump directed towards the hub, who still refused to give it a shot.
and the teen continued to munch on the chips until the dish was completely empty.  woo-hoo!
of course, i also had a batch of cookies & cream brownies to share, which the teen had helped me make earlier that day.  haha!  so much for healthy eating. 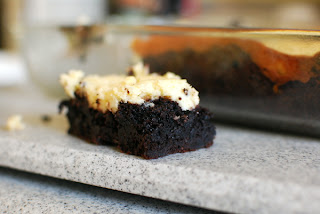 but still - a total WIN.  i think i may make another batch this weekend.  kale chips for everybody!
at March 10, 2011