i am always in awe of other food bloggers' creativity with their recipes.  i really wouldn't have any idea how to formulate something entirely from scratch.  like, how do you know what ingredients should go together, and how much of everything to use for it to turn out right?  i realize that most folks likely go through a ton of trial and error, but still...i'm not on that level.  and i hate to put so much effort into something that might end up tasting like ass on toast.  not to mention the waste that that must produce.

so, full disclosure: this deliciousness i'm about to share with you isn't really my idea at all.  it comes from my friend bridget at the bake at 350 blog, and last week she tweeted a link to her newest creation - peppermint popcorn crunch.  now, i admit that i didn't get all tingly at first at the idea.  but as i kept going back to it in my head i knew i had to make some, stat.  peppermint is one of my very favorite flavors, and this sounded like a fun snack to make and eat.

sadly, even after checking several four different stores, i couldn't find the candy cane melts she'd used in hers.  and i wasn't really feeling the popcorn idea.  mind you, i love popcorn.  a lot.  but i thought maybe i could throw a twist in this idea of hers to suit my craving.  and so i picked up a box of rice chex, which is my favorite out of the various types of chex cereal.  oh, not because i'm asian.  i just think it offers the nicest, lightest crunch out of them all.  i guess i could've used the corn because of the original popcorn in this recipe, but i didn't. so there.

after giving it a little thought, i decided that regular white candy melts would work just fine, and i'd just crush some candy canes and mix those in.  but then i came up with something else:  candy cane kisses.  now, a confession:  i picked up a giant bag of these back in january at an after-christmas sale, and they've been in the pantry ever since.  you know what i'm saying here.  yes, you do. 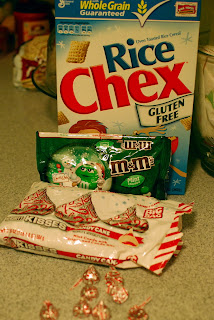 my happy ass stood at the counter and unwrapped a total of 50 candy cane kisses (which smelled and tasted just fine, by the way). 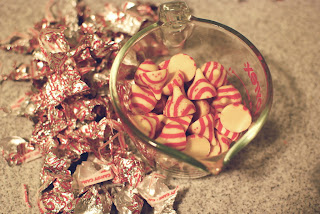 i measured out about 4-5 cups of the cereal. 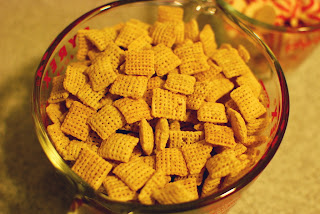 then i took three candy canes down from the dining room light (hahaha!) and smushed them in a ziploc bag till they were peppermint powder.  i guess i really didn't have to since the kisses were sufficiently, uh, candy cane-y.  but i thought it would be pretty.  and tasty. 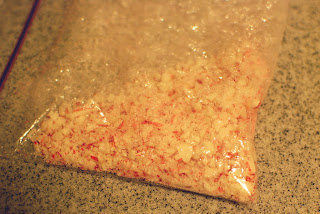 the cereal went into a bowl big enough to mix easily, and then the pulverized candy canes and a couple of handfuls of mint m&ms joined the party. 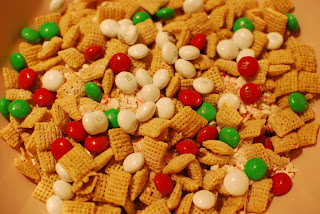 i popped the kisses into the microwave for a minute, which wasn't quite long enough. 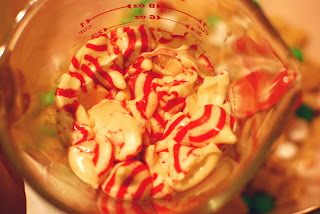 another 20 seconds and a stir with my spatula, and they turned into a pretty pink-ish gob of goo. 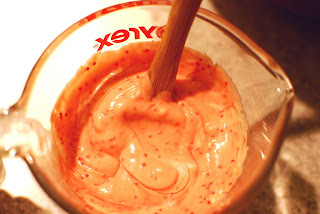 it got drizzled on top of the cereal mixture and then mixed in thoroughly. 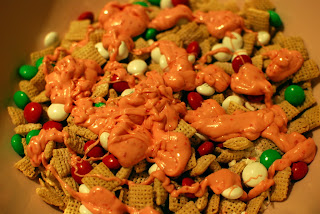 bridget thought that it might end up a little sticky with the kisses instead of the candy melts, but i spread it out on a piece of wax paper and after a little while, it dried out perfectly. 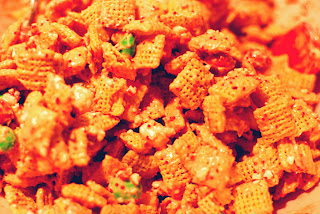 yes, yes, it does rather resemble vomit in that picture.  but it's really good vomit.  really, it is!

you simply must make this.  whether you make my version or the original...if you like peppermint, this stuff is most definitely for you.  now, go!  off to the grocery store with you.  and enjoy.
at December 14, 2011