the teen and i have discovered yet another food truck to chase.  i've actually tried to sample the baconMANia truck's wares once before, but got shut down before i could even place an order.  so when twitter alerted me to a scheduled stop in north orange county one evening, i knew we had to give it a shot.  plus, we'd already decided to head down to disneyland (shocker, i know), so it was really on our way.  and we didn't want to have dinner in the parks - two birds, one stone.  excellent.

we were stoked when we rolled up and found that there was no line for any of the handful of trucks grouped together in the parking lot.  of course, i only took a picture of the one we were there for. 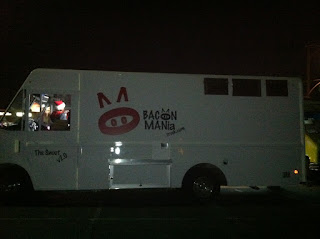 after perusing the menu, we made our selections. 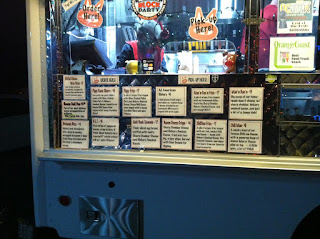 the teen went with the pulled pork sliders.  after savoring every morsel, she vowed to double up her order the next time.  and she talked about them all night - i guess they were just. that. good. 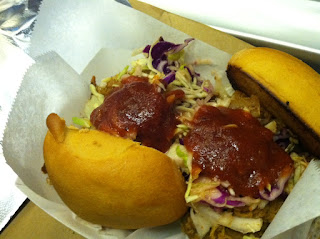 i decided to try a couple of appetizers.  first, the bacon cheese crisps:  they seriously took shredded cheddar and bacon bits, fried them together into two big ass crispy chips, and served 'em up with sour cream for dipping.  these were really good (duh, it's bacon and cheese. what's not to love?), but after eating the first one even i was kinda over it.  blasphemy, i know.  and it's not like i wouldn't order them again.  ha! 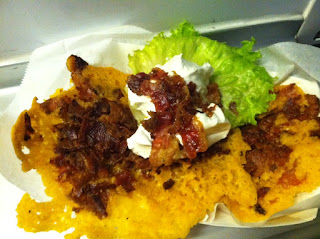 appetizer #2 was the bacon ball duo - a PB&J (you read that right) bite and a ball of gooey mac & cheese wrapped in bacon and deep fried.  while that may sound super wacky and maybe not so appetizing...it was.  oh, it WAS. 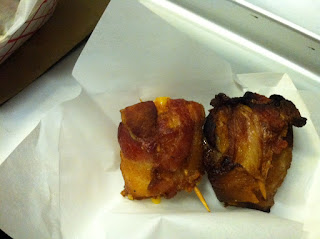 last but not least, there was dessert.  and again, you may gag a little at the description (or find yourself slightly aroused, i'm not judging), but don't knock it till you try it.  much like the bacon ball duo, these are super moist, uber rich chocolatey brownie bites wrapped in bacon, deep fried, and then drizzled with hershey's syrup.  hot damn. 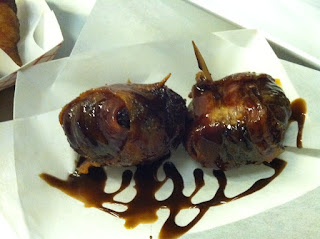 the three of us shared these (yup, even the bean - she heard "brownie" and she was all in) and mmmm'd and aaaaahhhh'd through every bit.  it really looks and sounds "cuscusting," as the bean would say, but honestly...SO GOOD.

our arrival at disneyland was perfectly timed - there was some fancy light show happening on the giant tree on main street, and the "snow" was pouring out from the rooftops. 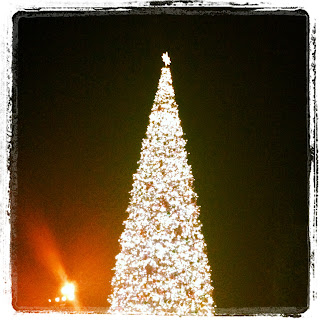 still enchanted with the fake snow, we managed to sweet-talk the bean into trying a new ride - the recently revamped "star tours."  she was just tall enough for it, and although she was a little skeptical, we managed to distract her with the way cool glasses they give you to fully enjoy the experience. 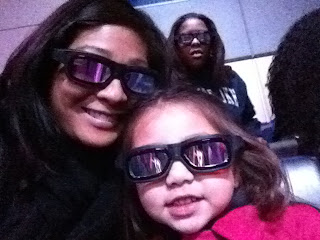 the lady behind us looks about as excited as the bean ended up being when it was over.  you know, i've always wonder how many random folks' photos i've landed in over the years.  i bet it's a lot, considering my penchant for photobombing.

so anyway, despite the "new and improved"-ness of the ride, the teen and i exchanged wrinkly-nosed glances as we took our seats.  it seriously smelled like fourteen hundred pairs of stinky ass feet up in there.  gag.  and the bean clutched our hands for dear life as the simulated ride jostled and bounced and swerved her little self in her seat.  suffice it to say that she didn't like the ride one bit.  "that was too much fun for me," she said.  heh.

and so although the clock was ticking (the parks close early from monday-wednesday, like at 9), we headed deep into fantasyland to indulge her sole request for her favorite attraction - "it's a small world."  oy. 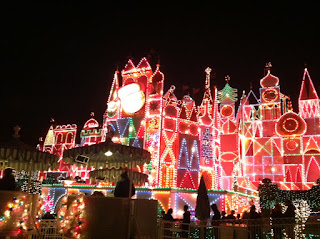 i say "oy" because unlike every other time we've been on this ride, there was an extra-long line.  like, 30 minutes long.  ugh.  the teen was kinda stabby over it. 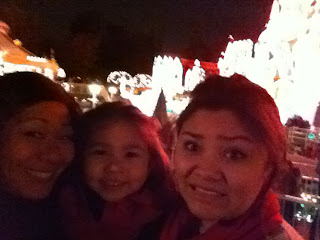 but then as we shuffled along with the rest of the parkgoers, the lights went out and all of a sudden, the façade turned into a movie screen.  we were mesmerized as the music played and the images whirled and flashed and danced on the screen. 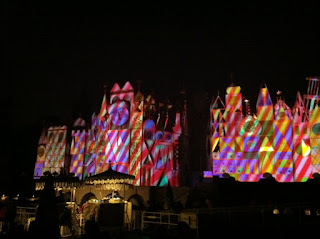 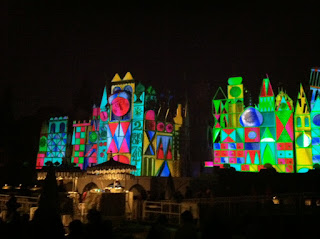 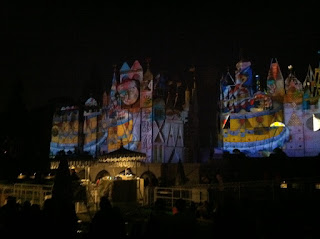 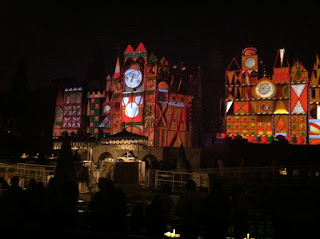 on our way out we admired the castle, all dressed up for the holidays. 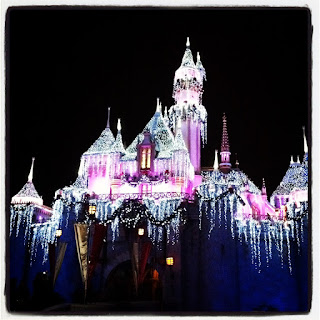