did you know that the traditional 6th anniversary gift is CANDY?

actually, you probably don't really care.  i don't think most people really bother to follow the traditional gift thing anymore, if they ever did.  but you know i'm all about that shit.  i know, it's silly, but it's fun.  the hub totally chuckled when i filled him in on this year's theme, because he was getting off so easy.  i, on the other hand, wasn't so lucky.  he's not a big candy fan, so i had to get creative.  you know we just exchange small gifts based on that tradition anyway - not really a huge deal.

and it was easier than i anticipated.  i turned to the google and in no time placed an order for my gift, which arrived less than a week later.  wan-niversary fell on a sunday this year, on the same day as the bean's preschool christmas program.  so with the teen and rock-ell home and willing to babysit the bean the evening before, we decided to take off and have a nice dinner, just the two of us - a rare occasion these days.

of course, we found ourselves in the same quandary as last year.  weekend evenings in december are booked solid for holiday parties and the like, and as we headed towards pasadena the hub struck out with three restaurants in a row.  d-oh.  but sushi was available, and since there's pretty much no time that it doesn't sound good to either of us, we were happily ensconced at a sushi bar munching on delicious tidbits of fish in no time.  not wanting to stay out too late, we strolled through old town pasadena after dinner, stopping in a store to browse now and then, and were back home before 10:30.

now i know what you fools want to see.  and i'm not one to disappoint.  so here it is: the annual bridal wan-niversary twirl.

you can see that i'm running out of ideas for this annual tradition.  forgive me.  i was honestly just thrilled to be able to put it on again and get it zipped all the way up and stuff.  ya dig?

the teen decided to join me in the silliness, and we decided to re-enact one of my favorite pictures from our wedding day.  then: 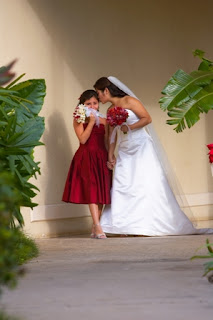 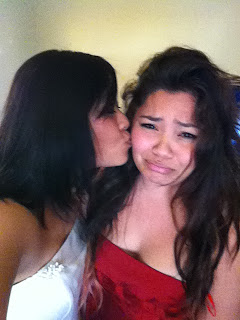 the bean woke up from her nap and was not amused.  "mommy, i don't LIKE that dress.  i like your regular clothes!" 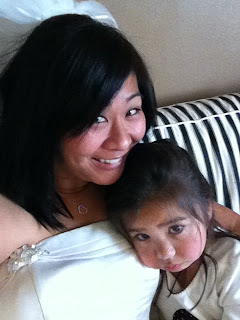 much later, after the bean's triumphant turn in her program (which deserves its own post, coming soon), i found this waiting for me with a card. 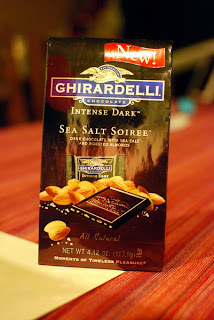 and these were scattered all around the house in random places like this: 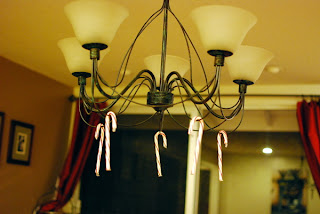 i'd asked the teen to pick up a gift bag for me on her trip to target the day before.  "something for a guy, you know, manly colors and such," i said.  this is what she came back with: 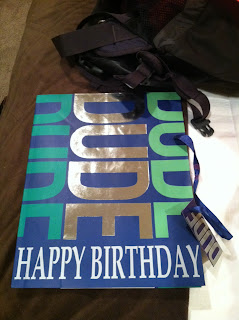 i couldn't stop laughing.  "happy birthday?" i said, and she looked at it again and realized her mistake.  "gah! i just saw "dude" and figured it was perfect!" she groaned.  i thanked her for grabbing it and told her it'd be fine - the birthday part would just add to the silliness of it all.  but then i decided to really make a joke out of it. 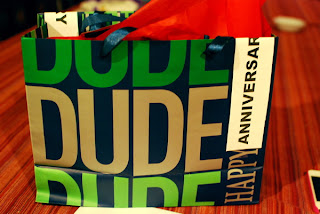 heh.  and inside?  fun boxers and pajama pants. 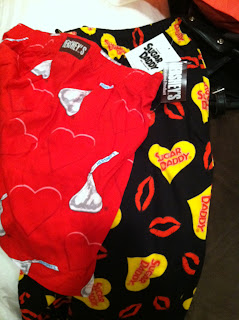 i've said it before, but i reflect upon our wedding and the time since then on every wan-niversary.  i love to reminisce about that wonderful time in our lives that kicked off the happiness we share today, and the walk down memory lane always brings on the warm and fuzzies.  i can hardly remember what life was like before i found the hub, and every day together is an adventure.

happy anniversary, love.  it's been a fun, crazy ride so far and i can't wait to see what lies ahead.

Email ThisBlogThis!Share to TwitterShare to FacebookShare to Pinterest
Labels: love makes the world go 'round, wan-niversary